Imaging technique tells tumor tissue from normal tissue, could be used in operating room for real-time guidance of surgery 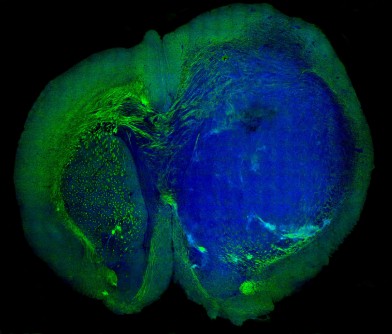 This image of a human glioblastoma brain tumor in the brain of a mouse was made with stimulated Raman scattering, or SRS, microscopy. The technique allows the tumor (blue) to be easily distinguished from normal tissue (green) based on faint signals emitted by tissue with different cellular structures.

Newswise — ANN ARBOR, Mich. — A new laser-based technology may make brain tumor surgery much more accurate, allowing surgeons to tell cancer tissue from normal brain at the microscopic level while they are operating, and avoid leaving behind cells that could spawn a new tumor.

In a new paper, featured on the cover of the journal Science Translational Medicine, a team of University of Michigan Medical School and Harvard University researchers describes how the technique allows them to “see” the tiniest areas of tumor cells in brain tissue.

They used this technique to distinguish tumor from healthy tissue in the brains of living mice -- and then showed that the same was possible in tissue removed from a patient with glioblastoma multiforme, one of the most deadly brain tumors.

Now, the team is working to develop the approach, called SRS microscopy, for use during an operation to guide them in removing tissue, and test it in a clinical trial at U-M. The work was funded by the National Institutes of Health.

A need for improvement in tumor removal

On average, patients diagnosed with glioblastoma multiforme live only 18 months after diagnosis. Surgery is one of the most effective treatments for such tumors, but less than a quarter of patients’ operations achieve the best possible results, according to a study published last fall in the Journal of Neurosurgery.

“Though brain tumor surgery has advanced in many ways, survival for many patients is still poor, in part because surgeons can’t be sure that they’ve removed all tumor tissue before the operation is over,” says co-lead author Daniel Orringer, M.D., a lecturer in the U-M Department of Neurosurgery who has worked with the Harvard team since a chance meeting with a team member during his U-M residency.

“We need better tools for visualizing tumor during surgery, and SRS microscopy is highly promising,” he continues. “With SRS we can see something that’s invisible through conventional surgical microscopy.”

The SRS in the technique’s name stands for stimulated Raman scattering. Named for C.V. Raman, one of the Indian scientists who co-discovered the effect and shared a 1930 Nobel Prize in physics for it, Raman scattering involves allows researchers to measure the unique chemical signature of materials.

In the SRS technique, they can detect a weak light signal that comes out of a material after it’s hit with light from a non-invasive laser. By carefully analyzing the spectrum of colors in the light signal, the researchers can tell a lot about the chemical makeup of the sample.

Over the past 15 years, Sunney Xie, Ph.D., of the Department of Chemistry and Chemical Biology at Harvard University – the senior author of the new paper -- has advanced the technique for high-speed chemical imaging. By amplifying the weak Raman signal by more than 10,000 times, it is now possible to make multicolor SRS images of living tissue or other materials. The team can even make 30 new images every second -- the rate needed to create videos of the tissue in real time.

A multidisciplinary team of chemists, neurosurgeons, pathologists and others worked to develop and test the tool. The new paper is the first time SRS microscopy has been used in a living organism to see the “margin” of a tumor – the boundary area where tumor cells infiltrate among normal cells. That’s the hardest area for a surgeon to operate – especially when a tumor has invaded a region with an important function.

As the images in the paper show, the technique can distinguish brain tumor from normal tissue with remarkable accuracy, by detecting the difference between the signal given off by the dense cellular structure of tumor tissue, and the normal healthy grey and white matter.

The authors suggest that SRS microscopy may be as accurate for detecting tumor as the approach currently used in brain tumor diagnosis – called H&E staining.

The paper contains data from a test that pitted H&E staining directly against SRS microscopy. Three surgical pathologists, trained in studying brain tissue and spotting tumor cells, had nearly the same level of accuracy no matter which images they studied. But unlike H&E staining, SRS microscopy can be done in real time, and without dyeing, removing or processing the tissue.

Next steps: A smaller laser, a clinical trial

The current SRS microscopy system is not yet small or stable enough to use in an operating room. The team is collaborating with a start-up company formed by members of Xie’s group, called Invenio Imaging Inc., which is developing a laser to perform SRS through inexpensive fiber-optic components. The team is also working with AdvancedMEMS Inc. to reduce the size of the probe that makes the images possible.

A validation study, to examine tissue removed from consenting U-M brain tumor patients, may begin as soon as next year.

One of U-M’s top priorities is to help spur economic development through a rich variety of programs in entrepreneurship, tech transfer, venture creation, business engagement, research, and education. Learn more at http://innovationeconomy.umich.edu.# # #