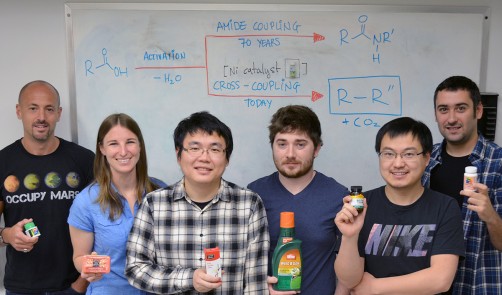 Members of The Scripps Research Institute's Baran lab illustrate how they have repurposed a 70-year old reaction: using a simple nickel catalyst, a limitless array of simple carboxylic acids can be diversified to make new C–C bonds with the same reagents and simple technique of the age-old amide-bond forming reaction. From left to right are Phil Baran, Lara Malins, Tien Qin, Jacob Edwards, Chao Li and Josep Cornella.

Newswise — LA JOLLA, CA—April 21, 2016—Scientists at The Scripps Research Institute (TSRI) have devised a new molecule-building method that is likely to have a major impact on the pharmaceutical industry and many other chemistry-based enterprises.

The method, published as an online First Release paper in Science on April 21, 2016, allows chemists to construct novel, complex and potentially very valuable molecules, starting from a large class of compounds known as carboxylic acids, which are relatively cheap and non-toxic. Carboxylic acids include the amino acids that make proteins, fatty acids found in animals and plants, citric acid, acetic acid (vinegar) and many other substances that are already produced in industrial quantities.

“This is one of the most useful methods we have ever worked with, and it mostly involves materials that every chemist has access to already, so I think the interest in it will expand rapidly,” said principal investigator Phil S. Baran, Darlene Shiley Professor of Chemistry at TSRI.

“This exciting new discovery represents a significant advance in our ability to transform simple organic molecules and to rapidly build complex structures from readily available materials—we expect to use it in both the discovery and development of biologically active compounds that help patients prevail over serious disease,” said co-author Martin D. Eastgate, a Director in Chemical and Synthetic Development at Bristol-Myers Squibb, who participated in the study as part of a long-standing research collaboration between Bristol-Myers Squibb and TSRI.

The new method is a modification of what is already one of the most widely used sets of chemical reactions: amide bond-forming reactions. These occur naturally in cells to stitch together amino-acids into proteins, for example. Since the 1940s, when they became a popular tool for laboratory chemists, they have been instrumental in the discovery of many new compounds as well as new methods for synthesizing compounds.

Amide bond-forming reactions couple carbon atoms on carboxylic acids to nitrogen atoms on another broad class of compounds called amines. The reactions are relatively safe and easy, and produce water, H2O, as a co-product. Chemists have long dreamed of using similarly cheap and easy techniques to make carbon-to-carbon couplings. That would enable them to synthesize, and potentially turn into drugs and other useful products, an enormous number of organic molecules that have previously been inaccessible.

The path to the new invention began with a long-known reaction called the Barton decarboxylation. “We started by asking ourselves what would happen if we could use a metal to trap a radical [a highly reactive charged molecule] generated in the Barton decarboxylation,” said TSRI Research Associate Josep Cornella. “We realized that if we could do that, it would open up a totally new approach to organic synthesis and carbon-carbon coupling.”

A key ingredient turned out to be a “ligand” compound that helps the metal catalyst do its job. “We found that common, readily available bipyridine ligands work best—these help to stabilize the nickel so it can catalyze the reaction,” said TSRI Research Associate Tian Qin.

After optimizing the reaction’s materials and procedures, the team demonstrated it with 78 different starting chemicals—all carboxylic acids—including the statin drug Lipitor, the epilepsy and anxiety drug Lyrica and the antihistamine Zyrtec.

“I know of no easier way to perform the modifications we described in the paper; in fact, many of them have been effectively off-limits until now,” said Baran.

Some of the modifications were used to make new derivatives or variants of existing compounds. Others represented new ways of synthesizing existing products or chemical building-blocks.

TSRI Research Associate Lara Malins showed that the new technique could be applied to directly modify amino acids as they are stitched together during peptide synthesis. Peptides are widely used in biology studies and increasingly used as medicines as well. “We can rapidly modify natural amino acids within a peptide chain to generate valuable ‘designer’ amino acids, which would otherwise require multiple steps to prepare in the lab,” said Malins.

TSRI Research Associate Chao Li found a way to use the new method to combine not just a carboxylic acid and an organic zinc-containing reagent but also a third compound, to yield complex molecules with two new carbon-carbon bonds. “It is a rare example of a multi-component cross coupling reaction and offers new way to construct complex molecule structures,” said Li.

“These structures would be pretty much impossible to make in one step via any other path,” Baran added.

For their part, Baran and his team are now using the new approach to simplify the syntheses of valuable compounds found in nature. They also hope to extend the principles of the new reaction to other classes of organic molecules.

“We’re following up on this at a furious pace,” Baran said.

A behind-the-scenes account of the research, and a video demonstration of the new reaction, can be found at the Baran laboratory blog, “Open Flask.”

Other co-authors of the paper, “A General Alkyl-Alkyl Cross-Coupling Enabled by Redox-Active Esters and Alkylzinc Reagents,” were Jacob T. Edwards and Shuhei Kawamura, of the Baran laboratory at TSRI and Brad D. Maxwell of BMS.