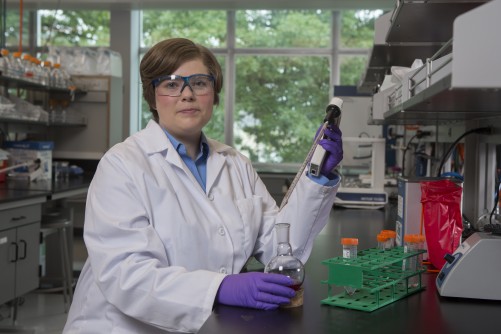 Newswise — BINGHAMTON, NY- Doctors might be able to better detect any disease or disorder that involves inflammation thanks to a new MRI imaging technology co-developed by faculty at Binghamton University, State University of New York.

Amber Doiron, research assistant professor in the biomedical engineering department at Binghamton University, along with a fellow researcher at Temple University, has developed a new MRI imaging technology that, when injected, could help doctors detect inflammation in the body that is indicative of heart disease.

“Doctors use factors like blood pressure and cholesterol level to get an idea of a patient’s risk. Then they use plaque size as a general measure of whether a person has the disease,” said Doiron. “But there’s a fairly poor correlation between plaque size and heart attack or stroke.”

“We created a nanoparticle-based contrast agent for MRI,” added Doiron. “It can theoretically be injected and, when activated, we can actually see areas of inflammation on the MRI scan.”

Being able to detect inflammation is how Doiron’s study will help doctors predict the effects of heart disease with better accuracy. However, the nanoparticle can also be used to pick up other types of inflammation throughout the body. Inflammation is a common factor in many other diseases, so potentially, “any inflammatory disease could be detected in this way,” said Doiron.

The list of diseases or disorders related to inflammation is a long one. It includes common ones like allergies and asthma, as well as the more complex like hepatitis and transplant rejection.

With continued research, this study could help doctors detect inflammatory diseases sooner and pinpoint where the inflammation is in the body via the MRI scan, said Doiron.

Doiron and her collaborator received a two-year, $418,000 grant from the National Institute of Biomedical Imaging and Bioengineering to support this research.

Colloids and Surfaces B: Biointerfaces, Oct-2017