New Report: Top Twelve Ways to Slash Agriculture’s Climate Impact Could Reduce CO2 Emissions by up to 5 Gigatonnes per Year by 2030

Impact of Eating Less Red Meat, More Efficient Production and Use of Fertilizer Calculated; Emissions Can be Cut While Boosting Food Production Globally 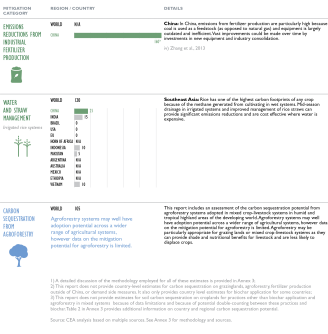 Source: CEA analysis based on multiple sources. See Annex 3 for methodology and sources.

Newswise — SAN FRANCISCO, CA (24 April 2014)—Annual carbon emissions from global agriculture can be reduced by as much as 50 to 90 percent by 2030—the equivalent of removing all the cars in the world—according to a comprehensive new report released by Climate Focus and California Environmental Associates. The study highlights twelve key strategies—led by reduced global beef consumption, reduced food waste and better farm nutrient management and production—that can deliver big climate wins while maintaining food security and building resilience.

The report, Strategies for Mitigating Climate Change in Agriculture, offers a silver lining to the grim prognosis delivered by the Intergovernmental Panel on Climate Change (IPCC) this month. Overall, opportunities in Brazil, China, the European Union, India and the U.S. can provide the largest impact on global emissions.

The report, which reviewed and synthesized a wide range of literature on agriculture and climate change, including some unpublished data, stresses the fundamental yet under-emphasized role that consumption plays in fueling food-related emissions. It estimates that changing diets and reducing food waste in key countries could cut over three gigatonnes of carbon dioxide per year.

“By reducing the climate impact of the food we eat, we can improve our health and the health of the planet,” said Dr. Charlotte Streck of Climate Focus, co-author of the study. “By making the way we produce food more efficient, farmers can reap the benefits of increased production while decreasing the environmental impacts of farming. The energy and transport sectors have seen a significant growth in innovation needed to ensure the long term sustainability of the sectors. It is time that agriculture followed.”

The study also shows that making our food system more efficient and eating healthier food would allow us to feed the growing population, expected to surpass 9 billion people by 2050, and limit the sector’s significant climate footprint.

“There are so many ways in which policymakers can help farmers boost productivity while mitigating climate change,” Streck said. “We need to dispel the notion, once and for all, that productivity and sustainability can’t work hand in hand.”

Too Much of a Good Thing is Not a Good ThingThe report finds that 70 percent of direct greenhouse gas emissions from agriculture come from livestock, in particular from cows, sheep and other grazing animals. Much of these emissions could be eliminated if beef demand were reduced, particularly in two countries: the U.S., currently the world’s biggest consumers of red meat, and China, where demand for beef is set to rise rapidly.

The U.S., where Meatless Mondays have taken hold and doctors increasingly advise patients to lay off the red meat, is already beginning to consume less beef. Per capita beef consumption dropped from its peak of 88.8 pounds in 1976 to 58.7 pounds in 2009, and consumer research indicates that the recent economic downturn alongside concerns of red meat’s health impacts have suppressed beef consumption further—though consumption remains excessive by global standards. Considering beef’s immense share of livestock carbon emissions—six times greater than poultry on a per unit basis—and its impact on tropical deforestation, the report recommends national public relations campaigns to continue this trend.

China, on the other hand, could avoid emissions if it were to shift away from its projected trend of becoming a beef eating nation. Increasingly affluent, and influenced by western culture, the country’s consumers are poised to ramp up their red meat consumption by 116% by 2050.

“Because China already has a climate-friendly diet and hasn’t yet embraced beef, it’s still possible to discourage the consumption of more beef without changing the country’s traditional beliefs and culture,” said Amy Dickie of California Environmental Associates, co-author of the study. “Steering the Chinese diet in a more climate-friendly direction would yield enormous benefits for the country’s health and food security—as well as the global climate.”

The report cites the global public relations campaign designed to curb shark fin soup consumption in China, underpinned by the national government’s prohibition on serving the dish at official banquets. These efforts cut shark fin imports by an enormous 50-70 percent, helping to conserve dwindling shark populations around the world. The report suggests that a similar effort could persuade diners to eat less meat altogether or, at least, to appreciate healthier, less water-intensive and less climate-intensive meats like pork or chicken.

Waste Not, Want NotEliminating food waste in the U.S. and China, as well as food loss in Sub-Saharan Africa and South and Southeast Asia, could also put a major dent in agricultural emissions. Globally, between 30 and 40 percent of all food is lost as it travels along the supply chain from the farm to the consumer. As food waste is a byproduct of inefficient production, storage, distribution and consumption practices, there are vast opportunities for savings for farmers, the private sector and consumers. Some affordable fixes include the following.

• In the U.S., confusion surrounding ‘sell by’ and ‘best by’ dates and other food labels, which often mislead consumers into tossing perfectly good food, should be addressed.• In the U.S. and the European Union, the practice of tossing an enormous amount of food for aesthetic reasons—not having the right shape or color—before it even reaches consumers should be discouraged. • In China and the U.S., portion sizes in restaurants and catering should be slimmed down. • In Southeast Asia and Sub-Saharan Africa, improving cooling and storage practices would prevent spoilage and food losses.

Chew on ThisSimilar to the demand-side findings, many of the production-side recommendations focus on reducing emissions from ruminants, animals—including cows, sheep, goats and buffalo—with a four-chamber stomach that emit methane during the digestion process. This process, called enteric fermentation, more fondly referred to as ‘cow burps,’ is responsible for over 40 percent the agricultural sector’s direct emissions.

“There’s no way around it,” said Streck. “Cows are incredibly inefficient food sources. They eat an enormous amount of feed and require a lot of land and water resources. Pigs, chickens and sustainably caught or raised fish, not to mention non-meat proteins are so much better for the climate—and healthier for people as well.”

Streck noted, however, that for millions of farmers in Sub-Saharan Africa, cattle often offer a variety of benefits, such as providing essential protein and pulling ploughs and carts, that need to be considered when gauging what regions to target. The report recommends two key tactics for eliminating livestock-production emissions. In Brazil, it can take up to 36 months for cows to reach slaughter weight. In the U.S., it only takes around 18 months. Improving grazing management in South America’s cattle hub would make the country more efficient beef producers. Likewise, in India, feeding cattle and buffalo healthier diets would ramp up milk production while reducing the per-gallon climate footprint.

Farmers can also drastically reduce emissions by changing the way they grow food on their fields and pastures. In industrialized countries, particularly China, agriculture uses too much fertilizer. Most farmers in China could reduce fertilizer use by 30 to 60 percent without harming yields. Exacerbating this problem, coal—rather than more efficient natural gas—is used as the primary feedstock in Chinese fertilizer production. Fertilizer is also over-applied in India and the U.S., although domestic production is much more efficient.

Production PotentialThe report recommends pairing demand-side interventions with efforts to improve the efficiency of production. One of the largest challenges in containing the growth of agricultural GHG emissions is the diffuse nature of production. In the aggregate, the emissions reduction potential of the agricultural sector through supply-based approaches is nearly 2 Gt CO2e per year by 2030, including efficiencies gained in fertilizer production in China. These emissions reductions represent about a 30 percent reduction from 2030 levels. In most cases, these interventions would yield productivity gains and ought to be in the best interest of farmers and governments.

Priority focus areas include: reducing emissions from the largest cattle herds that are not produced as efficiently as they could be (e.g., Brazil’s cattle population and India’s dairy herd), reducing fertilizer use and production in China, reducing rice emissions in Southeast Asia, and improving stored manure practices in industrialized livestock systems.

Carbon StorageThe report also stresses the unique role that agriculture can play in sequestering, or storing, carbon in croplands, grazing lands and agroforestry. The study suggests, for example, that Brazil could integrate silvopastoral systems—a combination of crops, trees and livestock—and boost the quality of the grasses on its pastures as a means to store carbon. In turn, feeding cattle higher-quality food could lead to fewer emissions from deforestation, as ranchers would not need to chop down forests to create new pastures.

“There is a scientific debate about how effective different practices are at sequestering carbon, and quantifying the impacts of these efforts can be a challenge. Nonetheless, it’s undisputed that increasing carbon leads to increased soil fertility and water retention, a boost to farmers,” Dickie said. “The world should embrace available opportunities to boost the carbon in agricultural systems as long as they complement efforts to reduce emissions and boost food security. Especially in cases when these practices require little effort but offer significant potential benefits.”

Productivity MattersOn par with the transportation sector, the production and consumption of food is responsible for around a fifth of global greenhouse gas emissions. And when ranchers and farmers need new land for food production, they clear forests, making agriculture the leading cause of forest destruction, another major contributor to climate change.

“Agriculture is the largest cause of deforestation worldwide,” Dickie said. “Improvements to agricultural practices, as we’ve highlighted in this report, have so many benefits, including a reduction in deforestation and pollution of waterways.”

However, despite agriculture’s massive contribution to climate change—as well as its potential to reduce greenhouse gas emissions—agriculture still hasn’t received the attention it deserves at the international climate talks, the report states.

One reason for the holdup, Streck said, is the belief that agricultural productivity and sustainable farming are mutually exclusive. The report shows that this is not the case, she added.