On May 23, 2011, a think-tank of experts organized by Gazi University and EHT convened at a workshop in Istanbul, Turkey to share explosive independent studies on this topic. Titled “Science Update: Cell Phones and Health,” the workshop will be held in Cibali Hall at the Kadir Has University, which is located in Istanbul, Turkey. Dr. Devra Davis and Prof. Nesrin Seyhan discuss highlights. 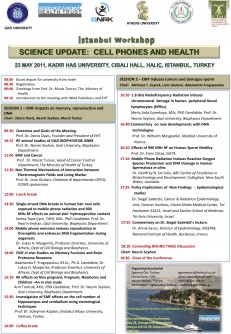 Editor’s note: Scientific papers and bios available for media interested in learning more about the different studies. We are also making available presenters at the conference. A program has been provided with this story. Newswise — Cell phones are a ubiquitous part of our lives. New independent studies offer stunning proof that confirms findings from the Council of Europe—pulsed digital signals from cell phones disrupt DNA, impair brain function and lower sperm count. A meeting convened by Environmental Health Trust, with the Turkish cancer society, and Gazi University, revealed new research on this important issue showing damage to DNA, brain and sperm. Dr. Devra Davis, a member of a Nobel Peace Prize team, chairs this meeting with Prof. Nesrin Seyhan , WHO and NATO advisor who is head and founder of Biophysics Department and Bioelectromagnetics Laboratory at Gazi University in Ankara and founder of the Non-Ionizing Radiation Protection (GNRP) Center.

Prof. Seyhan’s work confirms and strengthens the finding, that just four hours of exposure to RF-EMF disrupts the ability of human brain cells to repair damaged genes. Other new important work from Australia shows damage to human sperm. “We are deeply concerned about what this could mean for public health,” noted Prof Seyhan.

“This work provides a warning signal to all of us. The evidence justifies precautionary measures to reduce the risks for everyone of us,” says Prof. Wilhelm Mosgoeller from the Medical University of Vienna who has led European research teams, who found that RF-EMF induce DNA breaks. New studies carried out by scientists in Turkey, Russia and Israel, have investigated a variety of biological effects triggered by cell phones. Two years after false accusations against scientists who described DNA breaks, now the recent results finally show, that exposure induced DNA breaks are real.

On May 23, 2011, a think-tank of experts organized by Gazi University and EHT convened at a workshop in Istanbul, Turkey to share explosive independent studies on this topic. Titled “Science Update: Cell Phones and Health,” the workshop will be held in Cibali Hall at the Kadir Has University, which is located in Istanbul, Turkey.

The workshop is co-sponsored by leaders in cell phone safety, including the Environmental Health Trust, The International Commission on Electromagnetic Safety, Gazi University and Athens University. The workshop coincides with the launch of Dr. Davis’s book, Disconnect: The Truth About Cell Phone Radiation, What the Industry Has Done to Hide It, and How to Protect Your Family (Innobook, 2011) in Turkish.

Impact of Cell Phones to Reproductive Heath and Cell DeathAmong the highlights of the conference a research team at the University of Athens will discuss how insect studies have demonstrated that acute exposure to GSM (Global System for Mobile) signals brings about DNA fragmentation in insects’ ovarian cells, and consequently a large reduction in the reproductive capacity of the insects. Further studies demonstrated that long exposures induced cell death to the insects in the study.

Cell Phones Impact to the FetusWorkshop attendee Dr. Adamantia Fragopoulou, leader of a team at the University of Athens, will share a finding about embryonic development taking place in the presence of a mild electromagnetic field. Throughout the gestation period, exposure to radiation for just six minutes a day affects the bone formation of fetuses. The team suggests that this is possibly caused by the interaction of cell phone radiation with crucial molecules and ions involved in embryogenesis.

Cell Phones and How it Impacts the of the Young Brain Dr. Seyhan will share work performed at Gazi University demonstrating that the increasing use of cell phones—and the increasing number of associated base stations—are becoming a widespread source of non-ionizing electromagnetic radiation. This work suggests that some biological effects are likely to occur even with low-level electromagnetic fields. The team concluded that 900 and 1,800 MHz radiation levels is related to an increase in the permeability of the blood-brain barrier in young adult male rats. The rat’s brains can be used to correspond to the brains of human teenagers. This research is motivating by the fact that children are increasingly heavy users of cell phones; at higher frequencies, children absorb more energy from external radio frequency radiation than adults, because their tissue normally contains a larger number of ions and so has a higher conductivity. They conclude limiting cell phone and cordless phone use by young children and teenagers to the lowest possible level and urgently ban telecom companies from marketing to them.

In addition, research from a team at the University of Athens will share their studies demonstrating that rats exposed to cell phone radiation were unable to remember the location of places previously familiar to them. This finding is of potentially critical importance for people, who heavily rely on spatial memory for recording information about their environment and spatial orientation.