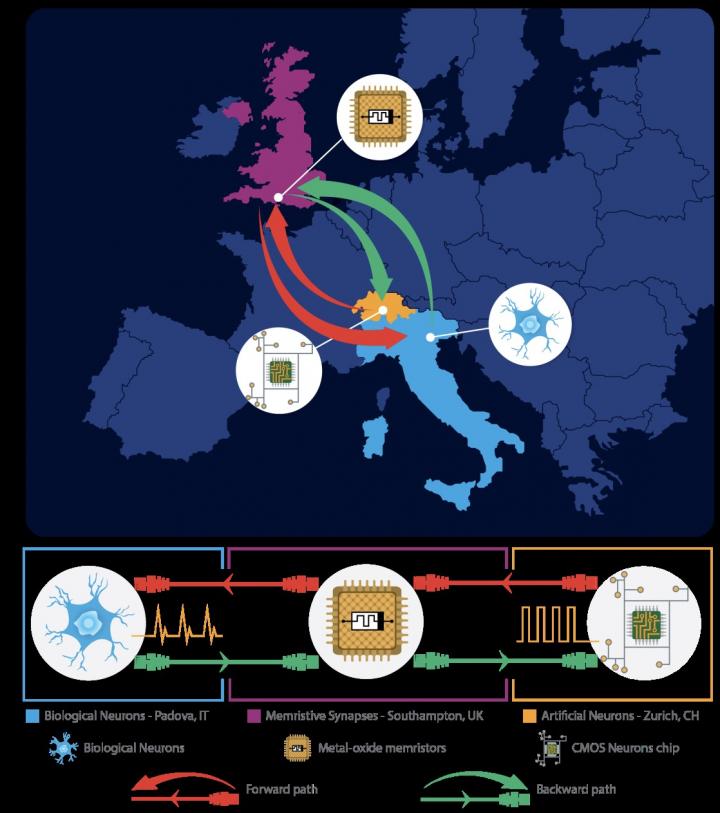 Newswise — Brain functions are made possible by circuits of spiking neurons, connected together by microscopic, but highly complex links called 'synapses'. In this new study, published in the scientific journal Nature Scientific Reports, the scientists created a hybrid neural network where biological and artificial neurons in different parts of the world were able to communicate with each other over the internet through a hub of artificial synapses made using cutting-edge nanotechnology. This is the first time the three components have come together in a unified network.

The Southampton based researchers captured spiking events being sent over the internet from the biological neurons in Italy and then distributed them to the memristive synapses. Responses were then sent onward to the artificial neurons in Zurich also in the form of spiking activity. The process simultaneously works in reverse too; from Zurich to Padova. Thus, artificial and biological neurons were able to communicate bidirectionally and in real time.

Themis Prodromakis, Professor of Nanotechnology and Director of the Centre for Electronics Frontiers at the University of Southampton said "One of the biggest challenges in conducting research of this kind and at this level has been integrating such distinct cutting edge technologies and specialist expertise that are not typically found under one roof. By creating a virtual lab we have been able to achieve this."

The researchers now anticipate that their approach will ignite interest from a range of scientific disciplines and accelerate the pace of innovation and scientific advancement in the field of neural interfaces research. In particular, the ability to seamlessly connect disparate technologies across the globe is a step towards the democratisation of these technologies, removing a significant barrier to collaboration.

Professor Prodromakis added "We are very excited with this new development. On one side it sets the basis for a novel scenario that was never encountered during natural evolution, where biological and artificial neurons are linked together and communicate across global networks; laying the foundations for the Internet of Neuro-electronics. On the other hand, it brings new prospects to neuroprosthetic technologies, paving the way towards research into replacing dysfunctional parts of the brain with AI chips."