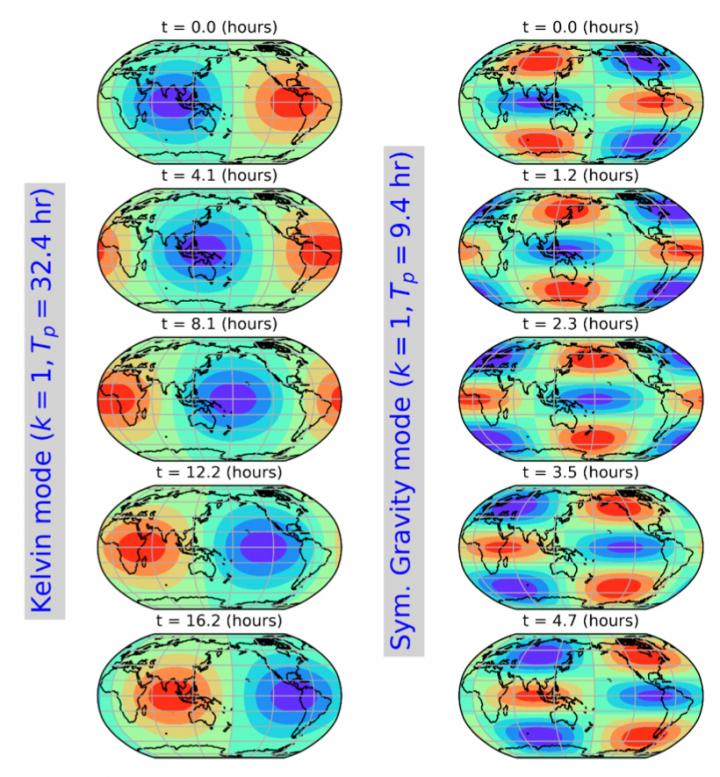 A checkerboard pattern of low (blue) and high (red) pressure areas moving eastward through time, generated by just two of the ringing vibrations of the global atmosphere (periods = 32.4 hrs and 9.4 hrs).

Newswise — A ringing bell vibrates simultaneously at a low-pitched fundamental tone and at many higher-pitched overtones, producing a pleasant musical sound. A recent study, just published in the Journal of the Atmospheric Sciences by scientists at Kyoto University and the University of Hawai'i at Mānoa, shows that the Earth's entire atmosphere vibrates in an analogous manner, in a striking confirmation of theories developed by physicists over the last two centuries.

In the case of the atmosphere, the "music" comes not as a sound we could hear, but in the form of large-scale waves of atmospheric pressure spanning the globe and traveling around the equator, some moving east-to-west and others west-to-east. Each of these waves is a resonant vibration of the global atmosphere, analogous to one of the resonant pitches of a bell. The basic understanding of these atmospheric resonances began with seminal insights at the beginning of the 19th century by one of history's greatest scientists, the French physicist and mathematician Pierre-Simon Laplace. Research by physicists over the subsequent two centuries refined the theory and led to detailed predictions of the wave frequencies that should be present in the atmosphere. However, the actual detection of such waves in the real world has lagged behind the theory.

Now in a new study by Takatoshi Sakazaki, an assistant professor at the Kyoto University Graduate School of Science, and Kevin Hamilton, an Emeritus Professor in the Department of Atmospheric Sciences and the International Pacific Research Center at the University of Hawai?i at Mānoa, the authors present a detailed analysis of observed atmospheric pressure over the globe every hour for 38 years. The results clearly revealed the presence of dozens of the predicted wave modes.

The study focused particularly on waves with periods between 2 hours and 33 hours which travel horizontally through the atmosphere, moving around the globe at great speeds (exceeding 700 miles per hour). This sets up a characteristic "chequerboard" pattern of high and low pressure associated with these waves as they propagate (see figure).

"For these rapidly moving wave modes, our observed frequencies and global patterns match those theoretically predicted very well," stated lead author Sakazaki. "It is exciting to see the vision of Laplace and other pioneering physicists so completely validated after two centuries."

But this discovery does not mean their work is done.

"Our identification of so many modes in real data shows that the atmosphere is indeed ringing like a bell," commented co-author Hamilton. "This finally resolves a longstanding and classic issue in atmospheric science, but it also opens a new avenue of research to understand both the processes that excite the waves and the processes that act to damp the waves."

So let the atmospheric music play on!