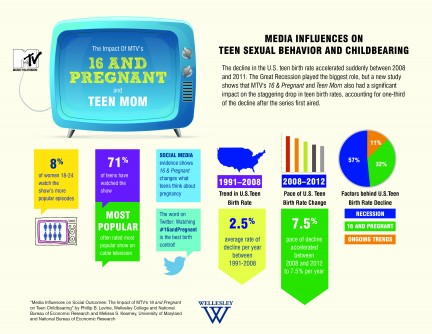 Newswise — WELLESLEY, Mass.— Despite concerns that turning teen moms into reality TV stars has glamorized teen pregnancy, a new study shows that MTV’s 16 and Pregnant and Teen Mom have had a more powerful impact in the opposite direction: the series has significantly reduced births to teens.

The research, coauthored by Wellesley College economist Phillip B. Levine and University of Maryland economist Melissa S. Kearney, finds that MTV’s 16 and Pregnant and Teen Mom led to a 5.7 percent reduction in teen births, which accounts for around one-third of the overall decline in teen births in the year and a half following the show’s introduction in 2009. The study, “Media Influences on Social Outcomes: The Impact of MTV’s 16 and Pregnant on Teen Childbearing,” will be published by the National Bureau of Economic Research, January 13, 2014.

As Kearney and Levine addressed in an earlier study, the U.S. teen birth rate ranks high among developed countries, although it has been declining dramatically over the past 20 years and is now at a historic low. In particular, the U.S. teen birth rate fell rapidly between 2008 and 2012. The researchers showed that the Great Recession played the biggest role, explaining more than half of the staggering drop in the most recent, sharp decline. However, the economists also theorized that the timing of the introduction of MTV’s 16 and Pregnant is such that it could also have contributed to the staggering drop in teen birth rates. This theory launched the first study to offer a credible estimate of the causal effect of specific media content on teen childbearing rates.

Kearney and Levine investigated whether the show influenced teens’ interest in contraceptive use or abortion, and whether it ultimately altered teen childbearing. “In some circles, the idea that teenagers respond to media content is a foregone conclusion, but determining whether the media images themselves cause the behavior is a very difficult empirical task,” said Professor Kearney.

To determine the show’s impact on teens, Kearney and Levine conducted an in-depth empirical study, analyzing several measures of exposure, including Nielsen ratings data and metrics from Google and Twitter. The researchers then examined the impact on teen birth rates using Vital Statistics Natality microdata.

Kearney and Levine show that 16 and Pregnant and Teen Mom have a large and highly engaged following, win ratings wars, and lead teens to search for and tweet about the themes within. They also find that searches and tweets about birth control and abortion spike exactly when the show is on and in locations where it is more popular. According to Professor Levine, “our use of data from Google Trends and Twitter enable us to provide some gauge of what viewers are thinking about when they watch the show. We conclude that exposure to 16 and Pregnant and Teen Mom was high and that it had an influence on teens’ thinking regarding birth control and abortion.”

Their most important finding, though, is that “the introduction of 16 and Pregnant along with its partner shows, Teen Mom and Teen Mom 2, led teens to noticeably reduce the rate at which they give birth,” according to Kearney and Levine. Their estimates imply that these shows “led to a 5.7 percent reduction in teen births that would have been conceived between June 2009, when the show began, and the end of 2010. This can explain around one-third of the total decline in teen births over that period.”

Although data limitations precluded Kearney and Levine from conducting separate analyses of abortions, the researchers note that teen abortion rates also fell over this period—suggesting that the shows’ impact is likely attributable to a reduction in pregnancy rather than greater use of abortion.

According to the authors, the finding that 16 and Pregnant and Teen Mom had an impact suggests that MTV drew in teens who actually were at risk of teen childbearing and conveyed to them information that led them to change their behavior, preventing them from giving birth at such a young age. “The fact that MTV knows how to make shows that teens like to watch, which speak to them in ways that resonate, presumably is critical to the show’s impact,” they said.

“This approach has the potential to yield large results with important social consequences,” concluded Kearney and Levine. “Typically, the public concern addresses potential negative influences of media exposure, but this study finds it may have positive influences as well.”

"When we developed '16 and Pregnant,' teen birth rates were reported to be on the rise, so we created this series as a cautionary tale on the hard realities of teen pregnancy. We are deeply grateful to the National Campaign to Prevent Teen and Unplanned Pregnancy for their expert guidance," said Stephen Friedman, President of MTV. "We've always believed that storytelling can be a powerful catalyst for change, and are incredibly heartened by this news." “The entertainment media can be, and often is, a force for good,” said Sarah Brown, CEO of The National Campaign to Prevent Teen and Unplanned Pregnancy. “One of the nation’s great success stories of the past two decades has been the historic declines in teen pregnancy. MTV and other media outlets have undoubtedly increased attention to the risks and reality of teen pregnancy and parenthood and, as this research shows, have likely played a role in the nation’s remarkable progress.”

About the University of MarylandThe University of Maryland is the state's flagship university and one of the nation's preeminent public research universities. A global leader in research, entrepreneurship and innovation, the university is home to more than 37,000 students, 9,000 faculty and staff, and 250 academic programs. Its faculty includes three Nobel laureates, two Pulitzer Prize winners, 49 members of the national academies and scores of Fulbright scholars. The institution has a $1.8 billion operating budget, secures $500 million annually in external research funding and recently completed a $1 billion dollar fundraising campaign.

About Wellesley CollegeSince 1875, Wellesley College has been a leader in providing an excellent liberal arts education for women who will make a difference in the world. Its 500-acre campus near Boston is home to 2,400 undergraduate students from all 50 states and 75 countries.