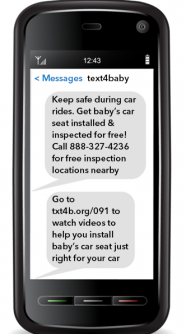 “This study provides the strongest evidence to date that Text4baby reduces health risk beliefs targeted by the text messages. It advances knowledge of the effects of mobile health programs,” says lead author of the study W. Douglas Evans, PhD, who is a professor of prevention and community health at Milken Institute SPH.

The research team, led by Evans, conducted a randomized controlled trial, supported by a grant from the Telemedicine and Advanced Technology Research Center (TATRC), part of the US Army Medical Research and Materiel Command from December 2011 through September 2013. The research team recruited 943 pregnant women (both active duty and family members) who first presented for prenatal care at Madigan. The study found that “targeted beliefs, including those about the importance of pre-natal health care, the risk of alcohol use during pregnancy and the importance of pre-natal vitamins were more likely to improve given exposure to Text4baby.”

This research study reinforces findings from a previously released randomized evaluation by researchers at Milken Institute SPH which found Text4baby mothers were “nearly three times more likely to believe that they were prepared to be new mothers compared to those in the no exposure control group.” The effectiveness of the service, highlighted through these studies, confirms the Text4baby program model, and can be viewed as a best practice for other mobile health programs, Evans says.

This is the first publication of findings from this study. Future analyses will examine effects of the intervention on behaviors and clinical outcomes.

A copy of the executive summary of Text4baby evaluation report can be found on the Journal of Medical Internet Research website.

About Text4baby:Text4baby is the nation’s only free mobile information service designed to promote maternal and child health through text messaging. A free service of the nonprofit National Healthy Mothers, Healthy Babies Coalition (HMHB), the Founding Sponsor is Johnson & Johnson. Founding partners include Voxiva, The Wireless Foundation and Grey Healthcare Group (a WPP company). Text4baby’s public-private partnership also includes over 1,200 national, state and local organizations including the American Academy of Pediatrics, American College of Obstetricians and Gynecologists and Centers for Disease Control and Prevention. A special thank you goes to the carriers who support Text4baby so the service can be free to the end users. Those carriers are: AT&T, Bluegrass Cellular, Boost Mobile, Cricket Wireless, MetroPCS, Sprint Nextel, T-Mobile, TracFone, U.S. Cellular, Verizon Wireless and Virgin Mobile U.S.A. To learn more, please visit www.text4baby.org.