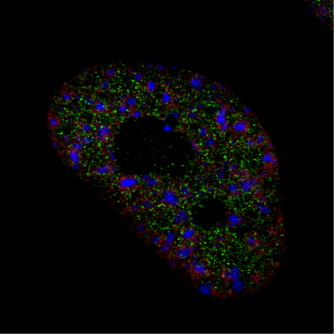 Stuck in senescence, this cell can no longer grow or divide. The Arid1b protein (green) induces this state by regulating the expression of specific genes. In contrast other regions of the DNA (blue) contain genes that are not bound by Arid1b and are not expressed (red).

Newswise — Scientists have shown that a mutation in a gene called Arid1b can cause liver cancer. The gene normally protects against cancer by limiting cell growth, but when mutated it allows cells to grow uncontrollably. The researchers have shown that two existing drugs can halt this growth in human cells. This points to a new approach to treating liver cancer.

These early results could be translated into a treatment relatively quickly, says Jesus Gil of the MRC Clinical Sciences Centre (CSC), based at Imperial College London, and who led the study. This is because the drugs are already used to treat other types of cancer. Gemcitabine is used on bladder, pancreas and ovary cancer, whilst DON has been tested in clinical trials. Both are known to be safe in people so will not require the usual toxicity testing.

According to MacMillian Cancer Support, 4200 people in the UK are diagnosed with liver cancer annually. “Liver cancer is a deadly disease,” says Luca Tordella, a postdoctoral researcher at the CSC who played a key role in the study. He says the new treatment will be most effective in people who have a mutation in the Arid1b gene. “It’s important to better classify patients into groups, according to their genes. One advance of personalised medicine is to understand which drug will work best on you, and which on me.”

The CSC team began by looking for mutations in the DNA of 100 people with liver cancer. They focused in on genes known to regulate a cellular state called senescence. This is a built-in safety mechanism that helps to protect the cell against cancer. Senescence is triggered when a cell grows abnormally fast and, once induced, it acts to keep the cell in limbo, such that it is alive but can no longer grow or divide. Bypassing senescence is a hallmark of many types of cancer.

It has previously been suggested that the Arid1b gene plays a role in liver cancer. The CSC team are the first to show that it does so by disrupting senescence. Working with researchers at the University of Tübingen, Germany, they mutated Arid1b in mice and human cells, and this stopped the cells from entering senescence. When Arid1b was mutated in mice that also had a mutation in the gene Ras, the mice developed liver cancer.

The researchers also identified exactly how Arid1b stimulates senescence. In healthy cells, Arid1b is part of a bigger complex (called SWI/SNF) that regulates the activity of hundreds of genes. One of these genes produces an enzyme that breaks down the building blocks of DNA. Without these blocks, the cell cannot continue to grow and divide so enters senescence. But if Arid1b is mutated, the blocks cannot be degraded and the cell continues to grow, bypassing senescence and potentially growing out of control.

Gil and Tordella have shown that it’s possible to induce senescence by treating human cells, which have an Arid1b mutation, with either gemcitabine or DON. Both drugs inhibit the synthesis of these blocks, called nucleotides, and thereby induce senescence and stop cancer in its tracks.

“Around 20% of patients with liver cancer have mutations on the genes encoding for components of the SWI/SNF complex. What we suggest is if we treat these people with drugs that target the degradation of nucleotides, they will respond,” says Gil. “We plan to continue to research this in the lab to develop treatments to target liver cancer.”

Find out more here and read the full paper here.