24-Feb-2015 11:00 AM EST, by University of Texas Health Science Center at Houston
favorite_border 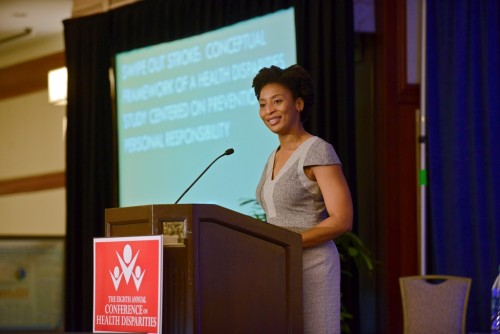 Nneka Ifejika, M.D., M.P.H., speaks at the Eighth Annual National Conference on Health Disparities. She is studying the use of an app to improve the health of minority stroke patients.

Newswise — HOUSTON – (Feb. 24, 2015) – A clinical trial investigating the use of a physician-monitored app to help first-time minority stroke patients become healthier has begun at The University of Texas Health Science Center at Houston (UTHealth).

Nneka Ifejika, M.D., M.P.H., principal investigator, associate professor of neurology and director of Neurorehabilitation at UTHealth, said minorities – particularly African-Americans and Hispanics – have their first stroke 10 to 13 years earlier than Caucasians and are more likely to have a second stroke. They are also more likely to be disabled two years after a stroke, according to research. The racial disparities are linked to poorly managed risk factors and lack of physician care due to inadequate finances and lack of health insurance.

To close the racial disparities gap, Ifejika began investigating the use of an app to encourage minority stroke patients to lose weight as part of her UTHealth Advanced Clinical Design class. Her proposal of the study, “Swipe Out Stroke: Feasibility of Using Mobile Applications to Improve Compliance with Weight Loss in Obese Minority Stroke Patients,” was presented at the Eighth Annual National Conference on Health Disparities late last year. Supporters of the event include the U.S. Department of Health and Human Services. Ifejika also presented her study concept at a roundtable discussion with Health and Human Services Secretary Sylvia Burwell in January.

“This study shows you can take your clinical interests and translate them to research. When I saw patients in the first month after a stroke, they were doing what they needed to be doing because they were scared,” she said. “But after four or five months, they got comfortable and fell into old habits. Their weight started to pick up and they needed increasing levels of medication.”

Her $400,000 study, which will enroll patients for two years, is funded through the Center for Clinical and Translational Sciences by the National Center for Advancing Translational Sciences (UL1 TR000371), part of the National Institutes of Health.The study will look at objective factors such as cholesterol, weight, vital signs and inflammatory markers, and other factors including loneliness and depression. “Those two factors affect a patient’s ability to comply with best medical management,” she said.

Patients are randomized to usual care or the app group. Both groups receive dietary counseling, measuring cups and a cookbook. Instead of the app, the usual-care group receives a food diary. The free app, Lose It!, records food and exercise. An upgraded program called Ascendapp.com, allows Ifejika to see how the participants are doing and send encouraging comments or reminders. There’s also a community group within Lose It! that allows patients to communicate with each other.

“While you’re enrolling the patient, it’s actually about enrolling the entire family,” said Ifejika. “If you have family buy-in, it’s more successful. We not only want to prevent second strokes in patients, but also first strokes in family members.”

Her research has a personal side. Her family history includes hemorrhagic stroke and her mother has had two aneurysms. “It’s more than apparent I have to manage my health,” she said.