16-May-2017 10:05 AM EDT, by National Institute of Biomedical Imaging and Bioengineering 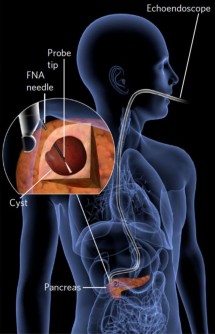 Doctors advance an endoscope fitted with the LSS probe from the mouth to the first part of the small intestine. They then extend an LSS optical probe tip from the endoscope, illuminating the tissue. The tool also allows the doctor to puncture the cyst and perform fine-needle aspiration for biopsy collection.

Newswise — Researchers funded by the National Institute of Biomedical Imaging and Bioengineering (NIBIB) have developed a new tool for detecting early pancreatic cancer. The tool bounces light off targeted tissue to detect structural changes in the tissue, a method called light-scattering spectroscopy (LSS). The researchers performed a series of pilot studies using LSS and accurately distinguished benign cysts, cancerous cysts, and those with malignancy potential 95 percent of the time. The Harvard University team reported their results in the March 13, 2017, issue of Nature Biomedical Engineering 1.

Pancreatic cancer has the lowest survival rate of all major cancers, in part because doctors are unable to detect the disease in its early stage, when the option of successful treatment is still possible.

“This rapid and inexpensive tool augments the current endoscopic technology in identifying benign pancreatic cysts and those with malignant potential at an early stage,” said Behrouz Shabestari, Ph.D., director of the NIBIB Program in Optical Imaging and Spectroscopy. “The method is highly accurate and offers great promise that may help doctors make critical surgical decisions.”

About 20 percent of pancreatic cancers develop from cysts, fluid-filled tissue structures that occur in one of every 50 adults. Doctors routinely use high resolution scanning technologies like CT and MRI imaging systems to detect them. Despite advanced imaging approaches, CT and MRI only provide limited information to distinguish between cancerous, premalignant, and benign cysts, according to the study’s authors.

Currently, the best method that doctors have for distinguishing a mostly harmless pancreatic cyst from a life-threatening cancer is fine needle aspiration (FNA) of fluid, which is accurate only 58 percent of the time. The uncertain diagnosis can cause patients to undergo unnecessary surveillance, have unneeded surgery for benign cysts, or even delay surgery to remove precancerous lesions.

“Unfortunately, patients with untreated malignant cysts have a median survival of just three months. Thus, there is an urgent need for the development of a new diagnostic method to accurately identify pancreatic cysts that need surgical intervention,” said the study’s senior author Lev T. Perelman, Ph.D., professor at Harvard University and director of the Center for Advanced Biomedical Imaging and Photonics at Beth Israel Deaconess Medical Center.

To test the accuracy of the LSS tool, the researchers analyzed the reflected spectra from 13 cysts taken from recent surgeries. In all cases, researchers’ analysis of data from LSS measurements agreed with microscopic examination of tissue samples in identifying benign versus malignant cyst tissue.

Perelman and his team then tested an LSS probe technique performed alongside the endoscopic ultrasound-guided FNA system. They outfitted the aspiration needle with a retractable LSS fiber optic probe to make diagnoses in 14 patients with pancreatic cysts who were undergoing the standard FNA procedure and potential surgery. In each case, they illuminated the cyst tissue with white light and collected multiple readings of the reflected light in matter of seconds. Nine patients whose cysts had been diagnosed as either cancerous or benign all were correctly identified by LSS. The researchers will confirm the accuracy of the other five cases if post-operative tissues become available.

“Currently, it can take days to learn the results of the fine needle aspiration cytological and biochemical evaluation,” Perelman said, explaining that the LSS tool can offer real-time optical biopsy, rapidly distinguishing malignant cysts from benign ones.

The LSS probe for pancreatic cancer detection builds on research that the team published in 2010 in Nature Medicine demonstrating early detection of pre-cancerous tissue in the esophagus. In that study, an endoscope was fitted with an LSS scanning probe that reflected polarized light off esophageal tissue, marking the first time that LSS was used for multispectral imaging of pre-cancer in the gastrointestinal tract in a clinical setting.

While the LSS probe in its current form could significantly advance detection of early pancreatic cancer, it would benefit from additional development and testing, including the engineering to enable scanning of the entire cyst’s internal surface.

This work was funded in part by the National Institutes of Health through grants from NIBIB (EB003473) and the National Cancer Institute (CA205431).