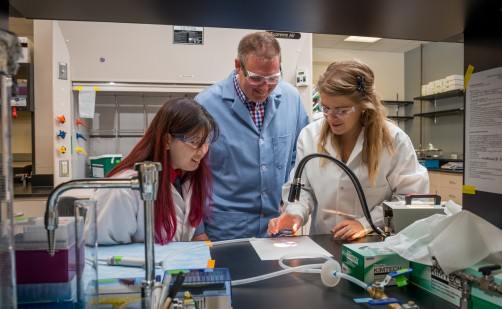 John Slater has received a National Institutes of Health grant to develop a tissue-engineered platform to investigate what regulates organ specificity and why some cells undergo dormancy.

Newswise — A University of Delaware researcher is part of a team that recently received a grant from the National Institutes of Health to develop a new way to examine how cancer cells metastasize.

The grant will be used to develop a tissue-engineered platform to investigate what regulates organ specificity and why some cells undergo dormancy.

Metastasis, which is the development of a malignant growth somewhere in the body other than the primary tumor site, is responsible for 90 percent of cancer-related deaths.

"This statistic indicates the need for a better understanding of what drives metastasis as well as new therapies targeted specifically toward preventing and eliminating metastases," says John Slater, assistant professor of biomedical engineering at the University of Delaware.

Work in Slater's lab focuses on the development of life-like platforms for disease modeling and drug development. He and his group recently developed an image-guided, laser-based fabrication technique that enables them to construct functional vascular networks in hydrogels, which are jelly-like polymeric materials that retain a distinct three-dimensional structure.

He plans to combine this new technology with his team's expertise in the fabrication of engineered microenvironments to generate a three-dimensional vascularized platform made up of organotropic, or organ-specific, micro-tissues that mimic the properties of brain, lung, and bone tissue.

"The resulting organ-specific tissue constructs will be infiltrated by highly metastatic cancer cells, enabling us to gain insight into the mechanisms that govern organotropic metastasis and to examine what happens to these cells after infiltration," Slater says. "This device could aid in the development of new therapeutics targeted specifically at preventing or eliminating micrometastases."

He is collaborating with David Mayerich, assistant professor of electrical and computer engineering at the University of Houston in Texas, and Sylvie Lorthois, director of research at the French National Center for Scientific Research in Toulouse, France, on the project.

Lorthois will provide expertise in multimetric quantification of vascular architecture and computational modeling of transport in these vascular networks.

Funding for the grant, "A Vascularized, In Vitro, Organotropic Metastasis Model to Generate Dormant Micrometastases," totals $593,000 over three years.

The Innovative Molecular Analysis Technologies (IMAT) program was established within the National Cancer Institute to support the development, technical maturation, and dissemination of novel and potentially transformative next-generation technologies through an approach of balanced but targeted innovation.