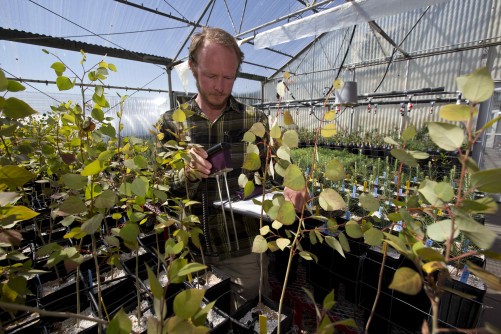 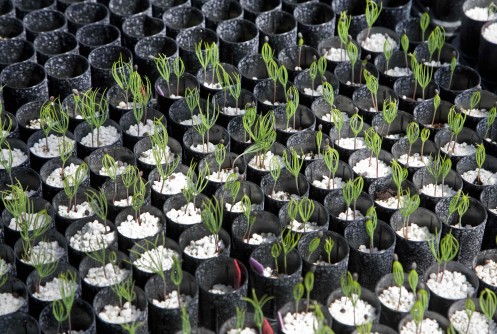 Tree seedlings begin their life at New Mexico State University’s John T. Harrington Forestry Research Center at Mora. As the seedlings grow researchers will subject them to harsh environments to prepare them for life in the Southwest forests.

“We are the largest forest tree seedling nursery in New Mexico that is producing seedlings for restoration,” said Owen Burney, NMSU assistant professor and superintendent of the facility. “We produced 270,000 seedlings this year. We are raising 35 to 40 species for various restoration projects in New Mexico.”

Besides dealing with new high severity fires that increase the acreage to be planted, foresters must deal with low survival rates for newly planted seedlings.

“A study of eight fire sites in Arizona and New Mexico, examining both natural restoration and human reforestation, found the range of survival to be between zero and 60 percent, with the average being 25 percent,” Burney said. “Survival should be measured 5 to 8 years post planting to know whether planted trees will establish.”

Many things play into the survival rate of the seedlings, including growing and planting techniques, climate and precipitation, temperatures and animal activity in the area.

“It comes down to producing seedlings that are going to be successful on a given specific site,” Sloan said. “In forest restoration the goal is long-term. In 30-40 years you want the area to be a forest again. But there are critical front end concerns, details that go into improving seedling survivability.”

As the drought continues to move north and is impacting the higher altitudes of New Mexico, Burney is evaluating how seed source selection influences tree survival.

“Seeds are typically collected from large seed trees with good commercial value located on optimal sites with wet conditions, but is that seed source going to work well in a site, or future climate, that is dry and harsh?” Burney said.

“One option to promote success on these harsh sites is to collect seed from mature trees already located in those types of conditions. We are examining seed sources collected from a southern location and moved north within their normal population range, that potentially could provide some advantage.”

The second part of the study is how the seedlings are grown in the nursery.

“One of our really exciting projects is looking at stressing trees in the nursery by subjecting them to drought in their early stages of development,” Burney said of the research that is the first of its kind in the United States.

“During this phase, we hypothesize that drought-conditioned seedlings will develop structures and processes that make plant hydraulics and water use more efficient within the seedling. In short, we are training them to function with less water so they are already adapted to the harsh planting site,” Burney said.

This concept of raising seedlings using drought-conditioning techniques from the time of germination has not been studied in nurseries. Burney and Sloan are the first to experiment with this technique. They are analyzing the plant’s structure and function to determine the anatomical and physiological impacts.

“We have had our failures and our successes,” Burney said. “One of our current mine restoration projects, which has extremely harsh conditions, has a 99 percent survival rate after the first year.”

Seed selection, nursery culture, and when and how to plant all contribute to the success of the tree’s ability to establish itself in the wild.

“You have to incorporate all of these factors into the planting plan in order to have success,” Burney said. “That’s what’s been missing here in the Southwest and why some of the reforestation efforts are now at 25 percent survival.”