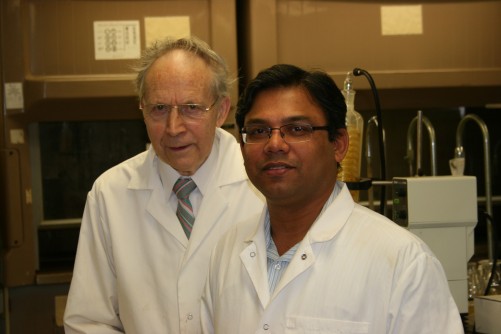 Jonathan Dimmock and Umashankar Das and their team have developed anti-cancer compounds that work by interacting with thiols, naturally occurring chemicals that perform several roles in cells. Their approach offers advantages over existing chemotherapy drugs.

Newswise — SASKATOON – A novel class of compounds developed by a University of Saskatchewan (U of S)-led research team could yield more effective and less toxic chemotherapy drugs to treat cancer.

Team leader Jonathan Dimmock, a medicinal chemistry researcher in the U of S College of Pharmacy and Nutrition, explained their compounds work by interacting with thiols, naturally occurring chemicals that perform several roles in cells.

“Many of the compounds or drugs on the market are those that interfere with nucleic acids,” Dimmock said. “These types of compounds can be very toxic and they can also cause problems of their own, like actually inducing cancer.”

Thiols offer another approach. Among their many roles are defending cells against oxidization and modulating apoptosis—the process in which worn-out cells die. One of the hallmarks of cancer cells is they don’t experience apoptosis and keep dividing out of control.

Umashankar Das, a research scientist in the Department of Chemical and Biological Engineering and long-time collaborator of Dimmock, explained that cancer cells produce an excess of thiols, such as one called glutathione. Knocking down levels of these thiols reduces cancer cells’ ability to resist drugs.

“In cancer cells, glutathione expression is very high, which creates a defense mechanism,” Das said. “Any anti-cancer compound that enters the cell cannot sustain its effect.”

To address this, the team developed a two-stage attack, first knocking down thiol levels to make the cancer cells vulnerable, then hitting them again.

“Over the years, we’ve developed the theory of ‘sequential cytotoxicity,’ which simply means you give an initial attack on the cancer cell and then you give a second chemical attack,” Dimmock said. “The cancer cells may be more vulnerable to the second attack than normal cells.”

Designing molecules that selectively target thiols produced by cancer cells that cause drug resistance is the focus of many years’ work by Dimmock, Das and their collaborators. In their latest study, they tested compounds against cells from nine different types of human cancer, including common types affecting blood, colon, breast, prostate, ovaries, kidneys, and lungs.

“Many of our compounds are what we call multi-drug resistance revertants, so we’re actually creating a much more sensitive cancer cell through this process,” he said.

The team’s latest work is published in the Journal of Medicinal Chemistry. Funding support was provided through the Canadian Institutes of Health Research and other agencies.

Das explained that short term toxicity studies in mice show the compounds are well tolerated. The next step is to take the work into mice cancer models to confirm their anticancer effects in living systems. To this end, the U of S has applied for a patent and set up a technology licensing opportunity to invite partners to help develop these promising compounds.