Cryo-STEM imagery showing the structural and chemical evolution of silicon and the solid-electrolyte interphase (SEI) layer. After the 36th cycle to the 100th cycle the silicon nanowire expands and becomes irregular, mingling with the SEI to form a soft composite structure. 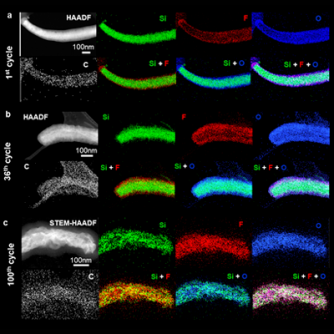 Cryo-STEM imagery showing the structural and chemical evolution of silicon and the solid-electrolyte interphase (SEI) layer. After the 36th cycle to the 100th cycle the silicon nanowire expands and becomes irregular, mingling with the SEI to form a soft composite structure.

Newswise — UNIVERSITY PARK, Pa. — A novel method of characterizing the structural and chemical evolution of silicon and a thin layer that governs battery stability may help resolve issues that prevent using silicon for high-capacity batteries, according to a group of researchers.

The research focuses on the interface of the anode, a negative electrode, and the electrolyte, which enables the charge to move between the anode and the other electrode, the cathode. A solid-electrolyte interphase (SEI) layer usually forms on the surface of an electrode between the solid electrode and the liquid electrolyte and is vital for the electrochemical reaction in batteries, along with governing the battery’s stability. Using silicon as an anode would enable a better rechargeable battery.

“In the last 10 years, silicon has attracted a lot of attention as a high-capacity negative electrode for rechargeable batteries,” said Sulin Zhang, professor of engineering science and mechanics and of biomedical engineering. “Current commercialized batteries use graphite as an anode material, but the capacity of silicon is about 10 times of graphite. There are tens of millions, hundreds of millions even, of dollars invested in silicon battery research because of this.”

This is good news for a society looking to electrify its infrastructure with electric vehicles and powerful portable electronics, however, there is a challenge. During the process of charging and discharging the battery, the volume of silicon expands and shrinks, which leads to the silicon material cracking, and the SEI will crumble and regenerate over and over. This leads to loss of electrical contact and degradation of capacity, the amount of charge stored by the battery.

Understanding exactly how this process unfolds both structurally and chemically is vital for solving the problem.

The big challenge that Zhang and his team took on, published in the journal Nature Nanotechnology, was being able to observe, characterize and understand this process.

"The SEI layer is so critical for the battery,” Zhang said. “But it's very thin, invisible by any optical microscopes and is dynamically evolving during the battery cycling. It could be accessible to a transmission electron microscope which be used for very nanoscale, very thin materials. But for an SEI, this layer is pretty soft and easily destroyed on the electron beams because you must send a lot of electrons to get a high-resolution image of the material components.”

To overcome this, the researchers used cryogenic scanning transmission electron microscopy (cryo-STEM). They held the cycled electrode materials at cryogenic temperatures during preparation and imaging with a cryo-STEM microscope to minimalize sample damage from the electron beam. In addition, they integrated sensitive elemental tomography for 3D imaging, and an advanced algorithm designed to capture images at a lower electron dose. This technique enabled a 3D view of the SEI-silicon interaction, taken after various numbers of battery cycling.

"The unique aspect of our method is the cryo-STEM imaging and multiple physical process modeling,” Zhang said. "We can visualize the evolution of the silicon and SEI after the cyclic running of the battery; in parallel we can recapitulate the whole microstructural evolution process during cycling using computational simulations. That's the novelty of this research.”

The team’s work has led to better understanding of the mechanisms that cause the growth and instability of the SEI layer in a silicon anode.

“So, with the understanding of the growth mechanism of the SEI layer, that will give us a lot of insight on how to improve the performance of silicon anode or the battery design,” Zhang said. “Then we can create a more robust silicon anode for the next generation of lithium batteries.”

This next generation of lithium batteries would hold multiple benefits for both industry and the average consumer, he explained.

"Silicon is a very abundant and if we can use silicon as the anode with a long cycle life, we'll dramatically increase the capacity of a rechargeable battery,” Zhang said. “And, because silicon is abundant, that will bring down the price of batteries.”

Armed with the critical understanding of SEI layer evolution during charging and discharging in a battery with a silicon anode, Zhang said the next step will be using that knowledge to help design a silicon anode battery that does not lose capacity with cycling.

“With the understanding of the underlying mechanism, the next step is to produce some scientific hypothesis,” Zhang said. “And then we're going to test this hypothesis with silicon anodes so that we can mitigate the detrimental effect associated with the volume change of silicon. By controlling the currently uncontrollable, we can design a silicon electrode with better performance.”

The Department of Energy and the National Science Foundation funded this research.