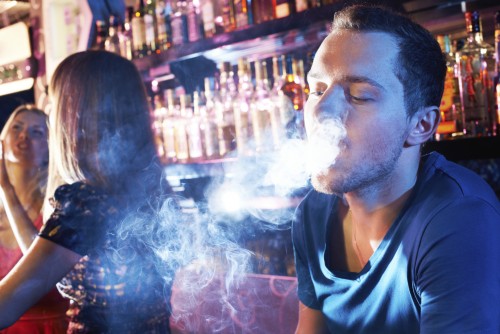 Newswise — Workers at New York City hookah bars are inhaling hazardous levels of carbon monoxide and nicotine while at work, signaling yet another breach by their employers of New York City’s anti-smoking bylaws.

This is the finding of the study, “Secondhand hookah smoke: an occupational hazard for hookah bar employees,” led by researchers at New York University’s College of Global Public Health (CGPH) and Langone Medical Center, published online January 25, 2016 in Tobacco Control.

Tested as they left their shifts, ten hookah bar employees were found to have elevated levels of toxins and identifiable markers of inflammation that are linked to airway and heart diseases. In fact, some of those tested had results akin to those seen in heavy cigarette smokers, an ironic result given that many young people see hookah pipe smoking as a “safe,” hip alternative to cigarettes.

According to the study authors, New York City now has approximately 140 hookah bars and lounges, traditionally frequented by people of Middle Eastern and Indian descent, and increasingly, by young people of all backgrounds. The practice involves smoking shisha, a fruit-flavored, often tobacco-based material using a water pipe or hookah.

“Hookah use is often exempt from clean indoor air laws that protect people from secondhand smoke,” says toxicologist and senior study author Terry Gordon, PhD, a professor in the Department of Environmental Medicine at NYU Langone and at the university’s CGPH. “Ours is the first study that links poor hookah bar air quality to damaging effects in workers, and the results recommend closer monitoring of this industry to protect the public.”

Secondhand smoke exposure is the third leading preventable cause of death in the United States, responsible for 3,000 lung cancer deaths and 35,000 heart disease deaths annually among Americans that never smoked. Beyond health consequences, the new study identified airborne nicotine in the four hookah bars surveyed even though tobacco-based shisha is banned in these venues in New York City.

The research team found that indoor air pollutant concentrations varied, but they were directly proportional to the number of people smoking and water pipes used. Many of the hookah lounges had no open windows or doors to ventilate the smoke, say the study authors.

Specifically, researchers found that the average level of exhaled carbon monoxide rose markedly after the workers’ shifts, with readings from two of the 10 workers greater than 90 parts per million, which is similar to those seen in heavy tobacco smokers. Additionally, blood levels of inflammatory signaling proteins (e.g. forms of interleukin, interferon, and tumor necrosis factor) were found to be significantly higher in workers after their shifts. Such proteins are part of normal immune responses, but also central to heart disease and cancer when present in too high levels.

“Our findings challenge the belief that secondhand exposure to hookah smoke is safe,” Gordon says. “We hope that our paper leads to larger studies of indoor air quality and regulations that protect workers and patrons.”

Funding for the study was provided by grants from the National Cancer Institute and the National Institute of Environmental Health Sciences grants (NCI 3 P30 CA016087-3351, NIEHS 5 P30 ES000260-50).

Other NYU Langone researchers important to this study were Michael Weitzman, Leili Behrooz, Grace Pan, and Ruzmyn Vilcassim. Sherry Zhou, formerly a NYU medical student, who is now at the University of Michigan School of Medicine.

About the NYU College of Global Public Health At the College of Global Public Health (CGPH) at NYU, we are preparing the next generation of public health pioneers with the critical thinking skills, acumen and entrepreneurial approaches necessary to reinvent the public health paradigm. Devoted to employing a nontraditional, inter-disciplinary model, CGPH aims to improve health worldwide through a unique blend of global public health studies, research and practice. CGPH is located in the heart of New York City and extends to NYU’s global network on six continents. Innovation is at the core of our ambitious approach, thinking and teaching. To learn more about CGPH, visit http://publichealth.nyu.edu/.About NYU Langone Medical CenterNYU Langone Medical Center, a world-class, patient-centered, integrated academic medical center, is one of the nation’s premier centers for excellence in clinical care, biomedical research, and medical education. Located in the heart of Manhattan, NYU Langone is composed of four hospitals—Tisch Hospital, its flagship acute care facility; Rusk Rehabilitation; the Hospital for Joint Diseases, the Medical Center’s dedicated inpatient orthopaedic hospital; and Hassenfeld Children’s Hospital, a comprehensive pediatric hospital supporting a full array of children’s health services across the Medical Center—plus the NYU School of Medicine, which since 1841 has trained thousands of physicians and scientists who have helped to shape the course of medical history. The Medical Center’s tri-fold mission to serve, teach, and discover is achieved 365 days a year through the seamless integration of a culture devoted to excellence in patient care, education, and research. For more information, go to www.NYULMC.org