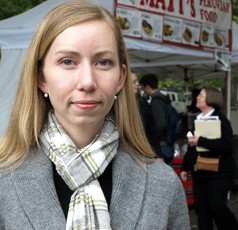 Cara Bohon, University of Oregon doctoral student in clinical psychology, is pursuing some of her research alongside Eric Stice at the Oregon Research Institute.

Newswise — Using brain imaging and chocolate milkshakes, scientists have found that women with weakened "reward circuitry" in their brains are at increased risk of weight gain over time and potential obesity. The risk increases even more for women who also have a gene associated with compromised dopamine signaling in the brain.

The results, drawn from two studies using functional magnetic resonance imaging (fMRI) at the University of Oregon's Lewis Center for Neuroimaging, appear in the Oct. 17 issue of the journal Science. The first-of-its-kind approach unveiled blunted activation in the brain's dorsal stratium when subjects were given milkshakes, which may reflect less-than-normal dopamine output.

"Although recent findings suggested that obese individuals may experience less pleasure when eating, and therefore eat more to compensate, this is the first prospective evidence for this relationship," said Eric Stice, lead author and senior researcher at the Oregon Research Institute (ORI) in Eugene. "The evidence of temporal precedence suggests it is a true vulnerability factor that predates obesity onset. In addition, the evidence that this relation is even stronger for individuals at genetic risk for compromised signaling in these brain regions points to an important biological factor that appears to increase risk for obesity onset."

Stice, who has a courtesy appointment in the UO psychology department, has studied eating disorders and obesity for 18 years. He was joined in the new research by ORI colleague Sonja T.P. Spoor, Cara Bohon, a UO doctoral student in clinical psychology, and Dana M. Small of the John B. Pierce Laboratory in New Haven, Conn., and the Yale University School of Medicine.

Dopamine is the primary neurotransmitter in the brain's reward pathways. Food intake is associated with dopamine release, while pleasure from eating correlates with the amount of dopamine release. Previous studies have suggested that obese individuals have fewer dopamine receptors in the brain and have to eat more than lean people to be satisfied.

Using fMRI, Stice's team measured the extent to which the dorsal striatum was activated in response to an individual's receipt of a taste of chocolate milkshake or a tasteless solution.

One study involved 43 female college students ranging in age from 18 to 22 with a mean body mass index (BMI) of 28.6. The second study looked at 33 adolescent girls, ages 14-18, with a mean BMI of 24.3. Most of the participants were tested for the presence of a genetic variation known as the Taq1A1 allele, which is linked to a lower number of dopamine D2 receptors.

Researchers tracked changes in BMI over a year. Results showed that participants with decreased striatal activation in response to receiving milkshake and those with the A1 allele were more likely to gain weight over time.

"I was quite excited by the study itself, as it is the first prospective study to utilize fMRI and genetic data to predict unhealthy weight gain," said Bohon, whose doctoral work is done on both the UO campus and the nearby ORI facility. "The findings suggest that certain biological factors may impact one's risk for weight gain, which is important in order to better understand how we can eventually intervene and prevent obesity."

The National Institutes of Health funded the research.

Oregon Research Institute is a non-profit, independent behavioral research center. Founded in 1960, it also has offices in Portland, Ore., and Albuquerque, N.M.