Oceans on the Precipice: Scripps Scientist Warns of Mass Extinctions and ‘Rise of Slime’ 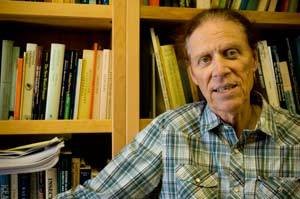 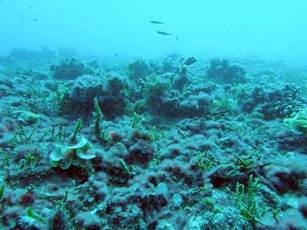 During a recent research expedition to Kiritimati, or Christmas Island, Jeremy Jackson and other researchers documented a coral reef overtaken by algae, featuring murky waters and few fish. The researchers say pollution, overfishing, warming waters or some combination of the three are to blame.

Newswise — Human activities are cumulatively driving the health of the world's oceans down a rapid spiral, and only prompt and wholesale changes will slow or perhaps ultimately reverse the catastrophic problems they are facing.

Such is the prognosis of Jeremy Jackson, a professor of oceanography at Scripps Institution of Oceanography at UC San Diego, in a bold new assessment of the oceans and their ecological health. Publishing his study in the online early edition of the Proceedings of the National Academy of Sciences (PNAS), Jackson believes that human impacts are laying the groundwork for mass extinctions in the oceans on par with vast ecological upheavals of the past.

He cites the synergistic effects of habitat destruction, overfishing, ocean warming, increased acidification and massive nutrient runoff as culprits in a grand transformation of once complex ocean ecosystems. Areas that had featured intricate marine food webs with large animals are being converted into simplistic ecosystems dominated by microbes, toxic algal blooms, jellyfish and disease.

Jackson, director of the Scripps Center for Marine Biodiversity and Conservation, has tagged the ongoing transformation as "the rise of slime." The new paper, "Ecological extinction and evolution in the brave new ocean," is a result of Jackson's presentation last December at a biodiversity and extinction colloquium convened by the National Academy of Sciences.

"The purpose of the talk and the paper is to make clear just how dire the situation is and how rapidly things are getting worse," said Jackson. "It's a lot like the issue of climate change that we had ignored for so long. If anything, the situation in the oceans could be worse because we are so close to the precipice in many ways."

In the assessment, Jackson reviews and synthesizes a range of research studies on marine ecosystem health, and in particular key studies conducted since a seminal 2001 study he led analyzing the impacts of historical overfishing. The new study includes overfishing, but expands to include threats from areas such as nutrient runoff that lead to so-called "dead zones" of low oxygen. He also incorporates increases in ocean warming and acidification resulting from greenhouse gas emissions.

Jackson describes the potently destructive effects when forces combine to degrade ocean health. For example, climate change can exacerbate stresses on the marine environment already brought by overfishing and pollution.

"All of the different kinds of data and methods of analysis point in the same direction of drastic and increasingly rapid degradation of marine ecosystems," Jackson writes in the paper.

Jackson furthers his analysis by constructing a chart of marine ecosystems and their "endangered" status. Coral reefs, Jackson's primary area of research, are "critically endangered" and among the most threatened ecosystems; also critically endangered are estuaries and coastal seas, threatened by overfishing and runoff; continental shelves are "endangered" due to, among other things, losses of fishes and sharks; and the open ocean ecosystem is listed as "threatened" mainly through losses at the hands of overfishing.

"Just as we say that leatherback turtles are critically endangered, I looked at entire ecosystems as if they were a species," said Jackson. "The reality is that if we want to have coral reefs in the future, we're going to have to behave that way and recognize the magnitude of the response that's necessary to achieve it."

To stop the degradation of the oceans, Jackson identifies overexploitation, pollution and climate change as the three main "drivers" that must be addressed.

"The challenges of bringing these threats under control are enormously complex and will require fundamental changes in fisheries, agricultural practices and the ways we obtain energy for everything we do," he writes.

"So it's not a happy picture and the only way to deal with it is in segments; the only way to keep one's sanity and try to achieve real success is to carve out sectors of the problem that can be addressed in effective terms and get on it as quickly as possible."

The research described in the paper was supported by the William E. and Mary B. Ritter Chair of Scripps Institution of Oceanography.