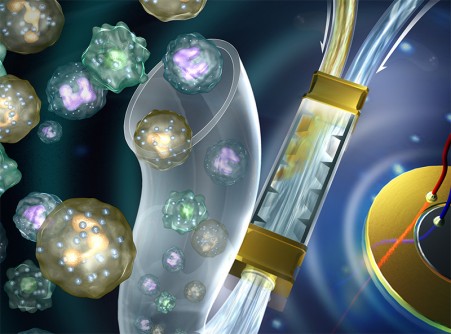 An artist conception of an accoustofluidic sputum liquefaction device is the cover image for the journal Lab on a Chip. Photo credit: Huang/Penn State

A device to mix liquids utilizing ultrasonics is the first and most difficult component in a miniaturized system for low-cost analysis of sputum from patients with pulmonary diseases such as tuberculosis and asthma. The device, developed by engineers at Penn State in collaboration with researchers at the National Heart, Lung, and Blood Institute (NHLBI), part of the National Institutes of Health, and the Washington University School of Medicine, will benefit patients in the U.S., where 12 percent of the population, or around 19 million people, have asthma, and in undeveloped regions where TB is still a widespread and often deadly contagion.

“To develop more accurate diagnosis and treatment approaches for patients with pulmonary diseases, we have to analyze sample cells directly from the lungs rather than by drawing blood,” said Tony Jun Huang, professor of engineering science and mechanics at Penn State and the inventor, with his group, of this and other acoustofluidic devices based on ultrasonic waves. “For instance, different drugs are used to treat different types of asthma patients. If you know what a person’s immunophenotype is, you can provide personalized medicine for their particular disease.”

There are several issues with the current standard method for sputum analysis. The first is that human specimens can be contagious, and sputum analysis requires handling of specimens in several discrete machines. With a lab on a chip device, all biospecimens are safely contained in a single disposable component.

Another issue is the sample size required for analysis in the current system, which is often larger than a person can easily produce. The acoustofluidic sputum liquefier created by Huang’s group requires 100 times less sample while still providing accuracy equivalent to the standard system.

A further issue is that current systems are difficult to use and require trained operators. With the lab on a chip system, a nurse can operate the device with a touch of a few buttons and get a read out, or the patient could even operate the device at home. In addition, the disposable portion of the device should cost less than a dollar to manufacture.

Po-Hsun Huang, a graduate student in the Huang group and the first author on the recent paper describing the device in the Royal Society of Chemistry journal Lab on a Chip, said “This will offer quick analysis of samples without having to send them out to a centralized lab. While I have been working on the liquefaction component of the device, my lab mates are working on the flow cytometry analysis component, which should be ready soon. This is the first on-chip sputum liquefier anyone has developed.”

Stewart J. Levine, a Senior Investigator and Chief of the Laboratory of Asthma and Lung Inflammation in the Division of Intramural Research at NHLBI, said “This on-chip sputum liquefier is a significant advance regarding our goal of developing a point-of-care diagnostic device that will determine the type of inflammation present in the lungs of asthmatics. This will allow health care providers to individualize asthma treatments for each patient and advance the goal of bringing precision medicine into clinical practice.”

This research was supported by the American Asthma Foundation Scholar Award, the National Science Foundation, and the NHLBI Division of Intramural Research. Portions of this work were carried out in the Penn State Nanofabrication Facility, a node of the NSF-funded National Nanotechnology Infrastructure Network.