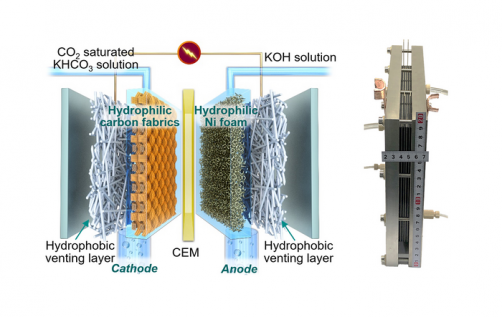 Credit: Dr. Zhongwei Chen, a chemical engineering professor at the University of Waterloo

Left: a schematic showing the key components of the reactor and working mechanism. Right: a picture of the CO2 stack, which is a demonstration of the commercial reactors.

Newswise — New technology developed at the University of Waterloo could make a significant difference in the fight against climate change by affordably converting harmful carbon dioxide (CO2) into fuels and other valuable chemicals on an industrial scale.

Outlined in a study published today in the journal Nature Energy, the system yields 10 times more carbon monoxide (CO) – which can be used to make ethanol, methane and other desirable substances – than existing, small-scale technologies now limited to testing in laboratories.

Its individual cells can also be stacked to form reactors of any size, making the technology a customizable, economically viable solution that could be installed right on site, for example, at factories with CO2 emissions.

“This is a critical bridge to connect CO2 lab technology to industrial applications,” said Dr. Zhongwei Chen, a chemical engineering professor at Waterloo. “Without it, it is very difficult for materials-based technologies to be used commercially because they are just too expensive.”

Electrolyzers developed by the researchers have new electrodes and a new kind of liquid-based electrolyte, which is saturated with CO2 and flowed through the devices for conversion into CO via an electrochemical reaction.

Their electrolyzers are essentially 10-centimetre by 10-centimetre cells, many times larger than existing devices, that can be stacked and configured in reactors of any size.

“This is a completely new model for a CO2 reactor,” said Chen, the Canada Research Chair in Advanced Materials for Clean Energy. “It makes the whole process economically viable for industrialization and can be customized to meet specific requirements.”

The researchers envision on-site reactors at coal-fired power plants and factories, perhaps the size of a house or more, that would be directly fed CO2 emissions, further reducing costs by eliminating the need to capture and collect CO2 first.

They are also developing plans to power the reactors with on-site renewable energy sources such as solar panels, contributing to the environmental benefits.

“I’m excited by the potential of this technology,” Chen said. “If we really want to make a difference by reducing emissions, we have to concentrate on reducing costs to make it affordable.”