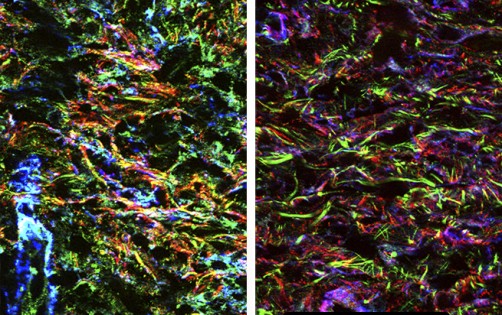 Compared with a control skin wound (left), the ECM within a wound containing increased numbers of myofibroblasts (right) is more consistently organized into linear fibers, which increases the activation and release of a growth factor that promotes fibrosis.

Newswise — The excessive activity of repair cells in the early stages of tissue recovery sets the stage for fibrosis by priming the activation of an important growth factor, according to a study in The Journal of Cell Biology.

Myofibroblasts are highly contractile cells that repair damaged tissues by replacing and reorganizing the extracellular matrix (ECM), the meshwork that fills the space around cells, in order to draw a wound closed. When myofibroblasts are not properly regulated, however, they continue to act on healed tissues and produce excessive amounts of ECM. Excessive ECM production is involved in conditions such as fibrosis, the development of damaging scar tissue in organs.

Transforming growth factor β1 (TGF-β1) is a key signaling molecule within the ECM that promotes tissue fibrosis. Boris Hinz and colleagues previously found that myofibroblasts pull on inactive TGF-β1 complexes to release the active form of the signaling molecule from the ECM. The University of Toronto researchers then wanted to find out whether the structural changes that myofibroblasts make in the ECM during wound healing might also make it easier for the ECM to release activated growth factor later in the process.

The researchers found that wounds containing increased numbers of myofibroblasts exhibited much higher levels of ECM organization, with components arranged into long, thin fibers. Hinz and colleagues then devised a series of experiments to test how this highly organized ECM configuration affects TGF- β1 activation. They found that higher levels of organization and tension in the ECM always resulted in high amounts of activated TGF- β1 being released by the contractile force of myofibroblasts.

Their results indicate that, over time, as myofibroblasts remodel and stiffen the ECM during wound healing, the matrix becomes a loaded “mechanical spring” that puts strain on TGF- β1 complexes, causing them to be easily pulled apart and activated by contracting myofibroblasts. Because TGF- β1 induces further myofibroblast activity and, ultimately, tissue fibrosis, limiting ECM reorganization during wound healing might therefore be an effective therapeutic approach to prevent fibrosis. # # #

Research reported in the press release was supported by the Canadian Institutes of Health Research, the Col-laborative Health Research Program, the Canada Foundation for Innovation and Ontario Research Fund, the Heart and Stroke Foundation Ontario, the European Union’s Seventh Framework Program.