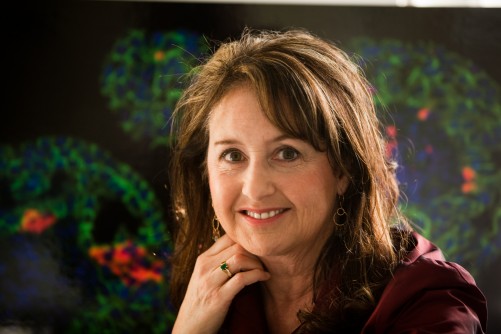 Dr. Itkin-Ansari is an adjunct professor at Sanford-Burnham

Newswise — La Jolla, Calif., April 20, 2015 (embargoed until 12:00 P.M. EST) – A new research study has shown that pancreatic cancer cells can be coaxed to revert back toward normal cells by introducing a protein called E47. E47 binds to specific DNA sequences and controls genes involved in growth and differentiation. The research provides hope for a new treatment approach for the more than 40,000 people who die from the disease each year in the United States.

“For the first time, we have shown that overexpression of a single gene can reduce the tumor-promoting potential of pancreatic adenocarcinoma cells and reprogram them toward their original cell type. Thus, pancreatic cancer cells retain a genetic memory which we hope to exploit,” said Pamela Itkin-Ansari, Ph.D., adjunct professor in the Development, Aging, and Regeneration Program at Sanford-Burnham and lead author of the study published today in the journal Pancreas.

E47 turns the clock back The study, a collaborative effort between Sanford-Burnham, UC San Diego, where Itkin-Ansari holds a joint appointment, and Purdue University, generated human pancreatic ductal adenocarcinoma cell lines to make higher than normal levels of E47. The increased amount of E47 caused cells to stall in the G0/G1 growth phase, and differentiate back toward an acinar cell phenotype.

In vivo studies showed that when the reprogrammed cancer cells were introduced into mice, their ability to form tumors was greatly diminished compared to untreated adenocarcinoma cells.

“Presently, pancreatic adenocarcinoma is treated with cytotoxic agents, yet the average survival for patients post-diagnosis is merely six months, and the improvements in therapies are measured in days,” said Andrew M. Lowy, M.D., professor of surgery at the UC San Diego Moores Cancer Center and co-chair of the National Cancer Institute’s Pancreatic Cancer Task Force. “The finding that we can differentiate these cancer cells back to a non-threatening phenotype is encouraging. Indeed, there is a precedent for cell differentiation therapy in that the approach has been used to treat acute promyelocytic leukemia (APL) and some neuroblastomas successfully.”

“Our next step is to test primary patient-derived tumor tissue to determine whether E47 can produce similar results, potentially providing a novel therapeutic approach to combat this highly lethal disease,” said Itkin-Ansari. “Additionally, we are screening for molecules—potential drugs—that can induce overexpression of E47.”

Pancreatic adenocarcinoma Pancreatic adenocarcinoma is the most common form of pancreatic cancer. It’s primarily caused by a mutation in the oncogene called Kras that causes the digestive enzyme-secreting cells (acinar cells) to differentiate into a destabilized duct-like cell type, which is cancerous. The disease is often called a “silent” cancer because it rarely shows early symptoms—it tends to be diagnosed at advanced stages when it causes weight loss, abdominal pain, and jaundice.

ABOUT SANFORD-BURNHAM MEDICAL RESEARCH INSTITUTESanford-Burnham Medical Research Institute is dedicated to discovering the fundamental molecular causes of disease and devising the innovative therapies of tomorrow. Sanford-Burnham takes a collaborative approach to medical research with major programs in cancer, neurodegeneration and stem cells, diabetes, and infectious, inflammatory, and childhood diseases. The Institute is recognized for its National Cancer Institute-designated Cancer Center, its NIH-designated Neuroscience Center Cores, and expertise in drug discovery technologies. Sanford-Burnham is a nonprofit, independent institute that employs more than 1,000 scientists and staff in San Diego (La Jolla), Calif., and Orlando (Lake Nona), Fla. For more information, visit us at sanfordburnham.org.