"I can pretty much do everything now," patient says 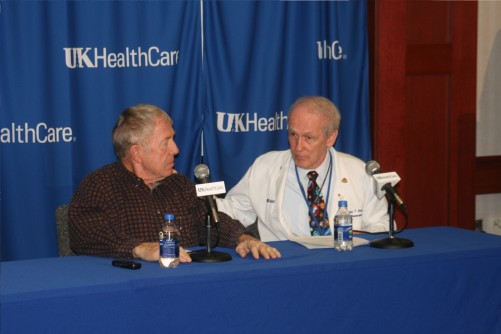 Parkinson's disease patient Marion Cox, pictured at left with his doctor, John Slevin, MD of the Kentucky Neuroscience Institute, explains how his life has changed following his participation in a clinical trial for a new drug delivery system. "What can I do now that I couldn't do before?," he asks. "How about everything?"

Newswise — LEXINGTON, Ky. (Apr. 21, 2015) -- To date, a cure for Parkinson's disease remains elusive for the more than 50,000 Americans diagnosed yearly, despite decades of intensive study. But a newly approved treatment that might help ease the symptoms of Parkinson's has shown remarkable promise. John Slevin, MD, MBA, Professor of Neurology and Vice Chair of Research at UK's Kentucky Neuroscience Institute, worked with a team of international investigators to explore the efficacy of continuous levodopa dosing using a specially developed gel called CLES (Duopa®) that is delivered directly into the small intestine by a portable infusion pump.

"We were extremely pleased with the results," Dr. Slevin said. “Patients with advanced PD treated via this new method demonstrated marked improvement in symptom fluctuations with reduced dyskinesia.“

According to Dr. Slevin, CLES's effectiveness is due in part to the fact that it results in more stable plasma concentrations of levodopa by delivering it directly to the small intestine, which bypasses issues of erratic gastric emptying and absorption caused by reduced muscular function inherent to PD.

"CLES has the potential to address a significant unmet need in this patient population with limited therapeutic options," Dr. Slevin added.

Marion Cox knows this all too well. This 70-year old Georgetown farmer and former real estate developer has suffered from Parkinson's for 16 years.

"I could tell I was going the wrong way," Cox says as he described his decline in spite of frequent medication adjustments. Even with his medications, he began to "stagger around" and struggled to speak and swallow. He was frustrated that he couldn't spend more quality time with his two daughters and two granddaughters. So when Dr. Slevin mentioned the Duopa clinical trial, Marion leapt at the chance.

"I felt different right away," he says of his experience in the 3-year trial. Cox shares that he can get around better, get dressed more easily, be gone all day farming his 800 acres.

"I'm getting more done. I'm not as good as I once was [before I had Parkinson's] but I'm pretty darn well off," he adds.

Parkinson’s is a progressive disease caused by the death of dopamine-producing cells in the brain. While most people recognize a Parkinson's patient by their motor skill difficulties such as tremor, slowness and stiffness, the disease also gives rise to several non-motor types of symptoms such as sensory deficits, cognitive difficulties or sleep problems.

While doctors have a number of treatments available to help manage the symptoms of Parkinson's disease, the motor deficits that are the hallmarks of PD are also the nemesis of effective treatment, since the muscles that control digestion are also affected, making dosing -- both in terms of amount and timing -- challenging.

Compounding this challenge is the fact that medications lose effectiveness over time as cell death progresses. Although levodopa remains the “gold standard” to control motor deficits in the treatment of early stage PD, after four to six years of treatment with oral medications for Parkinson’s disease, about 40% of patients find those medications less effective overall, inconsistent in controlling muscle function, and accompanied by a bothersome side-effect called dyskinesia, or involuntary muscle movement. By nine years of treatment, about 90% will suffer these effects.

The FDA approved CLES in January 2015. Because the safety and efficacy of levodopa is already established, this treatment has the potential to be fast-tracked for widespread use within the next 4-6 months.

Results from the study were published in the current issue of the Journal of Parkinson’s Disease. The article is available at http://iospress.metapress.com/content/04427r3701341251/fulltext.pdf.

The archived press conference can be viewed at: Www.youtube.com/watch?v=kpPlrzcEyCo