22-Mar-2017 11:05 AM EDT, by Perelman School of Medicine at the University of Pennsylvania contact patient services
favorite_border 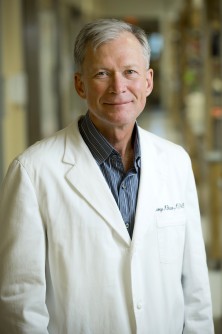 Newswise — PHILADELPHIA— Building on earlier work in designing chimeric human-simian immunodeficiency viruses (SHIVs) that serve as a model of HIV infection of humans, George M. Shaw, MD, PhD, a professor of Hematology/Oncology and Microbiology in the Perelman School of Medicine at the University of Pennsylvania, has received $16.3 million over five years from the National Institute of Allergy and Infectious Diseases (NIAID) to develop a long-sought-after HIV vaccine. The research is premised on the human body’s capacity, in rare individuals, to produce broadly neutralizing antibodies against HIV in the course of natural infection, and the hypothesis that SHIV infection of monkeys could do the same.

Despite decades of research, there are still no HIV vaccines for humans that can induce the body to make the broadly neutralizing antibodies viewed as capable of conferring protective immunity against the virus. Antibodies defend cells by blocking the invasion of foreign pathogens. Similarly to other vaccines, an HIV vaccine would introduce non-infectious components or a weakened form of the microbe to a person’s immune cells, readying them for a possible future attack against a microbe they have already been exposed to.

A major reason for the elusiveness of an HIV vaccine -- despite a number of promising candidates -- is the virus’s ability to rapidly mutate or otherwise conceal its outer coat proteins, known as the envelope. The envelope fuses with the host cell, allowing viral genes to enter the host cell and replicate, eventually leading to cell death. Another problem is that the envelope is coated with sugars derived from the body, which a person’s immune system does not recognize as foreign and hence won’t readily attack. But envelopes can elicit, albeit in the case of HIV only after several years of infection and only in a subset of people, the antibodies that could ultimately lead to their very demise. It is this capacity that serves as a foundation in the search for an HIV vaccine.

In an effort to overcome these envelope-based obstacles, the NIAID grant will allow the researchers, for the first time, to model the development of broadly neutralizing antibodies in SHIV-infected rhesus macaque monkeys. The investigators expect such antibodies to occur more commonly in the monkeys than they do in human HIV infection and at an accelerated pace. The basis for this speculation is preliminary data by the Penn team that showed that HIV envelopes that in humans elicited broadly neutralizing antibodies did the same in monkeys. If these findings are generalized in the newly funded work, it should be possible using molecular cloning approaches to isolate unique combinations of rhesus and human antibody precursors and HIV envelopes that bind them with high affinity. And this could serve as a basis of a new HIV vaccine development strategy.

In the proposed new work, Shaw and his team will seek to induce broadly neutralizing antibodies in rhesus monkeys via laboratory-created simian-human immunodeficiency viruses. SHIVs, which contain HIV envelopes from humans that elicited broadly neutralizing antibodies or were found to bind to precursors of these antibodies, will be used to infect monkeys. Then, the maturation or evolution of these antibody precursors will be characterized genetically along with sequences of the HIV envelope as they co-evolve throughout infection. Such a strategy, the investigators believe, will allow them to decipher the critical molecular events responsible for eliciting broadly neutralizing antibodies. This, in turn, can serve as a “molecular guide” for designing vaccine immunogens that reproduce the antibody eliciting behavior of SHIV or HIV infections.

The new funding comes in the wake of a study from the Shaw lab published in the Proceedings of the National Academy of Sciences last year that may become a signal event in the HIV/AIDS vaccine effort. It addressed a major problem with SHIVs: the only HIV envelopes that would allow SHIVs to infect rhesus monkeys were artificially adapted to bind to the rhesus CD4 molecule, the primary receptor for the virus. Unfortunately, as a side-effect, the SHIV envelopes lost their natural defenses to antibodies, effectively erasing their potential value for HIV vaccine research. To surmount this problem, the Shaw team found that changing a single amino acid in what is called the “CD4 binding pocket”—out of about 850 that comprise the viral envelope—led to a much greater ability of SHIVs to infect rhesus monkeys, while at the same time retaining the basic features of the normal HIV envelope and its interaction with the human immune system.

Building on these findings, the Shaw team will test a large panel of novel SHIVs that each carry an envelope known to bind broadly neutralizing antibodies. SHIVs will be down-selected to a manageable number based on their ability to elicit strong antibody responses, which in turn will be assessed for breadth of reactivity against hundreds of different HIV strains that circulate globally. Those SHIVs that elicit the most potent and broadly reactive antibodies will then be subjected to intensive analysis in larger numbers of animals where patterns of antibody–envelope coevolution will be assessed.

Finally, recombinant-DNA-generated protein immunogens that mimic the structure and antigenicity of envelopes from immunogenic SHIVs will be tested for their ability to elicit broadly neutralizing antibodies in rhesus macaques. If successful in the monkeys, analogous immunogens could be advanced to human trials.

Other members of the team are Hui Li and Beatrice Hahn from Penn; Barton Haynes and Garnett Kelsoe from Duke University; Steve Harrison from Harvard University; and Bette Korber from the Los Alamos National Laboratories.