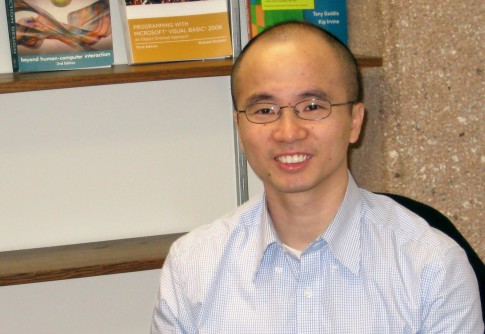 Wichita State University professor David Xu said people are less likely to lie via video chat than when in person.

Newswise — Sending a text message leads people to lie more often than in other forms of communication, according to new research by David Xu, assistant professor in the W. Frank Barton School of Business at Wichita State University.

Xu is lead author of the paper, which compares the level of deceit people will use in a variety of media, from text messages to face-to-face interactions.

The study will appear in the March edition of the Journal of Business Ethics. The other co-authors are professor Karl Aquino and associate professor Ronald Cenfetelli with the Sauder School of Business at the University of British Columbia.

How the study worked

The study involved 170 students from the Sauder School performing mock stock transactions in one of four ways: face-to-face, or by video, audio or text chatting.

Researchers promised cash awards of up to $50 to increase participants' involvement in the role play. "Brokers" were promised increased cash rewards for more stock sales, while "buyers" were told their cash reward would depend on the yet-to-be-determined value of the stock.

The brokers were given inside knowledge that the stock was rigged to lose half of its value. Buyers were only informed of this fact after the mock sales transaction and were asked to report whether the brokers had employed deceit to sell their stock.

The fact that people were less likely to lie via video than in person was surprising, Xu said, but makes sense given the so-called "spotlight" effect, where a person feels they're being watched more closely on video than face-to-face.

Xu said this kind of research has implications for consumers to avoid problems such as online fraud, and for businesses looking to promote trust and build a good image, Xu said.

Audio comments are available at http://www.wichita.edu/newsline.# # # # #