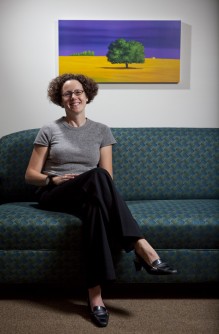 Meredith Coles is a professor of psychology at Binghamton University, State University of New York.

“We’re really interested in how this kind of unusual timing of sleep might affect cognitive functioning,” said Schubert. “One possibility is impulse control. It might be that something about shifting the timing of your sleep might reduce your ability to control your thoughts and your behaviors, so it might make it more likely that you’re going to have a hard time dismissing intrusive thoughts characteristic of obsessions, and it might make it more difficult for you to refrain from compulsive behaviors that are designed to reduce the anxiety caused by obsessive thoughts.”

“I always knew you were supposed to get eight hours of sleep, but I was never told it matters when you do it,” said Coles. “It’s been striking to me that this difference seems to be very specific to the circadian component of when you sleep. That we find that there are specific negative consequences of sleeping at the wrong times, that’s something to educate the public about.”

The researchers are interested in exploring this phenomenon further. Coles plans on collecting pilot data using lightboxes to shift people’s bedtimes. “It’s one of our first efforts to actually shift their bedtimes and see if it reduces their OCD symptoms, and if this improves their ability to resist those intrusive thoughts and not develop compulsions in response to them.”

The paper, “Later bedtime is associated with decrements in perceived control of obsessions and compulsions,” was presented at the 31st Annual Meeting of the Associated Professional Sleep Societies.