How people interpret musical notes depends on the types of music they have listened to, researchers find 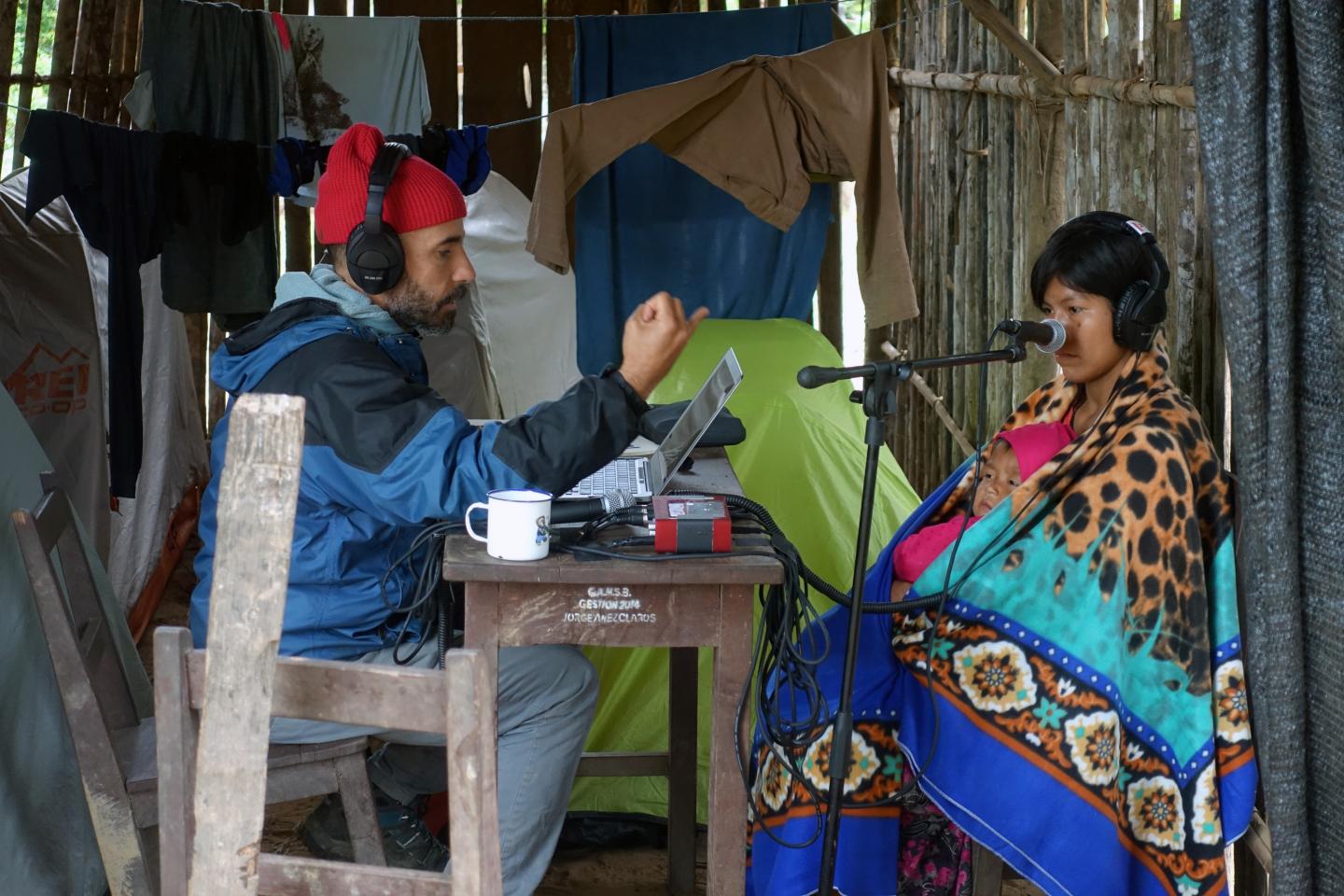 Eduardo Undurraga, an assistant professor at the Pontifical Catholic University of Chile, runs a musical pitch perception experiment with a member of the Tsimane' tribe of the Bolivian rainforest. 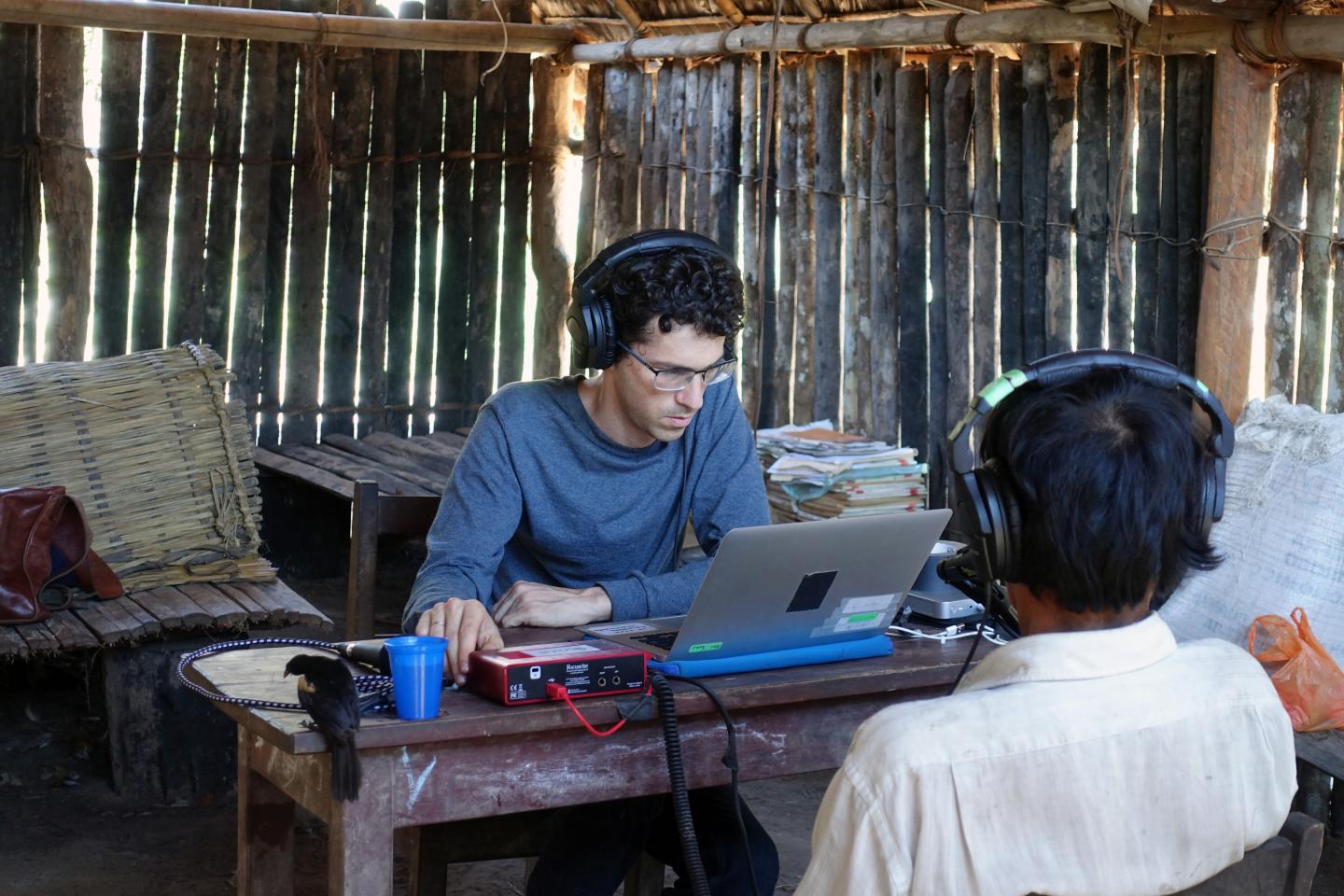 Nori Jacoby, a former MIT postdoc now at the Max Planck Institute for Empirical Aesthetics, runs an experiment with a member of the Tsimane' tribe, who have had little exposure to Western music.

Newswise — CAMBRIDGE, MA -- People who are accustomed to listening to Western music, which is based on a system of notes organized in octaves, can usually perceive the similarity between notes that are same but played in different registers -- say, high C and middle C. However, a longstanding question is whether this a universal phenomenon or one that has been ingrained by musical exposure.

This question has been hard to answer, in part because of the difficulty in finding people who have not been exposed to Western music. Now, a new study led by researchers from MIT and the Max Planck Institute for Empirical Aesthetics has found that unlike residents of the United States, people living in a remote area of the Bolivian rainforest usually do not perceive the similarities between two versions of the same note played at different registers (high or low).

The findings suggest that although there is a natural mathematical relationship between the frequencies of every "C," no matter what octave it's played in, the brain only becomes attuned to those similarities after hearing music based on octaves, says Josh McDermott, an associate professor in MIT's Department of Brain and Cognitive Sciences.

"It may well be that there is a biological predisposition to favor octave relationships, but it doesn't seem to be realized unless you are exposed to music in an octave-based system," says McDermott, who is also a member of MIT's McGovern Institute for Brain Research and Center for Brains, Minds and Machines.

The study also found that members of the Bolivian tribe, known as the Tsimane', and Westerners do have a very similar upper limit on the frequency of notes that they can accurately distinguish, suggesting that that aspect of pitch perception may be independent of musical experience and biologically determined.

Cross-cultural studies of how music is perceived can shed light on the interplay between biological constraints and cultural influences that shape human perception. McDermott's lab has performed several such studies with the participation of Tsimane' tribe members, who live in relative isolation from Western culture and have had little exposure to Western music.

In a study published in 2016, McDermott and his colleagues found that Westerners and Tsimane' had different aesthetic reactions to chords, or combinations of notes. To Western ears, the combination of C and F# is very grating, but Tsimane' listeners rated this chord just as likeable as other chords that Westerners would interpret as more pleasant, such as C and G.

Later, Jacoby and McDermott found that both Westerners and Tsimane' are drawn to musical rhythms composed of simple integer ratios, but the ratios they favor are different, based on which rhythms are more common in the music they listen to.

In their new study, the researchers studied pitch perception using an experimental design in which they play a very simple tune, only two or three notes, and then ask the listener to sing it back. The notes that were played could come from any octave within the range of human hearing, but listeners sang their responses within their vocal range, usually restricted to a single octave.

Western listeners, especially those who were trained musicians, tended to reproduce the tune an exact number of octaves above or below what they heard, though they were not specifically instructed to do so. In Western music, the pitch of the same note doubles with each ascending octave, so tones with frequencies of 27.5 hertz, 55 hertz, 110 hertz, 220 hertz, and so on, are all heard as the note A.

Western listeners in the study, all of whom lived in New York or Boston, accurately reproduced sequences such as A-C-A, but in a different register, as though they hear the similarity of notes separated by octaves. However, the Tsimane' did not.

"The relative pitch was preserved (between notes in the series), but the absolute pitch produced by the Tsimane' didn't have any relationship to the absolute pitch of the stimulus," Jacoby says. "That's consistent with the idea that perceptual similarity is something that we acquire from exposure to Western music, where the octave is structurally very important."

The study findings also shed light on the upper limits of pitch perception for humans. It has been known for a long time that Western listeners cannot accurately distinguish pitches above about 4,000 hertz, although they can still hear frequencies up to nearly 20,000 hertz. In a traditional 88-key piano, the highest note is about 4,100 hertz.

People have speculated that the piano was designed to go only that high because of a fundamental limit on pitch perception, but McDermott thought it could be possible that the opposite was true: That is, the limit was culturally influenced by the fact that few musical instruments produce frequencies higher than 4,000 hertz.

The researchers found that although Tsimane' musical instruments usually have upper limits much lower than 4,000 hertz, Tsimane' listeners could distinguish pitches very well up to about 4,000 hertz, as evidenced by accurate sung reproductions of those pitch intervals. Above that threshold, their perceptions broke down, very similarly to Western listeners.

"It looks almost exactly the same across groups, so we have some evidence for biological constraints on the limits of pitch," Jacoby says.

One possible explanation for this limit is that once frequencies reach about 4,000 hertz, the firing rates of the neurons of our inner ear can't keep up and we lose a critical cue with which to distinguish different frequencies.

Jacoby and McDermott now hope to expand their cross-cultural studies to other groups who have had little exposure to Western music, and to perform more detailed studies of pitch perception among the Tsimane'.

Such studies have already shown the value of including research participants other than the Western-educated, relatively wealthy college undergraduates who are the subjects of most academic studies on perception, McDermott says. These broader studies allow researchers to tease out different elements of perception that cannot be seen when examining only a single, homogenous group.

"We're finding that there are some cross-cultural similarities, but there also seems to be really striking variation in things that a lot of people would have presumed would be common across cultures and listeners," McDermott says. "These differences in experience can lead to dissociations of different aspects of perception, giving you clues to what the parts of the perceptual system are."

The research was funded by the James S. McDonnell Foundation, the National Institutes of Health, and the Presidential Scholar in Society and Neuroscience Program at Columbia University.

Caption: Eduardo Undurraga, an assistant professor at the Pontifical Catholic University of Chile, runs a musical pitch perception experiment with a member of the Tsimane' tribe of the Bolivian rainforest.

Caption: Nori Jacoby, a former MIT postdoc now at the Max Planck Institute for Empirical Aesthetics, runs an experiment with a member of the Tsimane' tribe, who have had little exposure to Western music.