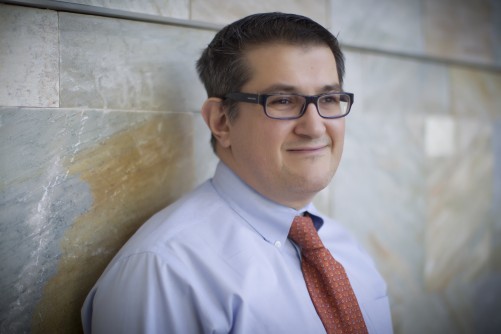 Newswise — CHAPEL HILL – An investigational compound designed to block a hyperactive cell growth signal in advanced melanoma and other cancers has shown some promise in an early-stage clinical trial, researchers at the University of North Carolina Lineberger Comprehensive Cancer Center and other institutions have reported.

In JCI Insight, UNC Lineberger’s Stergios Moschos, MD, and colleagues published the results of a phase I, multi-institution clinical trial for an investigational treatment for melanoma and other cancers with mutations in the BRAF or RAS genes. The study involved 26 patients and investigated the novel compound MK-8353, which is designed to block a signal called ERK that has been shown to help drive cancer cell growth in resistant melanoma and other diseases.

While targeted treatments have been approved for melanoma and lung cancers with a specific mutation in the BRAF gene – which causes a cascade of cell growth signals to become hyperactive – the majority of patients develop resistance to these treatments, and their cancer comes back. To combat resistance, researchers at UNC Lineberger and other institutions investigated the MK-8353 compound to try to block downstream signals that help drive resistance, such as ERK, as opposed to the early signals that initially trigger the hyperactive growth.

In this new study, three of the 15 patients who had results that could be evaluated experienced partial responses to the investigational treatment.

The researchers noted that although their study included a small number of patients, this response rate was similar to rates seen in studies for other treatments, such as MEK inhibitors. Moschos said the lower response rates mean scientists should consider using the compound in combination with other treatments.

“The response rate that we saw for ERK inhibitors is reminiscent of the response seen with MEK inhibitors,” said Moschos, who is an associate professor in the UNC School of Medicine. “We think, therefore, that ERK inhibitors cannot be given as single agents, just like MEK inhibitors. The question is: Which combination is best?”

In addition to investigating the compound’s anti-tumor effects, the study’s other purpose was to determine the dose level that study participants could be given safely without causing serious side effects. They found that patients could tolerate the treatment up to 400 milligrams twice daily. Moschos said that due to the toxicities of the treatment, future studies should consider different dosing schedules, such as using the compound once per day, or twice per day, every few days.

“This alternative approach may balance higher, though more temporal, suppression of pERK at the tumor tissue in favor of sparing sustained suppression of ERK signaling in normal tissues,” the researchers reported.

The trial is part of a larger ongoing research effort by UNC Lineberger to investigate whether ERK inhibitors can have a role in treating cancers.

“ERK certainly stimulates factors that promote cancer growth,” Der said. “ERK is very complex, and it’s still surprisingly poorly understood, but what is very clear is that it is required for cancer growth, and that’s why there are a number of inhibitors in this pathway that are either approved, or under clinical evaluation. Clearly, drug companies for good reason have decided that this is an important pathway, let’s make inhibitors against it.”

The study was supported by the Merck Sharp & Dohme Corp., a subsidiary of Merck & Co Inc., and the National Institutes of Health.