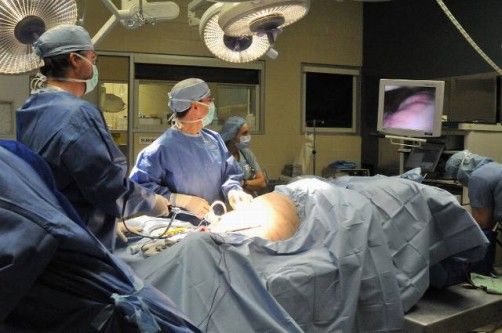 Newswise — “Taja,” a two-year-old white Bengal tiger, is back to her old self, bounding around her enclosure, and recovering well following a minimally invasive spaying procedure at the Cummings School of Veterinary Medicine at Tufts University. The 180-lb white tiger, a resident of Southwick’s Zoo in Mendon, Mass., was the second of two tigers to have the routine procedure done laparoscopically at the Cummings School’s Foster Hospital for Small Animals.

The Cummings School’s surgical team, led by Clinical Associate Professors Robert McCarthy and Joerg Mayer and third-year surgical resident Jennifer Weh, performed the procedure in just over one hour. Taja is expected to make a better-than-typical recovery, thanks to the fact that each of the two small holes in her abdomen required only one suture—eliminating the need to anesthetize the animal again to remove sutures once the wound heals.

“Anyone who’s ever had laparoscopy is very aware of how little pain they experienced following the procedure, and this less-invasive method is a wonderful way to decrease pain for animals following the surgery,” said Robert McCarthy, MS, DVM, DACVS.

Pictures of the surgery can be found at: http://www.tufts.edu/vet/mediaservices/gallery/Taj/taja.htm A video detailing the procedure, featuring interviews with surgeon Robert McCarthy, anesthesiologist Lois Wetmore, and Peter Brewer of Southwick’s Zoo, is available at http://www.youtube.com/watch?v=AF03_Hp6pdQ. High-resolution photos and videos are available by request.

The Cummings School recently began performing spays laparoscopically, which reduces postoperative pain, collateral tissue damage, and has been shown in clinical literature to reduce complications. Unlike the open surgical approach to spays, this procedure involved only removal of the animal’s ovaries, not the uterus, as well. Clinicians at the Foster Hospital have recently begun offering the minimally invasive procedure to large dogs at the hospital.

Tigers, which are listed as endangered by the International Union for Conservation of Nature, are primarily found in India and Bangladesh, although they have been found in Nepal, Bhutan, Myanmar, and southern Tibet. About 4,000 tigers remain in the wild, according to WWF. White tigers are produced through extensive inbreeding and, as such, zoo industry groups do not recommend they be bred.

Named for the late Dr. Henry Foster L. Foster and his wife, Lois, the Foster Hospital for Small Animals treated more than 26,000 animals in Fiscal Year 2009 (July 1, 2008-June 30, 2009), and ranks in the top five veterinary teaching hospitals in the nation. More than 80 percent of the hospital’s cases are dogs and cats, but Cummings School clinicians have recently treated a goose with osteosarcoma, a mule with an irregular heartbeat, and a baby giraffe deprived of her mother’s milk.