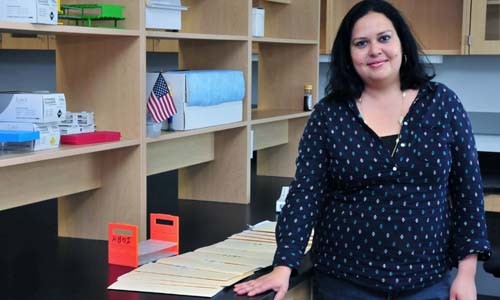 Liliana Cano has joined the faculty of the UF/IFAS Indian River Research and Education Center in Fort Pierce, Florida. There, she will help the citrus industry.

Newswise — FORT PIERCE, Fla. – A plant pathologist with 12 years of experience in plant-microbe interactions has joined the faculty of the University of Florida Institute of Food and Agricultural Sciences’ Indian River Research and Education Center to help citrus growers.

Following an international search for a scientist to join a team of UF researchers in their efforts to restore Florida’s citrus production region, Liliana Cano has been named assistant professor of plant pathology at IRREC, near Fort Pierce, Florida.

IRREC is one of 12 research stations around Florida that serve the state’s important agricultural production regions. Research faculty at the Fort Pierce location work with citrus horticulture, soil and water science, entomology, aquaculture and post-harvest technology.

Cano’s appointment, which started on Feb. 26, will involve genome analyses of the most important pathogens affecting citrus in Florida toward the identification of key molecules secreted by these microbes and the elucidation of the mechanisms used by these pathogens to cause disease in citrus.

“I welcome inquiries by local growers and industry representatives as to how my research may best serve their interests,” said Cano.

According to Stoffella, the UF/IFAS goal is to develop management strategies for citrus production, an economically important specialty crop. Grapefruit produced in the Indian River region is celebrated as the world’s premier fresh fruit product. But in recent years the state’s citrus industry has declined as a result of a disease called huanglongbing (HLB), also known as citrus greening.

An accomplished scientist, Cano’s work has been recognized with a number of honors including the 2011 Excellence in Science Communication Student Prize from the John Innes Center Foundation for having co-authored 12 publications during collaborations while completing her doctorate at The Sainsbury Lab in the United Kingdom; The Daiwa Adrian Prize in 2010, awarded by both Japanese and United Kingdom trade organizations for training and collaboration work with Japanese scientists in the use of genomics to understand plant-pathogen interactions.Cano was awarded a doctorate in Plant-Microbe Interactions from The Sainsbury Laboratory at the University of East Anglia, Norwich, England, within the United Kingdom. She earned a Diploma in Molecular Biology and Genetics at the University of Pamplona, in Pamplona, Colombia. Cano completed a Bachelor of Science in Biotechnology Engineering from Francisco de Paula Santander University, located in Cucuta, Colombia.