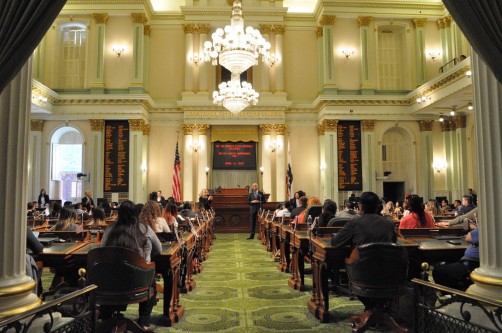 ​Senator Ed Hernandez, chair of the Senate health committee, speaking to CSU public health students on the floor of the Assembly.

Sound public health policy is the foundation for their work and its impact on the state. Every year, nearly 200 CSU students majoring in public health or related health sciences head to the state capitol for the CSU Health Policy Conference and get a unique opportunity to see firsthand how the policy is shaped.

"Funding for public health programs is in the government's hands, so all students need to understand how public policy is made," said Walter Zelman, professor and chair of Cal State L.A.'s department of public health, who created and organizes the event. "Policymaking is an important part of the public health curriculum, whether students go on to create policies or implement them."

This year, about 175 students and 20 faculty members from 16 CSU campuses attended the conference held in Sacramento April 10-12.

Students met and heard from officials involved in creating and implementing health policy including Assemblymember Wendy Carrillo, state Senator Ed Hernandez and Secretary of Health and Human Services Diana Dooley. They also attended a Senate Health Committee hearing and heard from a panel of officials from the California Department of Public Health.

This was the sixth year for the CSU-wide conference. In 2012, Zelman organized the first trip for students at Cal State L.A. He says other CSU public health department chairs took notice and wanted to participate, so he sought the funding and made it an annual systemwide event.

The conference, now funded in large part by a grant from the California Endowment, has generated increased awareness of CSU’s top-notch public health programs and career-ready graduates.

It also helped establish a CSU public health internship, which provides paid internships with the California Department of Public Health in Sacramento for 10 CSU students every year. Zelman hopes that the program can be expanded to other state healthcare agencies like Medi-Cal and Covered California.

Zelman says several students who participated in the new program have already landed jobs within the agency. And a number of alumni who have attended his CSU conference now working as public health professionals.
“One of the most valuable insights students come away with is the fact that many of the legislators, administrators and other policymakers officials the students get to meet and interact with are CSU graduates,” Zelman said. “This is inspiring to students, and gives them a vision of what they can achieve, including the possibility of becoming a healthcare policymaker themselves. It is also suggests the impact of the CSU and its graduates on California government and policymaking.”