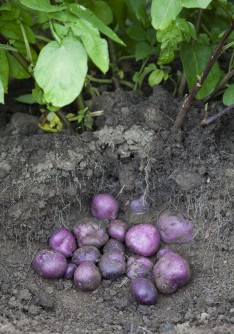 The healthful phytochemicals in purple potatoes lower blood pressure in patients, and white potatoes may do the same.

Newswise — DENVER, Aug. 31, 2011 — The potato’s stereotype as a fattening food for health-conscious folks to avoid is getting another revision today as scientists report that just a couple servings of spuds a day reduces blood pressure almost as much as oatmeal without causing weight gain. Scientists reported on the research, done on a group of overweight people with high blood pressure, at the 242nd National Meeting & Exposition of the American Chemical Society (ACS), being held here this week.

But don’t reach for the catsup, vinegar or mayonnaise. The research was not done with French fries, America’s favorite potato, but with potatoes cooked without oil in a microwave oven. Although researchers used purple potatoes, they believe that red-skin potatoes and white potatoes may have similar effects.

“The potato, more than perhaps any other vegetable, has an undeserved bad reputation that has led many health-conscious people to ban them from their diet,” said Joe Vinson, Ph.D., who headed the research. “Mention ‘potato’ and people think ‘fattening, high-carbs, empty calories’. In reality, when prepared without frying and served without butter, margarine or sour cream, one potato has only 110 calories and dozens of healthful phytochemicals and vitamins. We hope our research helps to remake the potato’s popular nutritional image.”

In the new study, 18 patients who were primarily overweight/obese with high blood pressure ate 6-8 purple potatoes (each about the size of a golf ball) with skins twice daily for a month. They used purple potatoes because the pigment, or coloring material, in fruits and vegetables is especially rich in beneficial phytochemicals. Scientists monitored the patients’ blood pressure, both systolic (the higher number in a blood pressure reading like 120/80) and diastolic. The average diastolic blood pressure dropped by 4.3 percent and the systolic pressure decreased by 3.5 percent, said Vinson, who is with the University of Scranton in Pennsylvania and has done extensive research on healthful components in foods. The majority of subjects took anti-hypertensive drugs and still had a reduction in blood pressure. None of the study participants gained weight.

Vinson said that other studies have identified substances in potatoes with effects in the body similar to those of the well-known ACE-inhibitor medications, a mainstay for treating high blood pressure. Other phytochemicals in potatoes occur in amounts that rival broccoli, spinach and Brussels sprouts, and also may be involved, Vinson added.

Unfortunately for French fry and potato chip fans, those high cooking temperatures seem to destroy most of the healthy substances in a potato, leaving mainly starch, fat and minerals. Potatoes in the study were simply microwaved, which Vinson said seems to be the best way to preserve nutrients.

The American Chemical Society is a non-profit organization chartered by the U.S. Congress. With more than 163,000 members, ACS is the world’s largest scientific society and a global leader in providing access to chemistry-related research through its multiple databases, peer-reviewed journals and scientific conferences. Its main offices are in Washington, D.C., and Columbus, Ohio.

Potatoes are the most consumed vegetable in the US diet. Pigmented potatoes have high concentrations of antioxidants including phenolic acids, anthocyanins and carotenoids. In a single dose study we gave normal fasting subjects 6-8 small microwaved purple potatoes or an equivalent amount of potato starch in the form of biscuits. Post-prandial plasma and 24-hour urine antioxidant capacity was increased by the potatoes and decreased by the starch, i.e. potatoes were in vivo antioxidants and starch was a prooxidant. In a crossover study 18 hypertensive subjects, average BMI 29, consumed either 6-8 purple potatoes twice daily or no potatoes in their normal diet for 4 weeks and then crossed over to the other regimen. Potatoes did not change body weight, lipids or HbA1c. Diastolic blood pressure was significantly decreased by potatoes, -4.3%, a 4 mm decrease. Systolic blood pressure decreased 3.5%. This blood pressure drop occurred in spite of the fact that 14/18 subjects were concomitantly taking blood pressure medication. Thus purple potatoes are an effective hypotensive agent and lower the risk of heart disease and stroke in hypertensive subjects without a weight gain.