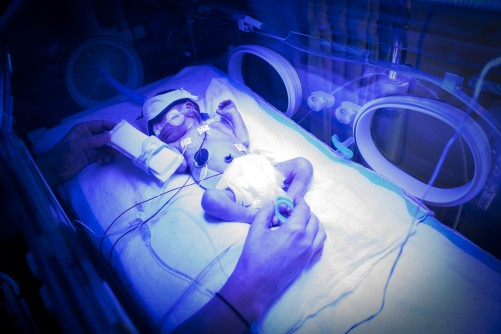 Antenatal corticosteroids given to high-risk moms are associated with better outcomes for babies born prematurely.

• The UAB News Studio is available for live or taped interviews with UAB experts.

Newswise — BIRMINGHAM, Ala. – A new study from the University of Alabama at Birmingham suggests that women at risk of preterm delivery, from as early as 23 weeks of pregnancy, should receive corticosteroids due to strong associations with a lower rate of death and serious illness for their babies. The study, published in the British Medical Journal, says that very premature babies seem to benefit the most from the steroids, even those born at 23 weeks of gestation.

“Indeed, the benefits of antenatal corticosteroids were substantially larger for infants born at the lowest gestations, including less than 28-week infants, for which data from randomized controlled trials are most limited,” said Wally Carlo, senior investigator of the study and director of the UAB Division of Neonatology.

Compared to babies born at term, premature babies carry a greater risk of death or serious complications after birth, with problems tending to be more severe the earlier a baby is born. Infants exposed to antenatal corticosteroids had lower mortality and lower rates of brain bleeding.

Current guidelines recommend giving corticosteroids to at-risk women from 23 to 34 weeks of pregnancy. However, the benefits for lower mortality and morbidity for infants born at less than 28 weeks had been less clear.

“This study supports the administration of antenatal corticosteroids in women with threatened preterm labor from 23 to 34 weeks’ gestation, particularly at the earliest gestations in this range,” Carlo said.