Progress Toward a New Flu Treatment, Thanks to a Small Tweak 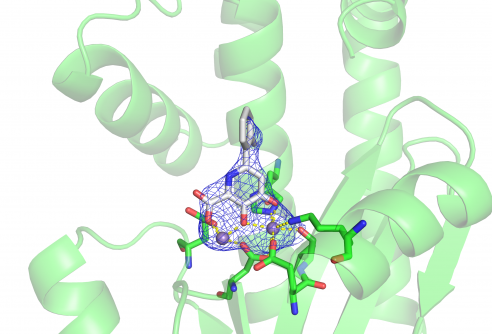 Progress toward a new flu treatment, thanks to a small tweak

Newswise — NEW ORLEANS, March 19, 2018 — This year’s unexpectedly aggressive flu season reminds everyone that although the flu vaccine can reduce the number of people who contract the virus, it is still not 100 percent effective. Researchers report that a tweak to a small-molecule drug shows promise for future production of new antiviral therapies that could help patients, regardless of the strain with which they are infected.

The researchers present their work today at the 255th National Meeting & Exposition of the American Chemical Society (ACS). ACS, the world’s largest scientific society, is holding the meeting here through Thursday. It features more than 13,000 presentations on a wide range of science topics.

“This has been a bad flu season with a highly infectious, aggressive strain, and the inoculation does not appear to be working well. It makes the population, particularly the young and the elderly, vulnerable to serious illness or even death from the simple flu,” Seth Cohen, Ph.D., says.

Since the start of the 2017-18 flu season in October, the Centers for Disease Control and Prevention (CDC) has reported over 65,735 positive tests for the virus in the U.S., resulting in hundreds of deaths. The CDC attributes such an active season to the presence of a particular strain of the virus, influenza A H3N2. Flu vaccines are less effective against H3 type viruses because these pathogens are more likely than other strains to mutate after the vaccine has been produced. Though most years the vaccine is highly effective at keeping people from contracting the flu, this H3 flaw is prompting scientists to seek more reliable treatments.

In order to develop an antiviral drug for influenza, scientists had to find an area within its structure that would prove vulnerable. The influenza virus is a lipid-enveloped, negative-sense, single-strand RNA virus, meaning the genetic information it uses for replication is contained in RNA strands held inside a protein shell that is coated by a fatty layer. Instead of relying on a host’s straightforward DNA replication process as some other viruses do, influenza depends on its own enzyme called RNA-dependent RNA polymerase. So, scientists have consistently focused research efforts on developing a drug that would affect this viral process.

Cohen, who is at the University of California, San Diego and co-founder of Forge Therapeutics, notes that the RNA polymerase complex remains constant across many different versions and mutations of the influenza virus. Therefore any therapies that target it are not likely to suffer from the issue the vaccine faces; namely, the H3 flaw. The RNA polymerase itself is divided into three subunits. Cohen has homed in on a metal-centered domain within one of the subunits.

“One of the major targets has been a particular RNA polymerase subunit that the virus uses,” Cohen says. “It is a nucleic-acid processing protein that is required for the life cycle of the virus, for it to replicate and to propagate, and it is dependent on manganese metal ions.” The subunit relies on two manganese ions to initiate the replication of the genetic information. Scientists have reasoned that a drug that could bind to the manganese ions would shut down the protein’s ability to work, leaving the virus unable to reproduce and spread through the body. This could weaken or perhaps completely stop the virus, thereby treating the flu.

Cohen has spent the past two years uncovering how manganese ions bind within the RNA polymerase subunit in order to develop a better drug that would serve as a wrench in the virus’ replication works. “We modified our small-molecule drug so that it would bind to both manganese ions simultaneously,” he says. He then tested the molecule on the RNA polymerase protein. “The modification dramatically improved the potency of the compound over previous drugs we created,” he says. The team is hopeful that in the coming months, it will be just as effective when they challenge the whole influenza virus with the molecule.

“This is a medicinal intervention that will slow down the virus if not completely stop it,” Cohen says. “The drug could potentially eliminate the virus on its own or just sufficiently slow its reproduction so that the body can ultimately clear it. It’s like taking an antibiotic for a viral infection.”

The researchers acknowledge funding from the U.S. National Institutes of Health.

A bioinorganic-inspired approach for developing inhibitors of influenze endonuclease

Annual influenza epidemics are responsible for substantial morbidity and mortality worldwide. Vaccinations against the influenza virus are generally effective for healthy individuals, but are less effective for the elderly, immunocompromised, or other high-risk individuals. Vaccine efficacy is also dependent on correctly predicting the major serotype among circulating viral strains each season, and incorrect predictions of the infectious strain have previously rendered vaccines less effective. Although antiviral drugs have been developed, the number of antivirals that can be used for the treatment of infections is limited. The viral polymerase complex is an attractive target for new antiviral therapies. Of particular interest is the PA endonuclease domain, which is both highly conserved across strains and serotypes, and is indispensable for the viral lifecycle. In this presentation, the use of bioinorganic-inspired, fragment-based drug discovery (FBDD) to develop endonuclease inhibitors is reported. This approach, beginning with the screening of metal-binding pharmacophores (MBPs) and ending with structure-based drug design, has led to the development of some of the most active endonuclease inhibitors reported to date.