Maria B. Alcívar-Zúñiga moved to the United States from Ecuador when she was 11 years old. Living with just her mother and brother in a small one-bedroom apartment, Alcívar-Zúñiga struggled to adjust to life in America. But she worked hard to learn the language and succeed in school. That eventually led her to Iowa State, where she double majored in women's studies and international studies. In the meantime, she's worked with local immigration organizations in the community, and was recently honored with the K. Patricia Cross Future Leaders Award. Now a PhD student in Human Development and Family Studies, Alcívar-Zúñiga wants to continue her focus on improving and educating people on immigration policy. 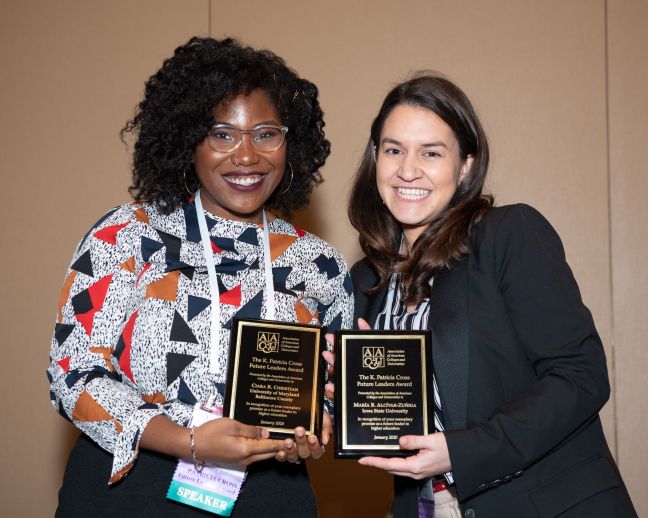 Credit: Provided by the Association of American Colleges & Universities

Maria B. Alcívar-Zúñiga, right, was one of seven doctoral students nationwide selected for the K. Patricia Cross Future Leaders Award.

Newswise — AMES, Iowa — Three days before giving birth to her son, Maria B. Alcívar-Zúñiga found out she won a prestigious award recognizing her leadership, academic accomplishments and community work empowering Latinx youth and families in Iowa.

She was one of only seven doctoral students selected nationwide for the honor awarded by the Association of American Colleges & Universities. Now, she’s back at Iowa State working on her dissertation.

“I was like, ‘This baby needs to come out now,’ because part of the requirements of the award is to attend the conference,” Alcívar-Zúñiga said of reading the email informing her she’d won the award.

“The award was a tremendous honor for me.”

That email arrived 20 years after Alcívar-Zúñiga and her family came to the United States.

From Ecuador to New Jersey

Alcívar-Zúñiga, her mother and brother came to the U.S. from Ecuador in 1999, part of a wave of Ecuadorians who left during the country’s economic crisis in the late 1990s.

She was 11 years old at the time and spoke little English. The family moved into a one-bedroom apartment in West New York, New Jersey, Alcívar-Zúñiga and her brother sleeping in bunk beds in the living room. They were placed in English language learner courses at their school.

“We were treated differently because of that, even among our own peers,” she said. “You’re bullied because you don’t know the language well and because you’re a new arrival, so it was a big shock for us to feel that way, to feel excluded in some ways.”

Alcívar-Zúñiga recalls her mother being afraid to discuss their immigration status, cautioning her children to be careful with what they said and to whom.

“We were trying to figure out a new system in a new country in a new culture, so it was very difficult,” she said. “It was a culture shock. Then I came to Iowa and that was another culture shock.”

Alcívar-Zúñiga came to Iowa State by way of family connections. Her aunt received her Doctor of Veterinary Medicine here. She recruited Alcívar-Zúñiga’s cousins and brother – who earned a master’s degree in community and regional planning from Iowa State.

Alcívar-Zúñiga received her bachelor’s degree in women’s and gender studies and international studies in 2011. She worked for the Assault Care Center Extending Shelter & Support (ACCESS) for three years, working with survivors of domestic and sexual assault in Marshall and Tama counties.

It was while working for ACCESS that Alcívar-Zúñiga became a U.S. citizen after getting married. Today, she has a mixed-status family, since her brother is a Deferred Action for Childhood Arrivals (DACA) recipient and her mother recently got her green card.

“There are small things like that that if changed could potentially save someone’s life,” she said. “When you think about policy, people don’t really think about the impact that it can have on the families and the well-being of people in general.

She earned her master’s degree in family and consumer sciences from Iowa State in 2017.

Her master’s program led her to her current pursuit: finishing a doctorate in human development and family studies by the end of 2020. Her dissertation focuses on the health and well-being of Latinx families and how these are connected to “legal violence,” a framework encompassing restrictive immigration policies and an anti-immigrant climate.

“My ultimate goal is to take this research and put it into practice,” she said. “The reason why I’m interested in this is not only because of my own experience as an immigrant and as a former undocumented immigrant into a U.S. citizen now, but it’s also because when we think about immigrant people, we always think about the southern border, or Mexicans or ‘illegality.’ Nobody really thinks about the 5 million children who live under a household with at least one undocumented parent. And 4.5 million of those are U.S. citizen children.”

Alcívar-Zúñiga wants to work for a research think tank after graduation. Her dream job is to one day become the director of the U.S. Domestic Policy Council.

Putting research into practice in Iowa

“Unstable status, being low-income, not having access to nutritional food … it all interrelates,” she said. “That’s why I’m involved in a little bit of everything.”

Last year, Alcívar-Zúñiga partnered with ISU Extension and Outreach to develop a curriculum promoting career and college readiness among Latinx youth and families. This fall, the curriculum – called ¡Salir Adelante! Caminos a Nuestro Futuro (Pathways for our Future) – will have the opportunity to reach across Iowa’s 99 counties through Extension and Outreach.

“The aim is to foster stronger relationships between parents and youth, between families and educational institutions, and between the community as a whole,” she said. “It’s also to empower families to have more confidence in navigating the educational system and expectations for post-secondary success.”

Education Family and Parenting In the Workplace Immigration Local - Iowa