A solution of cadmium selenide quantum dots glows orange under ultraviolet light. This luminescence forms the basis for their use in bioimaging. 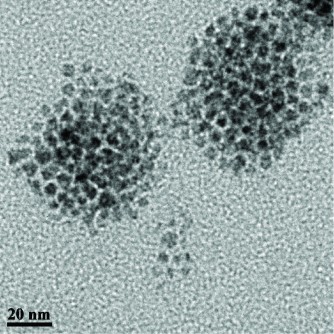 Transmission electron microscopy shows clusters of quantum dots. In application, each cluster is encased in a single capsule with an average size near 50 nanometers.

Newswise — BUFFALO, N.Y. -- A pioneering study to gauge the toxicity of quantum dots in primates has found the tiny crystals to be safe over a one-year period, a hopeful outcome for doctors and scientists seeking new ways to battle diseases like cancer through nanomedicine.

The research, which appeared on May 20 in Nature Nanotechnology online, is likely the first to test the safety of quantum dots in primates.

Two monkeys observed for an additional year also showed no signs of illness.

Quantum dots are tiny luminescent crystals that glow brightly in different colors. Medical researchers are eyeing the crystals for use in image-guided surgery, light-activated therapies and sensitive diagnostic tests. Cadmium selenide quantum dots are among the most studied, with potential applications not only in medicine, but as components of solar cells, quantum computers, light-emitting diodes and more.

The new toxicity study -- completed by the University at Buffalo, the Chinese PLA General Hospital, China's ChangChun University of Science and Technology, and Singapore's Nanyang Technological University -- begins to address the concern of health professionals who worry that quantum dots may be dangerous to humans.

The authors caution, however, that more research is needed to determine the nanocrystals' long-term effects in primates; most of the potentially toxic cadmium from the quantum dots stayed in the liver, spleen and kidneys of the animals studied over the 90-day period.

"This is the first study that uses primates as animal models for in vivo studies with quantum dots," said paper coauthor Paras Prasad, UB professor of chemistry and medicine, and executive director of UB's Institute for Lasers, Photonics and Biophotonics (ILPB). "So far, such toxicity studies have focused only on mice and rats, but humans are very different from mice. More studies using animal models that are closer to humans are necessary."

The cadmium build-up, in particular, is a serious concern that warrants further investigation, said Ken-Tye Yong, a Nanyang Technological University assistant professor who began working with Prasad on the study as a postdoctoral researcher at UB.

Because of that concern, the best in-vivo applications for cadmium-selenide quantum dots in medicine may be the ones that use the crystals in a limited capacity, said Mark Swihart, a third coauthor and a UB professor of chemical and biological engineering. Image-guided surgery, which could involve a single dose of quantum dots to identify a tumor or other target area, falls into this category.

The new toxicity study was supported by the John R. Oishei Foundation, Air Force Office of Scientific Research, Singapore Ministry of Education, Nanyang Technological University, the Beijing Natural Science Foundation and the National Natural Science Foundation of China. The study's lead authors were Ling Ye of Chinese PLA General Hospital and Yong of Nanyang Technological University, who completed his PhD in chemical and biological engineering at UB in 2006.

Caption: A solution of cadmium selenide quantum dots glows orange under ultraviolet light. This luminescence forms the basis for their use in bioimaging. 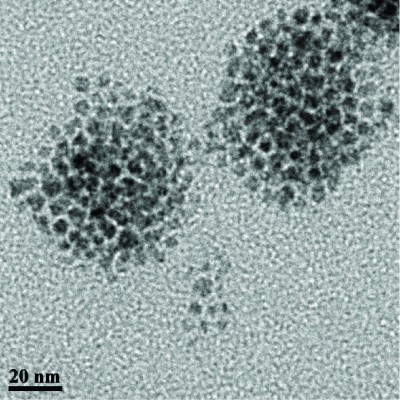 Caption: Transmission electron microscopy shows clusters of quantum dots. In application, each cluster is encased in a single capsule with an average size near 50 nanometers.