Scientists at St. Jude Children’s Research Hospital and the Cancer Research Center in Spain blocked development of acute lymphoblastic leukemia in mice with a genetic mutation that increases the risk of childhood cancer. 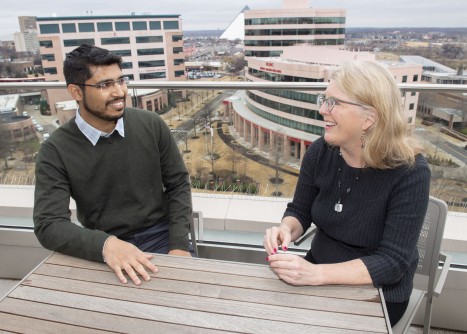 Newswise — Short-term treatment with the drug ruxolitinib prevents B-cell acute lymphoblastic leukemia (B-ALL) in mice that have a genetic predisposition to the disease. St. Jude Children’s Research Hospital and the Cancer Research Center in Salamanca, Spain, led the research. The findings appear today in Cancer Research.

The work provides the first evidence in an animal of a possible strategy to prevent B-ALL. The leukemia is the most common childhood cancer and the leading cause of pediatric cancer deaths.

“I realize these are early days, but I cannot help getting excited about the findings,” said Kim Nichols, M.D., director of the St. Jude Cancer Predisposition Division. “This is the first kernel of hope for a medical intervention to prevent hereditary forms of leukemia or other hereditary cancers in general.”

Nichols and Isidro Sánchez-García, Ph.D., of the Cancer Research Center (CSIC-IBMCC) are corresponding authors of the study. The other senior authors include Carolina Vicente-Dueñas, Ph.D., of Institute of Biomedical Research of Salamanca (IBSAL).

About 5% of children with B-ALL develop the disease due to an underlying genetic predisposition. In these children, abnormal premalignant cells may exist in the bone marrow. While many of these children do not develop leukemia, some do. Currently there is no method to identify children at greatest risk and prevent their disease.

The study focused on B-ALL that arises when children carry one altered and one normal copy of the PAX5 gene. The PAX5 gene encodes a protein that is essential for normal development of immune cells known as B-lymphocytes. PAX5 mutations are among the least common of the germline mutations associated with B-ALL.

Like children with PAX5 mutations, previous research from Sánchez-García, showed that B-ALL develops in a proportion of mice that carry one altered copy of the Pax5 gene, but only when mice are exposed to an immune stress such as an infection. He also showed that the immature B-lymphocytes in these mice are particularly dependent on the cytokine interleukin-7 (IL-7) for their survival. Blocking IL-7 signaling using the drug ruxolitnib led to increased cell death in the laboratory.

Based on this earlier finding, PAX5-mutant mice in this study were treated with ruxolitinib for one month after they were moved from a germ-free facility to one in which they were exposed to common mouse pathogens. The change marked the models’ first exposure to infections. Remarkably, only one of the 29 mice who received ruxolitinib later developed B-ALL. In contrast, eight of the 34 mutant mice who were not treated with the drug later developed B-ALL.

The U.S. Food and Drug Administration has approved ruxolitinib for treatment of several pediatric and adult disorders. The drug inhibits cell signaling molecules called cytokines, including IL-7. In this study, researchers hypothesize that ruxolitinib worked by inhibiting IL-7 and eliminating the premalignant blood cells before they had a chance to acquire secondary mutations that triggered their transformation to full-blown leukemic cells.

“More research is needed to better understand PAX5 B-ALL and how treatment with ruxolitinib works,” Nichols said. One important future step is determining how long children with the inherited PAX5 mutation would need ruxolitinib treatment to prevent B-ALL.

Researchers also want to explore a similar approach to prevent other hereditary cancers, including other B-ALL subtypes that feature pre-malignant cells.

The first authors are Ninad Oak, Ph.D., of St. Jude and Ana Casado-García and Marta Isidro-Hernández, of the CSIC-IBMCC. Jun J. Yang of St. Jude is among 21 other authors.

The St. Jude research was funded in part by a grant (CA241452) from the National Cancer Institute and ALSAC, the fundraising and awareness organization of St. Jude.

St. Jude Children's Research Hospital is leading the way the world understands, treats and cures childhood cancer and other life-threatening diseases. It is the only National Cancer Institute-designated Comprehensive Cancer Center devoted solely to children. Treatments developed at St. Jude have helped push the overall childhood cancer survival rate from 20% to 80% since the hospital opened more than 60 years ago. St. Jude freely shares the breakthroughs it makes, and every child saved at St. Jude means doctors and scientists worldwide can use that knowledge to save thousands more children. To learn more, visit stjude.org or follow St. Jude on social media at @stjuderesearch.