Research on bats funded by National Fish and Wildlife Foundation 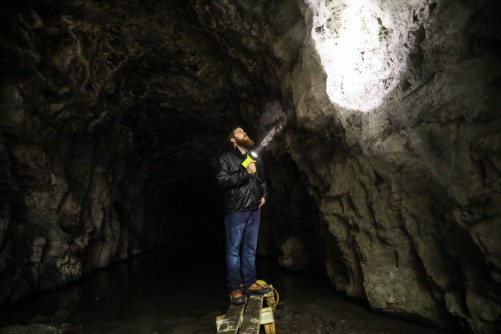 Newswise — Kennesaw State microbiologist Chris Cornelison is among a collaborative team of researchers awarded a $365,000 grant from the National Fish and Wildlife Foundation to combat white-nose syndrome, a fungal disease causing the rapid decline of tricolored bats in Texas.

The research will focus on pursuing treatment trials for the invasive white-nose syndrome with partnering researchers from three higher education institutions – Kennesaw State, Texas A&M and Lock Haven University – and the Texas Parks and Wildlife Department.

“Bats represent 20 percent of all known mammals,” said Cornelison, director of KSU’s BioInnovation Laboratory and one of the co-principal investigators of the grant. “This evolutionary lineage is a precious portion of Earth’s biodiversity and worthy of significant conservation efforts.”

The multi-year grant from the NSFW’s Bats for the Future Fund was awarded to the Texas Parks and Wildlife Department, with a subaward to Kennesaw State for its integrated disease management approach.

“Invasive fungal diseases have a terrible history of devastation and without intervention, these pathogens can drive susceptible species to extinction,” he said. “This reality is responsible for the sense of urgency around white-nose syndrome and the development of feasible management techniques.”

Cornelison is responsible for developing the treatments and monitoring the efficacies of the treatments, and is joined by Melissa Meierhofer, a research associate with Texas A&M’s Natural Resources Institute, who will assist with monitoring for the fungus and white-nose syndrome and gathering census data, and Barrie Overton, a professor of biology at Lock Haven University, who has extensive knowledge of the antimicrobial treatment that will be utilized.

“Texas Parks and Wildlife Department is thrilled to have such an accomplished team dedicated to helping Texas bats, and we are honored to be selected by the Bats for the Future Fund,” said state mammologist Jonah Evans.

White-nose syndrome, first detected in 2006 in New York, is caused by a fungal pathogenPseudogymnoascus destructans, and has spread to 33 states and seven Canadian provinces. The pathogen attacks hibernating bats and has wiped out 100 percent of the population in some sites.

“It is a very unique situation in Texas where 70 percent of the tricolored bat population roosts in roadway associated culverts – manmade, artificial culverts,” explained Cornelison. “We can deliver mitigation strategies to a very large portion of the state’s population without the risk of carry-over effects with local ecology.”

The mitigation efforts include applying high-pressure steam disinfection during the summer when bats are not roosting in the culverts; applying an antimicrobial, polyethylene glycol, to the surfaces within the culverts to suppress environmental proliferation of the pathogen; and applying anti-fungal fumigants (that are being developed at KSU) to the sites while the bats are hibernating.

The Bats for the Future Fund was established in 2016 to provide grants for existing and new disease treatment and management practices to reduce the devastating effects of white-nose syndrome. The BFF is a public-private partnership between the National Fish and Wildlife Foundation, the U.S. Fish and Wildlife Service, the U.S. Forest Service, Southern Company and the Avangrid Foundation. More than $1.1 million was awarded in the 2018 cycle.