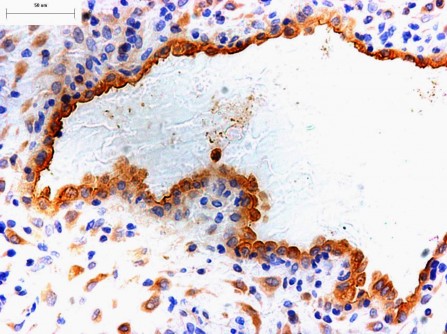 Glycogen is marked in brown in gland cells

Newswise — The mechanism by which embryos receive nutrition during the first 11 weeks of pregnancy has been revealed by University of Manchester scientists.

Writing in this month’s edition of the journal Placenta, they show how glucose and other nutrients are delivered in the early stages of pregnancy before the foetus is large and developed enough to receive a direct blood supply from the mother.

This stage is crucial for the implantation of the embryo onto the wall of the placenta and a successful pregnancy, and as previous studies have shown, nutritional problems at this stage can affect the child’s health for the rest of its life.

The scientists discovered that gland cells in the lining of the uterus store glucose in the form of glycogen. This is then delivered to the placenta together with glycoproteins to be used for energy and converted into the amino acids which are the building blocks for further growth of the embryo.

Dr Carolyn Jones, from the University’s Institute of Human Development, led the study with Professor John Aplin. Professor Aplin said: “A newly created embryo could not survive the full force of arterial blood from the mother, Although it has been known for some time that uterine secretions nurture the tiny embryo, the mechanism whereby the nutrients leave maternal cells and are delivered to the placenta has not been understood.

“The discovery of this mechanism represents a leap forward in what we understand about how nutrients get from mother to child in the womb.”

An earlier study of Dutch women who were in the first three months of pregnancy at the time of a famine at the end of World War Two showed that their children were more susceptible to diabetes, obesity, cardiovascular disease and other health problems than those who had enjoyed the good diet to which the people of Holland usually have access.

The new study explains some of how this crucial stage of development operates, suggesting not just that a healthy diet during the first 11 weeks of pregnancy is essential, but that as nutrients are stored in the gland cells before pregnancy, it is also important to get this right before conception.

Professor Aplin added: “Not much research has been carried out on the very early stages of pregnancy and we’re only just beginning to understand the process of nutrient supply, so we’re not in a position to talk about specific diets which will have an impact beyond the advice given to women in general.

“However, as the study shows, the mechanism for nutrient delivery is quite different at this stage of development and making sure that a good supply of energy is in the gland cells is an important part of ensuring a healthy embryo.”

The paper, ‘Tracking nutrient transfer at the human maternofetal interface from 4 weeks to term’, was published in the journal, Placenta.