Researcher Use Trees to Detect Contaminants and Health Threats 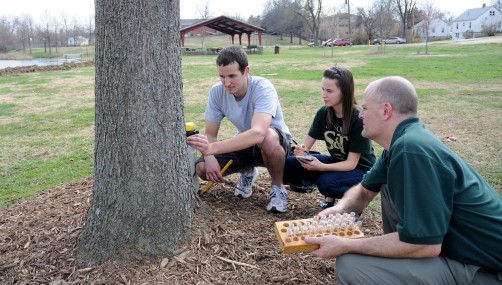 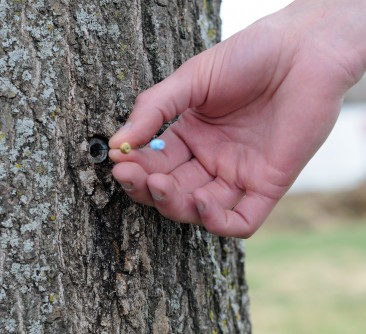 Missouri S&T researchers use a device called a solid-phase microextraction fiber, or SPME, to detect traces of chemicals at minute levels in trees.

Newswise — ROLLA, Mo. – Researchers at Missouri University of Science and Technology have developed a method to detect the presence of soil and groundwater contamination without turning a shovel or touching the water. Instead, they’re using trees.

The process, called “phytoforensics,” takes less time and costs much less than traditional detection methods, says Dr. Joel Burken, professor of civil and environmental engineering at Missouri S&T. In recent years, Burken and his colleagues have tested their method at more than 30 sites in five countries and eight states, including five communities in Missouri.

The process involves coring trunks of trees to gather small samples. In past tests, Burken and his students collected those samples in vials to take back to a laboratory at Missouri S&T for analysis. More recently, however, they’ve been using a specially designed, less intrusive approach that uses a thin filament called a solid-phase microextraction fiber, or SPME, to detect traces of chemicals at minute levels, down to part per trillion or parts per quadrillion.

“The process of core-sampling plants has been around for a while,” Burken says, “but we’re taking a new approach that will improve the process on multiple levels. Sampling is easy, fast and inexpensive for quickly identifying polluted areas or contamination patterns.”

Trees act as nature’s solar-driven sump pumps, soaking up water from the ground by using the energy of the sun and the air around them, Burken says. Through a process known as ”evaportranspiration,” a tree’s extensive root system absorbs all the water it needs. At the same time, the tree absorbs trace amounts of chemicals in that water and transports it above the ground.

Tapping into several trees in an area suspected of contamination can help engineers better and more rapidly delineate contaminants in the subsurface. “The only damage to the site is taking a piece of the tree about the size of a pencil and just an inch long,” Burken says.

The conventional approach to testing for groundwater contamination is much more invasive and arduous, Burken says. Traditional groundwater sampling requires the use of heavy equipment to drill in the ground and the creation of sampling wells to draw water from those sites, Burken says. It also is more expensive and takes longer to cover a site and evaluate the extent and degree of contamination. In Sedalia, Mo., for example, well drilling and testing for the solvents trichloroethylene (TCE) and perchloroethylene (PCE) near an abandoned section of railroad took 12 years and placed 40 sampling wells. Working with the environmental consulting firm Foth Engineering, Burken and a team of students spent one day at the site and took 114 tree samples. Their work more accurately determined the extent and locations of contamination, Burken says. Their research on this project was published in the fall 2009 edition of Remediation Journal.

With his latest technology, Burken and his team bore holes into tree trunks and insert the thin sampling devices into the borings. Each SPME device is thinner than a pencil lead. The devices can be taken back to the analytic laboratories at Missouri S&T’s Environmental Research Center for Emerging Contaminants. But more recently, Burken and his colleagues have used mobile analytical equipment – specifically, a gas chromatography-mass spectrometer – to analyze trees on-site.

In addition to the Sedalia project, Burken, Missouri S&T students and researchers from the U.S. Geological Survey in Rolla have conducted phytoforensic studies at sites in three other Missouri communities – New Haven, Rolla and Sullivan – and may begin work in Vienna soon.

In Rolla, Burken’s students have used phytoforensics to determine the extent of contamination from the Busy Bee Laundry, which is adjacent to Schuman Park. Years ago, Busy Bee provided dry-cleaning services but no longer does so.

By testing trees in Schuman Park, Burken and his team have determined that solvents from the dry-cleaning operation seeped into the groundwater of the park, but not at levels hazardous to human health.

Trees are ideal for detecting solvents like TCE and PCE, says Matt Limmer, a graduate student in environmental engineering who is working with Burken. Such solvents “are all small molecules that are fairly hydrophobic and volatile,” says Limmer, who has received a National Science Foundation fellowship for this research and will begin his doctoral studies at S&T in the fall. “Those are all characteristics that allow TCE and PCE to easily translocate into the plants.”

At Schuman Park, Burken and his students are working with the city of Rolla and Triangle Engineering, a local consulting firm, to remediate the area by planting additional trees to extract the contaminants from the groundwater. This approach, called “phytoremediation,” is expected to remove the contaminants from the groundwater at increased rates and decrease any potential release into Frisco Lake, Burken says.

“The contaminants are partly degraded by the plants,” Burken says, “and party volatilized (vaporized) into the atmosphere, where they react very rapidly in the presence of sunlight and oxygen” and dissipate.

Working with Burken and Limmer is Amanda Holmes, a senior at Rolla High School who enters S&T as a freshman in the fall. The recipient of a Missouri S&T Chancellor’s Fellow Scholarship, she plans to major in environmental engineering.

“I’ve always been passionate about the environment,” says Holmes. “Working on this project has been a great introduction to college life. I love the fact that I’m able to learn through research.”

Through this new funding, the researchers will adjust the method in an effort to detect the presence of small amounts of explosives instead of the chlorinated solvents that contaminate the groundwater in Rolla, Sullivan, New Haven and Vienna, Mo.

The current devices placed in the trees detect molecules as gases, but Burken says explosives constitute a different contaminant type that would need to be detected as liquid. A device able to collect samples of those contaminants would aid the military in cleaning up areas where explosives may have leaked or been spilled on military bases.

Burken also plans to modify the process to detect the presence of pesticides and herbicides. “Twenty-one years ago, I began my career by looking at atrazine (a widely used herbicide),” he says. “Now it seems I’m coming full circle.”

Burken has filed to obtain a patent for his phytoforensic process. The technology is licensed by Foth Infrastructure and Environment, a Midwest engineering firm that is marketing and applying the sampling methods in collaboration with Missouri S&T. 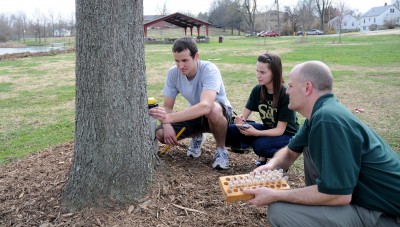 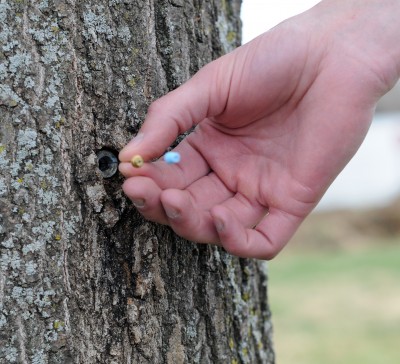 Caption: Missouri S&T researchers use a device called a solid-phase microextraction fiber, or SPME, to detect traces of chemicals at minute levels in trees.