Newswise — A team of Georgia Institute of Technology researchers has created speech-to-text software for Google Glass that helps hard-of-hearing users with everyday conversations. A hard-of-hearing person wears Glass while a second person speaks directly into a smartphone. The speech is converted to text, sent to Glass and displayed on its heads-up display (see a video demo).

A group in Georgia Tech’s College of Computing created the Glassware when one of its own said he was having trouble hearing and thought Glass could help him.

“This system allows wearers like me to focus on the speaker’s lips and facial gestures, “said School of Interactive Computing Professor Jim Foley. “If hard-of-hearing people understand the speech, the conversation can continue immediately without waiting for the caption. However, if I miss a word, I can glance at the transcription, get the word or two I need and get back into the conversation.”

Foley’s colleague, Professor Thad Starner, leads the Contextual Computing Group working on the project. He says using a smartphone with Glass has several benefits as compared to using Glass by itself.

“Glass has its own microphone, but it’s designed for the wearer,” said Starner, who is also a technical lead for Glass. “The mobile phone puts a microphone directly next to the speaker’s mouth, reducing background noise and helping to eliminate errors.”

Starner says the phone-to-Glass system is helpful because speakers are more likely to construct their sentences more clearly, avoiding “uhs” and “ums.” However, if captioning errors are sent to Glass, the smartphone software also allows the speaker to edit the mistakes, sending the changes to the person wearing the device.

"The smartphone uses the Android transcription API to convert the audio to text," said Jay Zuerndorfer, the Georgia Tech Computer Science graduate student who developed the software. "The text is then streamed to Glass in real time."

Captioning on Glass is currently available to install from MyGlass. More information and support can be found at the project website here.

Foley and the students are working with the Association of Late Deafened Adults in Atlanta to improve the program.

The same group is also working on a second project, Translation on Glass, that uses the same smartphone-Glass Bluetooth connection process to capture sentences spoken into the smartphone, translate them to another language and send them to Glass. The only difference is that the person wearing Glass, after reading the translation, can reply. The response is translated back to the original language on the smartphone. Two-way translations are currently available for English, Spanish, French, Russian, Korean and Japanese.

"For both uses, the person wearing Glass has to hand their smartphone to someone else to begin a conversation,” said Starner. “It’s not ideal for strangers, but we designed the program to be used among friends, trusted acquaintances or while making purchases.”

The group is working to get Translation on Glass ready for the public. 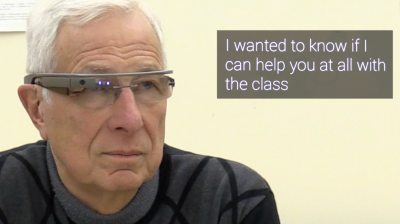 Caption: A hard-of-hearing person wears Glass while a second person speaks directly into a smartphone. The speech is converted to text, sent to Glass and displayed on its heads-up display. 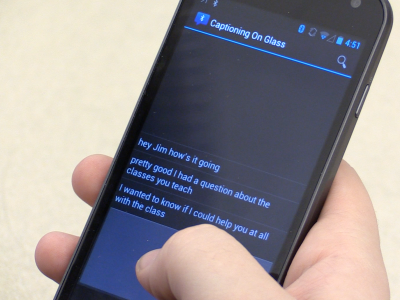 Caption: Captioning on Glass allows a person to speak into a phone. The text is then displayed on Glass. 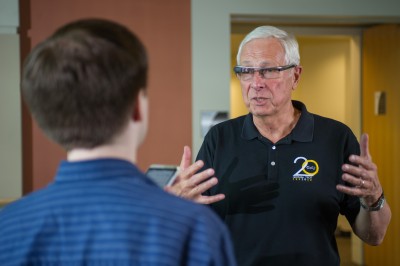 Caption: Georgia Tech School of Interactive Computing Professor Jim Foley has trouble hearing and wanted an app that could help him. He and his team developed Captioning on Glass, which is now available on MyGlass.