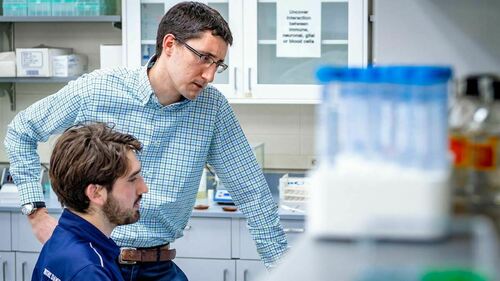 Cody Smith chats with a graduate student in his lab.

Newswise — New research into the way nerve fibers enter the wall of the spinal cord during early development in zebrafish could lead to regenerative therapies for people with injuries to their brachial plexus, a group of nerves that starts at the spinal cord and goes into the arm.

In the study, published in Nature Communications, researchers at the University of Notre Dame determined a widely dismissed hypothesis developed in the early 20th century is actually correct, and serves as the first step in a two-pronged approach by which the fibers, called axons, enter the spinal cord.

“It turns out that axons enter the spinal cord for many days during development,” said Cody J. Smith, the Elizabeth and Michael Gallagher Assistant Professor of Biological Sciences at Notre Dame and at the University’s Center for Stem Cells and Regenerative Medicine. Smith is co-author of the study with Evan Nichols, also at Notre Dame, who is currently studying neuroscience and behavior.

Those nerve fibers send messages to other cells. Axons in the hand and fingertips, for example, help the brain determine what is hot or cold to the touch. When those nerves are stretched, compressed or torn, such as in the case of a brachial plexus injury, it could cause permanent damage and loss of function.

Smith and Nichols used zebrafish larvae to evaluate two hypotheses, one posed by Santiago Ramon y Cajal, a pioneer in modern cellular neuroscience, in the 20th century. Cajal suggested axons used a “battering ram” approach during early development, breaking a hole in the spinal cord wall. The hypothesis turned out to be correct. The results were surprising because Cajal didn’t have access to today’s microscopes, which can show in real time how the fiber enters the wall.

The battering ram approach, however, is just the first step. For several years, scientists have thought boundary cap cells, located within the boundary of the central and peripheral nervous system, were the driving force behind moving axons into the spinal cord.

During the study, Smith’s group found axons break into the spinal cord using Cajal’s battering ram approach, and boundary cap cells serve as a bridge for other axons to travel into the wall.

Knowing this could be important when designing strategies to repair brachial plexus injuries.

“We went into this research interested in the basic science,” Smith said. “How do these axons enter the wall of the spinal cord? But this is a lesson for the general public. Sometimes basic science can lead to discoveries that are completely unexpected, but have a potential and exciting benefit.”