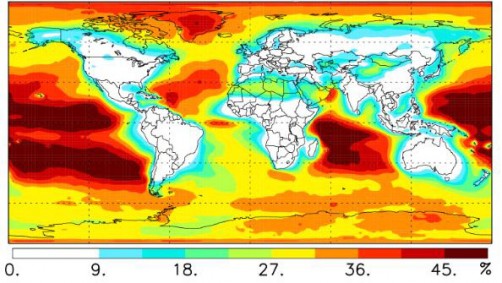 This map shows the fraction of formic acid concentration arising from the new chemical pathway involving nonequilibrium concentrations of vinyl alcohol. This pathway accounts for more than half of the total modeled formic acid production over large areas of the Pacific and Indian oceans. 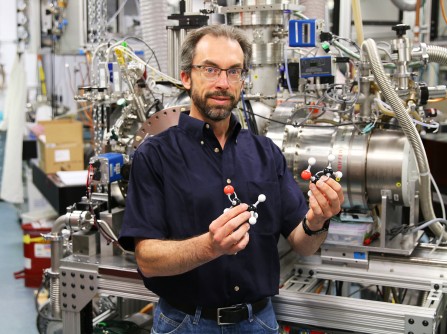 Newswise — LIVERMORE, Calif. — Insights from experiments at Sandia National Laboratories designed to push chemical systems far from equilibrium allowed an international group of researchers to discover a new major source of formic acid over the Pacific and Indian oceans.

In addition to being the smallest organic acid and an important chemical for communication among ants, formic acid is the most abundant organic acid in the global atmosphere and a major source of rainwater acidity. However, global atmospheric models significantly underpredict the amount of formic acid present in the troposphere compared to direct measurements. Because formic acid lies at the end point of hydrocarbon oxidation, this underestimate calls into question current scientific understanding of hydrocarbon degradation in the atmosphere. It is critical to understand the origin of this underprediction, because accurate predictions of air quality and of aerosol impacts on climate rely on a sound representation of atmospheric hydrocarbon chemistry.  The new research highlights how nonequilibrium processes bring models closer to reality, but with an unexpected twist.

Inspired by earlier work led by Sandia researcher Craig Taatjes in combustion chemistry, Sandia physical chemist David Osborn and his colleagues hypothesized that vinyl alcohol could be a chemical precursor to the missing formic acid.

The answer to this puzzle came through Osborn’s explorations of a foundational scientific Grand Challenge from the DOE’s Office of Basic Energy Sciences, which funded the work: to harness systems far from equilibrium. Forcing a chemical system far from equilibrium could allow chemists to explore unusual molecular configurations that may have valuable properties for energy capture and energy storage.

Osborn’s team thought that photons — in particular ultraviolet light — would be an ideal tool to drive a chemical system far from equilibrium, but collisions between molecules inevitably lead to a restoration of equilibrium. For this reason, it wasn’t clear whether the approach would work at atmospheric pressure, where collision between molecules occur about 7 billion times each second.

Using infrared spectroscopy to analyze the molecules after irradiation with ultraviolet light, thereby mimicking sunlight, Osborn and his team confirmed that wavelengths from 300-330 nanometers can rearrange the atoms in acetaldehyde, converting it to vinyl alcohol. The experiments showed that when 100 acetaldehyde molecules absorb ultraviolet photons in this wavelength range, on average four of them are converted into vinyl alcohol. The process persists even at atmospheric pressure, so that molecules that have absorbed light are driven by a factor of 100,000 away from an equilibrium mixture.

His team postulated that vinyl alcohol could be oxidized to yield formic acid, a pathway supported by recent theoretical calculations that predicted a rate constant for this process. With the experimental and theoretical details in hand, Osborn’s collaborators could add this chemistry to local and global models of Earth’s atmosphere to see how it might alter formic acid concentrations.

“This new chemistry produces about 3.4 billion tons of additional formic acid per year in the model, but this only amounts to 7 percent of formic acid in the global model,” Osborn said. “This is not enough to solve the mystery of the missing sources of formic acid that cause models to disagree with experiments. However, this new chemistry accounts for more than 50 percent of the total modeled formic acid production over the Pacific and Indian oceans, a result that was completely unexpected and may explain the previously puzzling origin of formic acid over open oceans.”

Importance of pushing past equilibrium

Since 1999, Osborn has explored the mechanisms of gas-phase chemical reactions at Sandia’s Combustion Research Facility. The high temperatures encountered in practical combustion provide a fertile ground to test fundamental questions of chemical reactivity. Improving the fundamental understanding of chemical change directly addresses Department of Energy goals that span disciplines, such as the ability to transform energy in a controlled way between electrical, chemical and kinetic reservoirs.

“This research shows how photons can push systems far from equilibrium, creating new chemical pathways that could allow increased control over energy transformations, even in environments with many randomizing collisions that seek to re-establish equilibrium,” Osborn said.

The research also demonstrates how DOE-funded basic science can have unexpected impacts in other areas that are important to society, such as atmospheric chemistry. 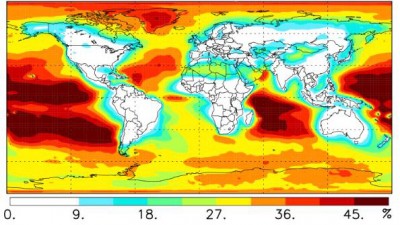 Caption: This map shows the fraction of formic acid concentration arising from the new chemical pathway involving nonequilibrium concentrations of vinyl alcohol. This pathway accounts for more than half of the total modeled formic acid production over large areas of the Pacific and Indian oceans. 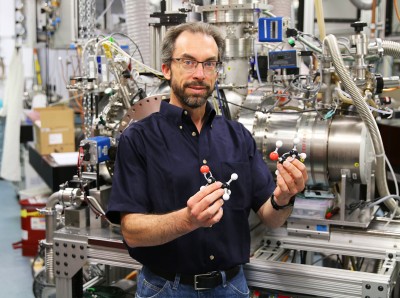