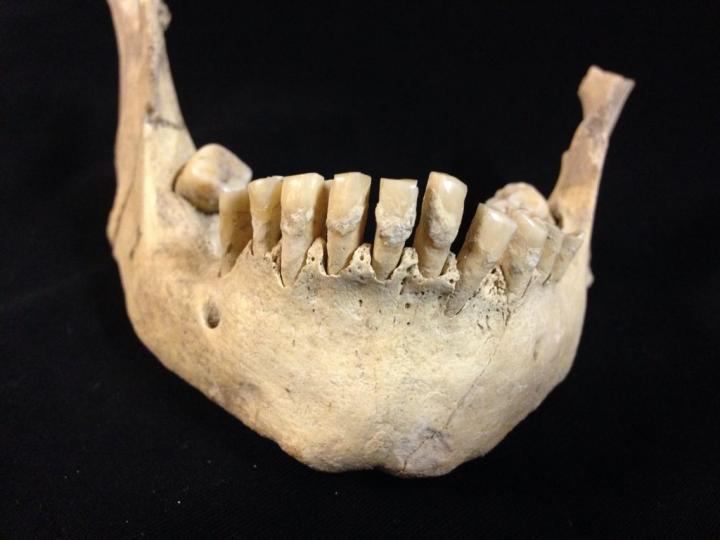 A jaw bone used in the study -- from the collections of the Dorset County Museum.

Newswise — Researchers have found the earliest direct evidence of milk consumption anywhere in the world in the teeth of prehistoric British farmers.

The research team, led by archaeologists at the University of York, identified a milk protein called beta lactoglobulin (BLG) entombed in the mineralised dental plaque of seven individuals who lived in the Neolithic period around 6,000 years-ago.

The human dental plaque samples in the study are the oldest to be analysed for ancient proteins to date globally and the study represents the earliest identification of the milk whey protein BLG so far.

The Neolithic period in Britain ran from 4,000 to 2,400 cal. BC and saw the emergence of farming, with the use of domesticated animals such as cows, sheep, pig and goats, alongside crops such as wheat and barley. Archaeologists have also discovered evidence of complex cultural practices, with Neolithic communities building large monumental and burial sites.

The ancient human remains tested in the study come from three different Neolithic sites - Hambledon Hill and Hazleton North in the south of England, and Banbury Lane in the East Midlands. Individuals from all three sites showed the presence of milk proteins from cows, sheep or goats, suggesting people were exploiting multiple species for dairy products.

Dental plaque can offer unique insights into the diets of ancient people because dietary proteins are entrapped within it when it is mineralised by components of saliva to form tartar or 'dental calculus'.

Lead author of the study, Dr Sophy Charlton, from the Department of Archaeology at the University of York, said: "The fact that we found this protein in the dental calculus of individuals from three different Neolithic sites may suggest that dairy consumption was a widespread dietary practice in the past.

"It would be a fascinating avenue for further research to look at more individuals and see if we can determine whether there are any patterns as to who was consuming milk in the archaeological past - perhaps the amount of dairy products consumed or the animals utilised varied along the lines of sex, gender, age or social standing."

The discovery of milk proteins is particularly interesting as recent genetic studies suggest that people who lived at this time did not yet have the ability to digest the lactose in milk. To get around this, the ancient farmers may have been drinking just small amounts of milk or processing it into other foodstuffs such as cheese (which removes most of the lactose), the researchers say.

'Lactase persistence', which allows for the continued consumption of milk into adulthood, is the result of a genetic mutation in a section of DNA that controls the activity of the lactase gene. However, the mechanisms behind how and when we evolved this ability remain a mystery.

Dr Charlton added: "Because drinking any more than very small amounts of milk would have made people from this period really quite ill, these early farmers may have been processing milk, perhaps into foodstuffs such as cheese, to reduce its lactose content."

"Identifying more ancient individuals with evidence of BLG in the future may provide further insights into milk consumption and processing in the past, and increase our understanding of how genetics and culture have interacted to produce lactase persistence."