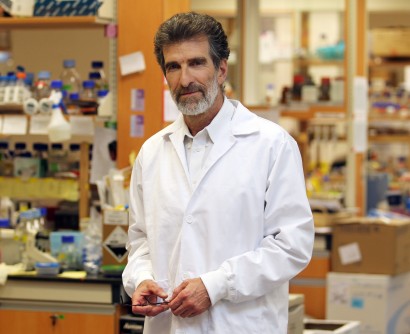 A study led by Professor Daniel Tenen, Director of the Cancer Science Institute of Singapore at the National University of Singapore, found that inhibiting a protein called BMI1 could inhibit the development of lung cancer.

Newswise — Researchers from the Cancer Science Institute of Singapore (CSI Singapore) at the National University of Singapore (NUS), in collaboration with Harvard Stem Cell Institute (HSCI), have discovered a new way in which the development of lung cancer can be stopped. In a study published in the journal Science Translational Medicine in August 2016, the researchers found that inhibiting a protein called BMI1 was able to impair tumour growth in lung cancer. The study was led by Professor Daniel Tenen, Director of CSI Singapore and his associate at HSCI, Dr Elena Levantini, and included Dr Kol Jia Yong, a former CSI Singapore graduate student of Prof Tenen. Dr Yong is one of the co-first authors of the study.

Lung cancer is one of the deadliest cancers in the world, accounting for 30 per cent of tumour-related deaths. Like many solid tumours, lung cancer is very heterogeneous (consisting of cancer cells which behave and respond differently) and hence there is currently no single efficient drug which is able to treat all patients.

Prof Tenen has worked on the differentiation factor C/EBPα for several decades, demonstrating that it is an important tumour suppressor, first in acute myelogenous leukemia, and subsequently, in studies in collaboration with Dr Levantini, in lung cancer. In addition, loss of C/EBPα has also been found to have a role in the development of other cancer types such as hepatic, squamous cell, and prostate cancer. Despite this, the ways in which C/EBPα suppresses tumour formation still remains unknown.

In the past few years, Dr Levantini continued the investigation of C/EBPα in lung cancer. She confirmed that one subtype of lung cancer called non-small cell lung cancer (NSCLC) frequently expressed low levels of C/EBPα. Low or absent C/EBPα resulted in poorer survival when they corresponded with a reciprocally high expression of BMI1, a gene implicated in the development of tumours of colon, breast, and stomach, as well as some forms of leukemia. Dr Levantini then went on to conduct a pre-clinical study in which deleting C/EBPα resulted in NSCLC. Analysis of this study led to the discovery that C/EBPα suppressed lung tumour formation by inhibiting the expression of BMI1. Dr Levantini then demonstrated that reducing the levels of BMI1 by genetic means, or by using a drug reducing expression of BMI1, led to inhibition of tumour formation.

“This study has established an important link between C/EBPα and BMI1 for the first time. Furthermore, these findings suggest that assessment of expression levels of these proteins could be used as a way to predict which patients might benefit from drugs which inhibit BMI1, some of which are currently being evaluated in clinical trials,” said Prof Tenen. Moving forward, knowing the substantial role that BMI1 plays in the formation and development of aggressive lung cancer types, the findings of this study will contribute to the development of better therapies for cancer patients.