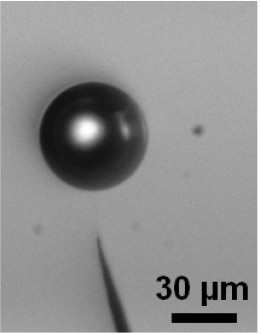 Microbubble immobilized in the solution, above the apex of the nanoelectrode (potential Vm=3V, _ v=1000 Hz).

Newswise — WASHINGTON, D.C., August 9, 2016 -- Controlling bubbles is a difficult process and one that many of us experienced in a simplistic form as young children wielding a bubble wand, trying to create bigger bubbles without popping them. A research team in CINaM-CNRS Aix-Marseille Université in France has turned child’s play into serious business.

They demonstrated they could immobilize a microbubble created from water electrolysis as if the Archimedes’ buoyant force that would normally push it to the surface didn’t exist. This new and surprising phenomenon described this week in Applied Physics Letters, from AIP Publishing, could lead to applications in medicine, the nuclear industry or micromanipulation technology.

While bubbles are observed frequently in nature, it is not easy to control their diameter, position or time of formation. Previous work by the French research team explored how to control the hydrogen and oxygen gas bubbles formed by the breakdown of water using electricity. They showed that if one of the electrodes is tip-shaped -- with a curvature radius at its apex ranging from 1 nanometer to 1 micrometer -- and an alternating electric current with deﬁnite values of amplitude and frequency was used, microbubbles could be produced at a single point at the apex of the nanoelectrode.

In the current work, the team has demonstrated a new and surprising phenomenon: the immobilization of a single microbubble in water. After a bubble is produced (at the apex of the nanoelectrode), it is immobilized by rapidly increasing the frequency of the electric current. It is a stable situation: No matter which direction the electrode moves, the bubble remains above and at the same distance from the electrode.

The team from CINaM-CNRS worked with researchers in acoustics who use ultrasounds for the detection and the characterization of microbubbles. They needed highly calibrated bubbles and the team proposed producing such bubbles using water electrolysis. The team incorporated a number of new ideas and methods in their approach. “While it is usual to consider that electrolysis is controlled by the electric potential, we show that the fundamental quantity is in fact the electric field which is why we use a tip-shaped electrode with a very small curvature radius at the apex,” said Juan Olives, a member of the research team. The use of an alternating current of sufficient frequency then produces “nanoelectrolysis”, which is the nanolocalization of the electrolysis reactions at a single point.

The greatest surprise in the findings was that, although nothing seems to move when you observe the experiment, in fact, all is moving in an apparent steady state, Olives said. Hydrogen and oxygen molecules are continually produced at the apex of the nanoelectrode, they move in the solution and in the bubble, they enter and leave the bubble, and there is a convection velocity in the solution and in the bubble. Everything is moving, except the surface of the bubble, Olives said. 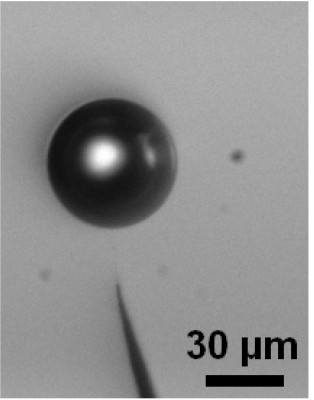 Caption: Microbubble immobilized in the solution, above the apex of the nanoelectrode (potential Vm=3V, _ v=1000 Hz).