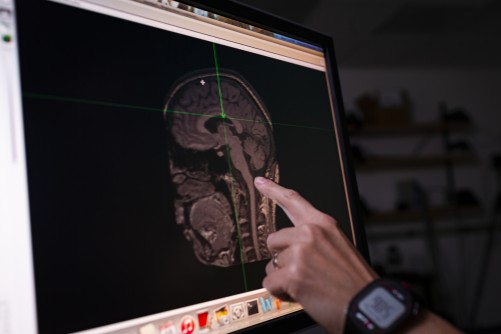 Three researchers from the WVU School of Medicine—Amelia Adcock, Elizabeth Engler-Chiurazzi and Jessica Frey—are investigating whether a treatment called “transcranial magnetic stimulation” can alleviate depressive symptoms in stroke patients. Because prescription antidepressants raise the risk of stroke, they can be a problematic treatment in stroke patients. If TMS proves to be safe and effective, it may become a regular part of the post-stroke treatment regimen. 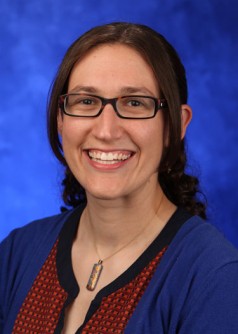 Jessica Frey, a neurology resident at WVU, is researching how transcranial magnetic stimulation can ameliorate post-stroke depression. The treatment is a painless procedure that the FDA has approved for treating major depressive disorder that hasn’t responded to conventional treatments. Its use in stroke patients remains largely unexplored. 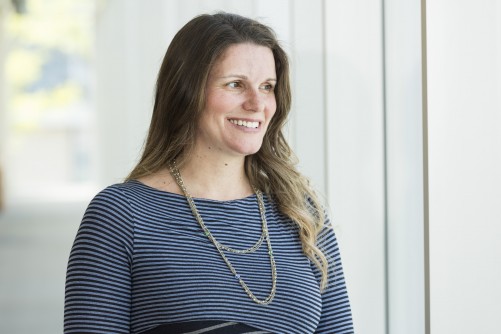 The associate director of WVU’s Stroke Center, Amelia Adcock, is researching whether transcranial magnetic stimulation can treat depression in stroke patients. The FDA has approved TMS for treating major depressive disorder when it doesn’t respond to conventional treatment. Scientists are only now starting to explore how effective TMS can be for depressed stroke patients. 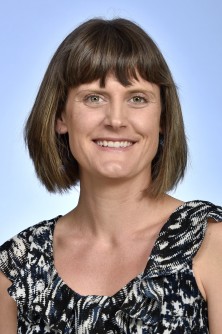 Elizabeth Engler-Chiurazzi is a research assistant professor in the WVU School of Medicine’s Department of Neurology. She is researching how to make depression treatment more effective, including in stroke patients, who are at an increased risk of depression even if their cognitive abilities, motor skills and speech are unaffected.

Newswise — MORGANTOWN, W.Va.—Obstetricians and midwives often warn new mothers about postpartum depression. They might mention what symptoms women should look out for—such as crying spells or extreme irritability—and where they can turn for help. But people who have strokes may not learn that they, too, are at risk for depression.

Post-stroke depression stems from the cardiovascular changes in the brain that lead to a stroke in the first place. It’s a type of depression that scientists are just now starting to probe. At the West Virginia University School of Medicine, a team of researchers is taking a bench-to-bedside look at whether magnetic fields can help treat this unexplored mood disorder.

Amelia Adcock, the associate director of the WVU Stroke Center, Elizabeth Engler-Chiurazzi, a research assistant professor of neuroscience at WVU, and Jessica Frey, a WVU neurology resident, want to find out how a treatment called “transcranial magnetic stimulation” may alleviate post-stroke depression. TMS is a painless outpatient procedure that targets specific areas of the brain with magnetic fields to excite nerve cells. The FDA has approved TMS for use in treating major depressive disorder that medication, therapy and other measures haven’t helped.

Although accumulating evidence suggests that TMS can benefit post-stroke motor recovery, scientists still don’t know whether TMS is effective against post-stroke depression. “Obviously if your arm doesn’t work, that could make you depressed, but even people who have no deficits after a stroke—or very limited deficits—may still have a profound depression,” said Frey. In fact, even if a stroke spares someone’s quality of life—if the patient can still drive to a coffee shop safely, walk unaided across the parking lot and clearly ask for a cappuccino, for example—the stroke in itself is enough to make depression more likely.

Antidepressants may seem like an obvious option for treatment, but they can be problematic for stroke patients. “Taking antidepressants is associated with a higher risk for subsequent stroke,” said Engler-Chiurazzi.

Part of the West Virginia Stroke Center of Biomedical Research Excellence, the pilot study receives support, not only from the National Institutes of Health, but also from the West Virginia Clinical Translational Science Institute, which provides salary support for protected research time through the Research Scholar program and helps fund the work itself.

The project is unusually comprehensive. It includes both a preclinical and clinical arm. “The beauty of this approach is, we’re starting in the same spot, but we’re moving in parallel down this research line, answering sometimes the same—but also sometimes very different—questions,” said Engler-Chiurazzi. “We’re going to get some sense about the mechanistic effects at the same time that we get some sense about the clinical viability of this treatment, and I think that is a strength of this team that many others may not have.”

She added, “If I were sitting here working at the bench, I’d figure out all these mechanisms, but it would be many years before it got to clinic.”

For the preclinical arm of the project, researchers will trigger stroke conditions in animal models, use TMS to treat the resulting depression and observe how symptoms abate. The manufacturer of the equipment, Magstim, has customized the magnetic-field generator, or “coil,” to accommodate the models. “I think it’s the smallest this team has ever made,” said Engler-Chiurazzi. “This is the closest we can come to getting a regional specificity capable of being achieved in a human, but in an animal model.”

About five stroke patients with major depression will participate in the clinical arm of the study and receive TMS treatment. By observing how TMS lessens their depression symptoms, the researchers will gain insight into the treatment’s effectiveness.

Instead of spreading the 20 TMS sessions over four to six weeks—the typical protocol—the researchers will administer it five times a day, for four days. “From a practicality standpoint, patients who live far away or don’t have the time to come for several weeks in a row could get this done all in one quick go,” said Frey.

Given how rural West Virginia is, a compressed TMS schedule could be a boon for depressed stroke patients in the state. Many West Virginians have to travel long distances to reach healthcare providers. The study could help scientists learn if the shorter, intensive treatment regimen would be effective and advantageous for these patients.

In the future, the researchers hope to carry out a randomized controlled trial that’s much larger—one that includes more than 130 stroke patients. Some of the patients will receive actual TMS treatments. The others will sit in the same chair and have the same “coil” moved over their heads, but no magnetic field will be generated. None of the participants will know if they are receiving the real or sham treatments. The researchers will evaluate and compare the outcomes in both groups. What they learn may inform how healthcare providers treat depression in stroke patients.

Even though TMS has earned FDA approval as a treatment for major depressive disorder, its use is far from widespread. If its safety and efficacy hold up to scrutiny, however, Adcock imagines it could eventually be used to prevent—not just treat—post-stroke depression.

“Following a stroke, you have the speech therapist evaluate you, you have the physical therapist see you, you have the occupational therapist see you, and you get your TMS, too,” she said. “I don’t care if you’ve had your two weeks of depressed symptoms or not. Furthermore, it is plausible that TMS enhances stroke recovery beyond its potential effects on mood. So if you’ve had a stroke and are otherwise a candidate, you’re getting treated. That would be my vision down the line. It’d just be part of the standard of care, just another part of stroke recovery.”

She and her colleagues’ work may also shed light on why TMS is effective against depression at all. “We don’t have a great sense—in any population—why TMS is working,” said Engler-Chiurazzi. “There are a lot of ideas. Namely, it might be changing the way neurons connect to each other; it might be changing reactivity to signals in some way; it might be making inflammatory responses that have downstream consequences. It’s doing a lot of things, likely. But we are not yet sure, as a field, what those things are.”

“There’s not been a lot of attention paid to post-stroke depression in general,” said Frey. “That’s kind of why we’re doing this study, because there’s not a lot of evidence for how you treat this.”