20-Nov-2018 7:05 AM EST, by University of Minnesota College of Science and Engineering
favorite_border

Newswise — MINNEAPOLIS (11/20/2018) — A new study by University of Minnesota biomedical engineers shows how they stopped cancer cells from moving and spreading, even when the cells changed their movements. The discovery could have a major impact on millions of people undergoing therapies to prevent the spread of cancer within the body.

The research is published today in Nature Communications, a leading research journal.

Researchers have known for years that tumors have patterns that are like little “highways” that cancer cells use to move within the tumors and ultimately toward blood vessels and adjacent tissue to invade the body. Patients who have high numbers of these patterns in their tumors have a lower chance of surviving the cancer.

What the researchers haven’t been able to figure out until now is how the cells recognize these patterns and move along them.

In this study, the University of Minnesota team examined in the lab how breast cancer cells moved and used medicines to try to stop the cells. When they stopped the mechanisms that serve as the motor of the cells, the cells surprisingly changed the way they moved to an oozing-like motion, almost like a blob.

“Cancer cells are very sneaky,” said senior author Paolo Provenzano, a University of Minnesota biomedical engineering associate professor and a Masonic Cancer Center researcher. “We didn’t expect the cells to change their movement. This forced us to change our tactics to target both kinds of movements simultaneously. It’s almost like we destroyed their GPS so they couldn’t find the highways. This stopped the cells in their tracks. The cells just sat there and didn’t move.”

Ninety percent of cancer deaths are due to the cancer spreading throughout the body. Putting the brakes on cancer cell movement would allow physicians the time to use other therapies to improve survival rates of patients.

“By using these controlled network microenvironments, we were able to test hundreds of cell movement events in hours compared to one or two in the same time frame by imaging a tumor,” said Erdem Tabdanov, a University of Minnesota biomedical engineering postdoctoral researcher and first author of the study.

The next steps for the research team are to expand the types of cancers studied and begin animal trials. Within a few years, the researchers hope to move to clinical trials in humans. They will also study how the medicines interact and what side effects may result. 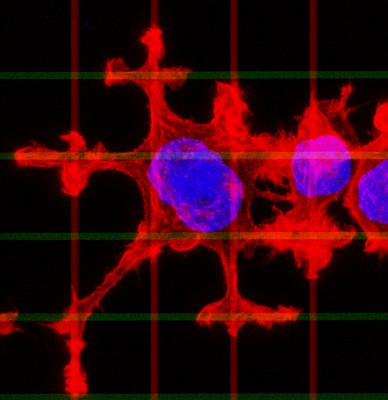 Caption: After targeting the "motors" that generate forces in cancer cells to move, the cancer cells switch to a dendritic or "flowing" response to follow pathways in tumors that drive cell migration and promote spreading of the cancer. 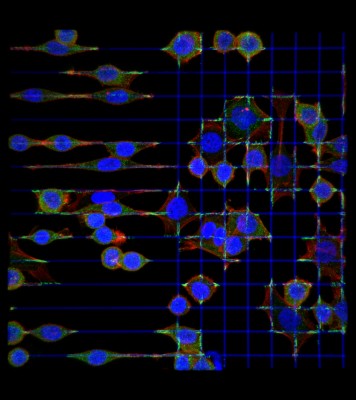 Caption: Cancer cells sense and follow pathways in tumors to move throughout the body. In this image, cancer cells on the right are not directionally biased on grids that mimic fibrous networks, but become highly aligned and migrate directionally on the left in response to patterns that mimic aligned fibers found in living organisms.

Caption: Cancer cells respond to microengineered environments that mimic patterns in tumors that act as "highways" for driving invasion of cancer cells throughout the body.

Caption: Cancer cells switched to alternative flowing or oozing mechanisms to move when their "motors" that generate forces were targeted by researchers.