Return of the wolves: How deer escape tactics help save their lives 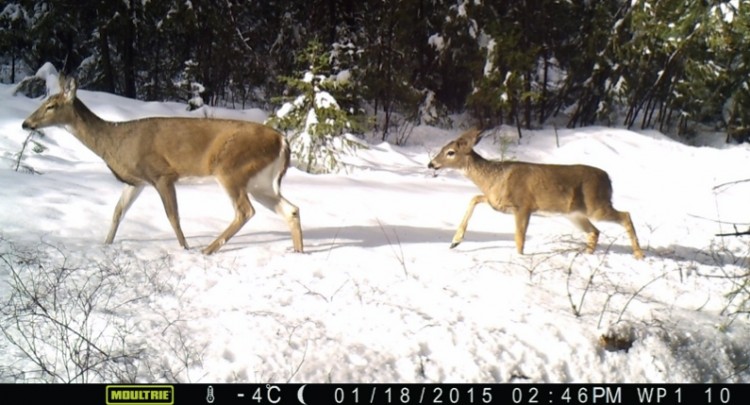 Two white-tailed deer seen in 2015 on a wildlife camera in eastern Washington. 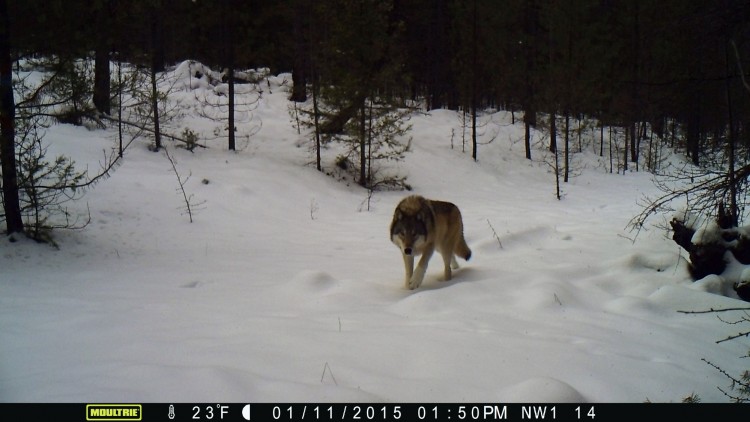 An adult gray wolf is caught on a wildlife camera in eastern Washington in 2015. 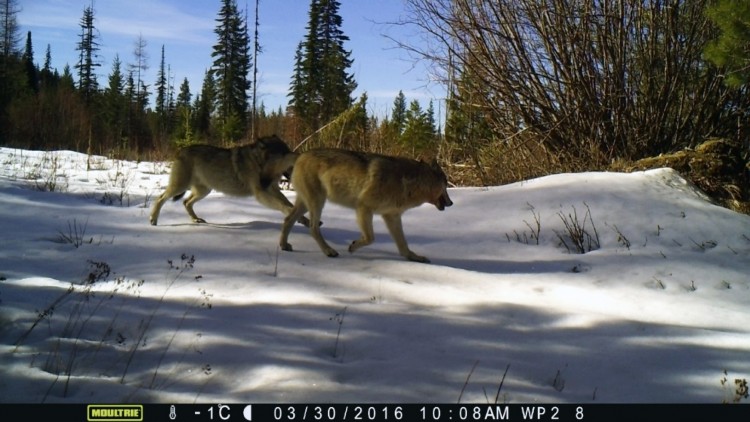 A pair of wolves run across the landscape in eastern Washington in 2016. 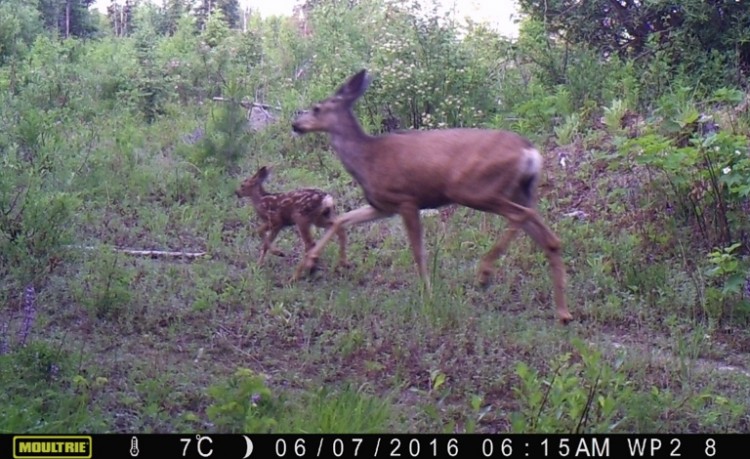 An adult mule deer and fawn pass through the frame of a wildlife camera in eastern Washington in 2016.

Return of the wolves: How deer escape tactics help save their lives

Newswise — As gray wolves continue to make a strong comeback in Washington state, their presence can't help but impact other animals — particularly the ones these large carnivores target as prey.

White-tailed deer and mule deer, two distinct species common in Washington, are among wolves' favorite catch. Wolves will chase deer great distances — sometimes upwards of 6 miles (10 kilometers) — in search of a satisfying meal. How these two deer species respond to the threat of being pursued by wolves in the early years of this predator’s return could shed light on changes to their behavior and numbers.

To help answer this question, researchers from the University of Washington and other institutions monitored the behavior and activity of wolves and deer in Washington for three years. They found that mule deer exposed to wolves, in particular, are changing their behavior to spend more time away from roads, at higher elevations and in rockier landscapes.

"In any particular ecosystem, if you have a predator returning, prey are unlikely to all respond similarly," said senior author Aaron Wirsing, an associate professor in the UW School of Environmental and Forest Sciences. "We show that wolves don’t have a uniform effect on different deer species."

Their results were published in December in the journal Oecologia.

Wolves were completely wiped out from Washington early last century, but began returning to the state from Idaho, Montana and Canada about a decade ago. The latest estimates now show about 200 wolves in packs across eastern Washington.

Aside from their physical characteristics, the two species differ in how they escape from predators. When chased, mule deer "stot," a quick bound with all four legs touching the ground at the same time. This bounding gait helps them negotiate all types of terrain and can give them an agility advantage over predators in rocky, uneven areas where it might be hard to run.

By contrast, white-tailed deer sprint away from predators and rely on spotting them early enough to try to outrun them.

Keeping these known escape tactics in mind, the research team focused on the "flight behavior" of deer living in areas where wolves have returned and in areas without wolves. The researchers chose four distinct study areas, all near the small town of Republic, Washington. All four areas are home to both species of deer, but only two were occupied by known wolf packs at the time of the investigation.

In partnership with the Colville Tribes and the U.S. Forest Service, researchers set up wildlife cameras, captured and put collars on wolves and deer, and monitored the data from all of the collars over three years, from 2013 to 2016. This endeavor involved complex coordination and a dedicated team of UW students who were always ready to respond should an animal enter one of the traps.

"That part of eastern Washington is really special," said lead author Justin Dellinger, who completed the work as a UW doctoral student and now works at the California Department of Fish and Wildlife. "There is huge diversity of large mammals, including all of the native prey populations like big horn sheep, moose and deer. And now we’re starting to see a full complement of native predators, like wolves, here as well."

Overall, the researchers found that mule deer in gray wolf areas changed their behavior to avoid wolves altogether — mainly by moving to higher, steeper elevations, away from roads and toward brushy, rocky terrain. Alternately, white-tailed deer that favor sprinting and early detection as ways to escape from predators were more likely to stick to their normal behavior in wolf areas, sprinting across open, gently rolling terrain with good visibility — including along roads.

"Mule deer faced with the threat of wolves are really changing their home ranges, on a large scale," Wirsing said. "They appear to have shifted kilometers away from where they had been prior to the return of wolves, generally going up higher where the terrain is less smooth and where wolves are less likely to hunt successfully."

These larger shifts among mule deer could affect hunting opportunities. Indeed, some hunters in eastern Washington have already reported seeing mule deer higher on ridges where they are less accessible than in past years, Wirsing said. Hunting for white-tailed deer likely won't change to the same degree with the presence of wolves, the results suggest.

Long term, changes among mule deer in wolf areas could affect other parts of the ecosystem, and perhaps reduce the number of deer-vehicle collisions. These possible impacts are tantalizing fodder for future studies, Wirsing added.

This study was funded by the National Science Foundation, the Safari Club International Foundation, Conservation Northwest, Washington Department of Fish and Wildlife and the University of Washington.

Caption: Two white-tailed deer seen in 2015 on a wildlife camera in eastern Washington.

Caption: An adult gray wolf is caught on a wildlife camera in eastern Washington in 2015.

Caption: A pair of wolves run across the landscape in eastern Washington in 2016.

Caption: An adult mule deer and fawn pass through the frame of a wildlife camera in eastern Washington in 2016.